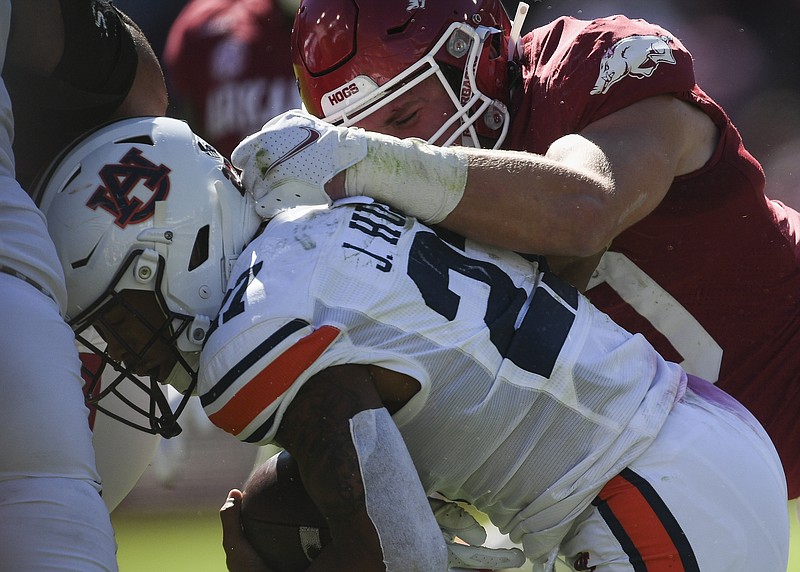 For Razorback fans, it was a September to remember.

It has been an October to forget.

Auburn’s 38-23 victory before a crowd of 73,370 at Donald W. Reynolds Razorback Stadium last Saturday dropped the Hogs to 4-3 overall and 1-3 in the Southeastern Conference following that 4-0 September start.

Arkansas has now lost six consecutive games in the series with Auburn and eight of the past nine. The only SEC team with a longer winning streak over Arkansas is Alabama at 14 games.

Arkansas managed to lose by double digits despite outgaining Auburn 460-427. With 232 rushing yards, the Razorbacks topped 230 yards on the ground for the fifth time this year.

The Hogs were missing three defensive starters due to injury. The good news is that the Razorbacks have three weeks between the Auburn loss and the next SEC game.

I went 4-2 on the picks last week to move to 43-13 for the season. Of those 13 misses, four of them have been Razorback games. I picked them to lose against Texas and Texas A&M. I then turned around and picked Arkansas to win against Ole Miss and Auburn.

Oh well. At least we know how this Saturday’s game at War Memorial Stadium will turn out.

Here are the picks for this week’s games involving Arkansas teams:

Arkansas 64, UAPB 7 — No, the game isn’t going to be close. Who cares? This is history. Arkansas plays an in-state school in football for the first time since 1944. The weather is going to be beautiful. Take some kids to see the Hogs for the first time. Buy them too many hot dogs. Support an HBCU. Enjoy both bands. Take them to the Arkansas State Fair afterward. UAPB fell to 1-5 last Saturday with its fifth consecutive loss, 34-7 to Southern University. The Golden Lions had only 207 yards of offense and committed five turnovers. Again, who cares? You get to watch the UAPB band. You can enjoy barbecue out in War Memorial Park before or after the 11 a.m. kickoff. Have fun.

Louisiana-Lafayette 35, Arkansas State 29 — The Coach Butch Jones era is off to a rough start in Jonesboro. Since beating UCA in the opener Sept. 4, the Red Wolves have lost five consecutive games — 55-50 to Memphis, 52-3 to Washington, 41-34 to Tulsa, 59-33 to Georgia Southern and 52-20 to Coastal Carolina. ASU has had two weeks to prepare for Thursday night’s home game against Louisiana-Lafayette, but it likely won’t matter. Since losing their opener to Texas in Austin, the Ragin’ Cajuns have reeled off five consecutive victories — 27-24 over Nicholls, 49-14 over Ohio, 28-20 over Georgia Southern, 20-18 over South Alabama and 41-13 over Appalachian State.

UCA 31, Lamar 21 — The Bears fell to 2-4 Saturday with a 38-35 loss in Conway to 5-1 Eastern Kentucky. UCA led 28-10 at halftime and then collapsed. A 38-yard field goal attempt with 2:14 left in the game that would have tied the score was blocked. UCA lost despite outgaining its opponent 481-346. Eastern Kentucky didn’t take its first lead until there was just 7:39 left in the game. The Bears go on the road this Saturday and should get well in Beaumont against 2-4 Lamar. The two Lamar victories came by scores of 47-3 against North American and 17-10 against Northern Colorado. The four losses have been by scores of 54-0 to Texas-San Antonio, 56-0 to Abilene Christian, 41-7 to Sam Houston and 24-17 in a second game against Abilene Christian.

Harding 40, UAM 12 — There are four weeks left in the Great American Conference season, and there are four teams tied at the top — Harding, Ouachita, Henderson and Southeastern Oklahoma. They’re all 6-1. This should be a fun final month of GAC football. Harding, which ended Ouachita’s 30-game GAC winning streak on the final Saturday of September, went to Arkadelphia last Saturday and knocked Henderson from the ranks of the undefeated, 46-21. Henderson had come in ranked No. 9 in the country, and Harding was No. 20. Now, Harding is No. 12 and Henderson is No. 20. Harding scored four touchdowns in a 13-minute span at Carpenter-Haygood Stadium to turn a 9-7 lead into a 36-7 advantage in the third quarter. Cole Chancey led the Bisons with 231 rushing yards and four touchdowns.

Ouachita 37, Southern Arkansas 27 — Since losing to Harding, No. 7 Ouachita has outscored its next three opponents 128-27. The Tigers had their most complete game of the season in Monticello last Saturday afternoon as they cruised to a 31-0 halftime lead, rested the starters in the second half and wound up winning 34-0. That secured Ouachita’s 13th consecutive winning season. Ouachita is 28-1 in conference games since the start of the 2018 season. T.J. Cole led the Tigers in Monticello with 151 rushing yards and two touchdowns. The Tiger defense had five sacks. Three of Ouachita’s final four games are at Cliff Harris Stadium in Arkadelphia.

Henderson 45, Arkansas Tech 25 — Expect the Reddies to bounce back in a big way at Arkansas Tech on Saturday afternoon. The Wonder Boys are 2-5 following a 34-17 loss to 3-4 Southern Arkansas in the Murphy USA Classic at El Dorado last Saturday. Tech took a 14-0 lead, but the Muleriders then ran off 31 unanswered points.