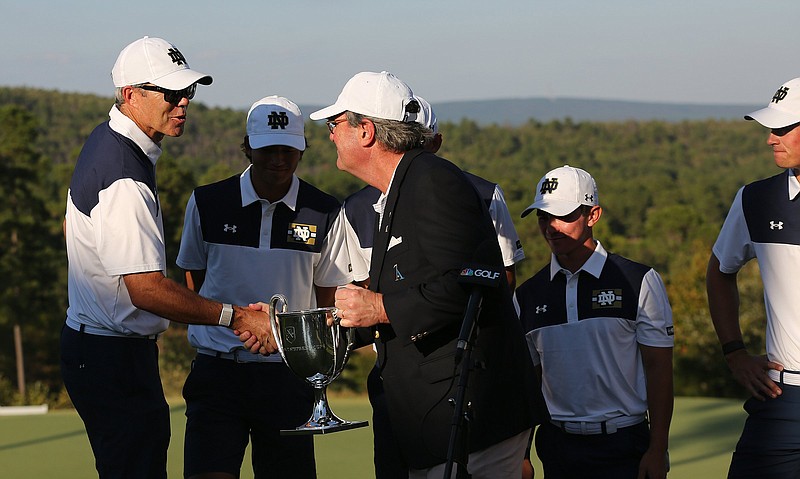 The Fighting Irish earned the No. 1 seed in match play after finishing 20 strokes better than No. 2 Arkansas on Monday and Tuesday, and they were almost as efficient when squaring off with the Razorbacks in man-to-man competition.

"Those guys played great all week," Arkansas Coach Brad McMakin said of Notre Dame, "and we got beat by the better team.

"This is what golf is all about. What a place to be. It was an incredible tournament."

Three days of blue skies, gentle breezes and the ever-present eye of Golf Channel, which broadcast nine hours of the tournament live over the three days, made the experience one Notre Dame will never forget.

"We were just happy to be here," Notre Dame Coach John Handrigan said. "The golf course is amazing. We don't see golf courses like this all the time in college golf. Obviously, our guys were prepared for it."

McMakin's sixth-ranked Razorbacks ended up losing 4 of the 5 matches with the now 11th-ranked Irish, but two of them were not decided until the 18th hole, a 504-yard monster par-4 that got the best of Arkansas.

Notre Dame won the final hole in both matches -- Taichi Kho winning 1-up over Segundo Pinto in the opening match, and 90 minutes later when Andrew O'Leary rallied from 2 down with five holes to play to beat Mateo Fernandez de Oliveira 2 and 1.

Handrigan said the key for the Irish was the preparation they underwent the past several weeks in South Bend, Ind., where they simulated the conditions they knew they were going to see at Alotian.

"Fast greens, all downhill putts, lot of left to right and slope putts," he said. "Undulated lies like we have at our course back home. We prepped pretty well for it."

Notre Dame was the only one of the six men's and women's teams to finish the 54 holes of stroke play under par.

The Fighting Irish had three individuals -- Palmer Jackson (6 under), Kho (5 under) and Davis Chatfield (3 under) -- under par.

Kho's victory over Pinto, a battle between the team's No. 3 players set the tone for the match.

Kho, who squandered a four-shot lead during stroke play to finish third Tuesday, hung on to win his match after leading by 5 with 9 holes to play and by 4 with seven holes remaining.

Pinto kept plugging away on the back nine, the same back nine that got the best of Kho on Tuesday afternoon in stroke play.

The two reached the 18th hole tied, and there were three possible outcomes -- a win by Pinto and a point for Arkansas, a win by Kho and a point for Notre Dame, or they could halve the hole and end up tied with each team earning a half point.

Pinto's second shot, a 3-wood from 275 yards, bounced on the green and rolled into rough behind the hole.

He tried using the slope behind the pin as a backstop for his chip, but didn't hit it far enough, and ended up losing the hole and the match when Kho made a 4-foot bogey putt.

Pinto said match play has a way of bringing out the best in a player.

"I knew I could definitely win it," said the senior from Cordoba, Argentina. "It sucks that it had to end this way, but it was a good match."

"The only thing I was trying to think about was that he was probably more nervous than I am," Pinto said. "In the end, he did a good job on the last hole."

Kho, who played the more difficult back nine at 3 over on Tuesday to fall out of the running for medalist by one shot, said experience helped fuel his ability to weather the storm of emotions Wednesday.

"I just told myself, if I have the will to win, I will win," said Kho, a senior from Hong Kong.

Handrigan was with his player throughout much of the back nine, and his message was the same, even as Kho struggled mightily.

McMakin said part of the reason he put Pinto in the leadoff spot was because of his success at last week's SEC match play tournament, where he won 3 of 4 matches.

"It's really important to get that first point," McMakin said.

It looked so hopeless at the turn that Arkansas assistant coach Barrett Lais moved on to help other players, who were in tight matches behind Pinto.

As Pinto rallied, UA No. 5 seed Juan Vesga and Notre Dame's Patrick Kelly battled back and forth for 14 holes before Vesga got the lead on 15. He won with a birdie on the par-5 17th.

Arkansas' No. 1 player Luke Long was beaten by Notre Dame No. 2 Chatfield, who went 5 up after 8 holes and never relented.

Notre Dame No. 2 Jackson scored a 2-and-1 win over Arkansas No. 3 Wil Gibson after the match was tied at the turn and Jackson leading 1 up through 13.

Vesga, a redshirt freshman from Bucaramanga, Colombia, started the week with a 3-under start in stroke play, a start that included a hole-in-one on the par-3 11th.

Vesga fought back Wednesday from 1 down after 13 to clinch the match with a par on 17.

"It's mostly a team tournament, but in order to get a point for the team, you need to focus on yourself," Vesga said. "Maybe giving that point to the team is the best you can do."

Vesga said Pinto's ability to fight back from five down is emblematic of this Razorback team, which came into the week ranked No. 3 in the golfstat.com rankings.

"We all have that fighting spirit," Vesga said, "and we fight until the end."

Pinto, who had plenty of fight, said before the tournament that one reason he was looking forward to the Stephens Cup was that it was going to be on Golf Channel.

Pinto said he knew it would be an opportunity for family and friends in South America to see what he was doing.

"Yeah," Pinto said, "I think they were watching. I certainly hope they were proud."