OPINION | TAKEOUT TASTINGS: Hitting the bricks and the food trucks 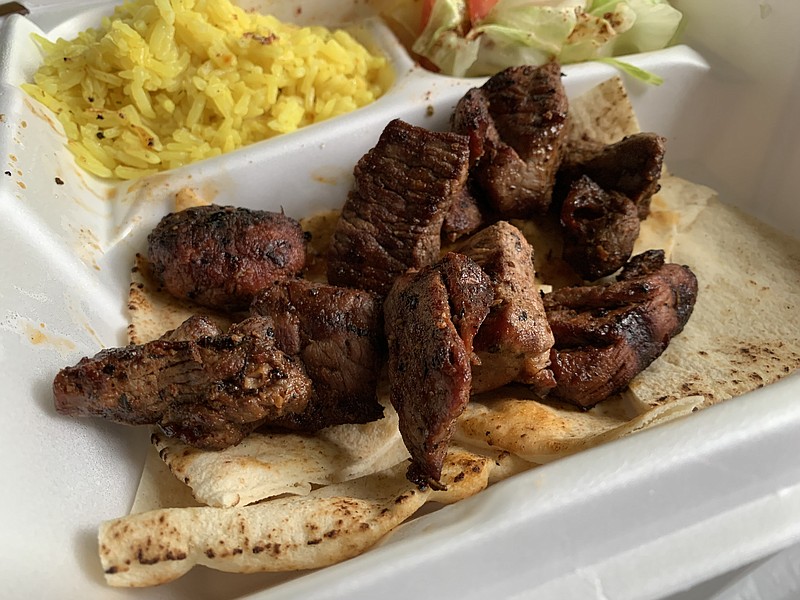 Take it out from the ballgame,

Take it out from the crowd;

Buy me some peanuts from a traveling truck —

This week we focus on to-go items from two food trucks, plus a previously "uncovered" operation and a revisit to an Italian restaurant for a dish for which we'd been jonesing for some months.

As always, we're sticking almost entirely to locally owned establishments, within a slightly flexible 15-minute hope-the-food-stays-hot radius, and paying for all our meals up front. 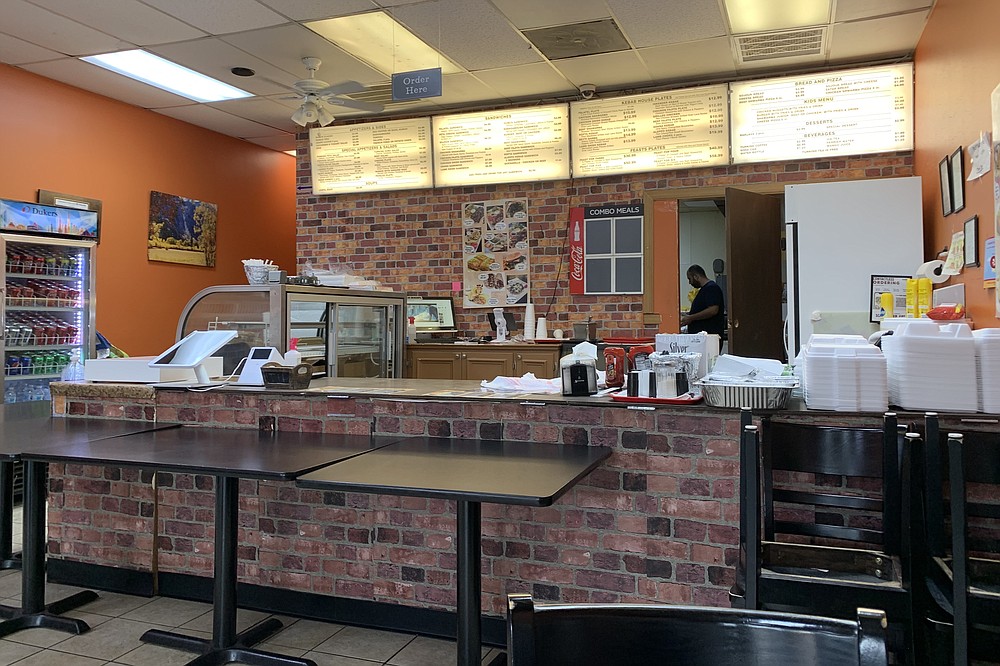 A large menu board behind the front counter at Kebab House offers a wide choice of Medierranean dishes; tables placed in front of the counter helps customers maintain social distance from the employees. (Arkansas Democrat-Gazette/Eric E. Harrison)

Even after scouring our archives, we couldn't believe that, in our continuing course of garnering to-go dishes during the pandemic, we hadn't already dropped in on what was once a favorite west Little Rock venue for Mediterranean dishes. But there it is. We hadn't. The lamb kebab nearly blew us away — about a dozen (mostly) tender chunks of grilled lamb on a bed of thin pita, with tasty yellow rice and a decent small side salad.

HOW IT WENT: Our food came out of the kitchen well within the promised 10-15 minutes. It was still good and hot and good when we got it home.

HOW IT'S GOING: There was in the restaurant one table of two, chowing down on, among other things, chicken that one diner praised as being moister than she could have achieved at home. Our visit was just on the verge of what the guy behind the counter said was a large pending price increase, primarily because the cost of meat — chicken, lamb, beef — has been skyrocketing.

Our pepperoni, beef and mozzarella combo pie from GoldFingers Woodfired Pizza was larger than we could handle for lunch. (Arkansas Democrat-Gazette/Eric E. Harrison)

WHAT WE GOT: Combo pizza (pepperoni, beef and mozzarella, $12)

We'd been circling this food truck for awhile, despite our initial reservations about food-truck pizza — we'd gotten it thus by the slice, which mostly involves reheating pizza that has already been made. But GoldFingers doesn't offer pizza by the slice — it offers whole, approximately 10-inch, made-to-order pies, maybe prepped in advance, but cooked on site. That was a little daunting. The pie wasn't fully round, which is the perfect indication that it wasn't pre-shaped on a round rack and was likely hand-tossed. The crust was a bit puffy; there was a thick layer of mozzarella and just the right amount of tomato sauce, topped with small pepperoni slices and ground beef, and it was delicious. It was also larger than we'd counted on for lunch, so we had to save a couple of slices for later.

HOW IT WENT: Our order of the combo pie was fortuitous, as the pizza maker had already popped one into the oven — don't know if he heard us coming, or what, but it took a couple of minutes off the delivery time, which came to about eight minutes.

HOW IT'S GOING: We dropped in a little late in the lunch period, and there were no customers ahead of us, with one behind us. 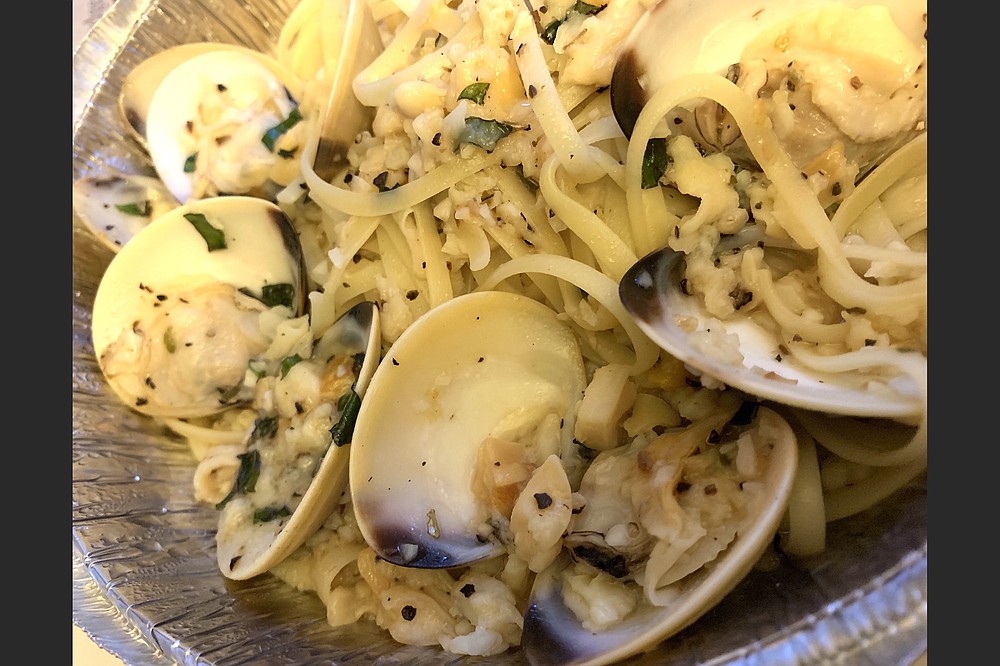 The linguine in white clam sauce was worth a return trip to Rivera Italian Restaurant in North Little Rock. (Arkansas Democrat-Gazette/Eric E. Harrison)

Readers with sharp eyes and memories will recall we did a full review of this place not too long ago, but the lure of this dish, one of our all-time favorites, was so strong that we decided we'd "cheat" and go back for it, to go. It did not disappoint in any respect except in an overage of garlic, which a) wasn't a deal breaker, and b) wasn't enough to limit our enjoyment. The al dente noodles — one of the big pluses we found when we reviewed Rivera in July — were tossed in an olive oil-based sauce with plenty of chopped clams, topped with a handful of actual open small clams and, yes, with a bit more garlic than we were expecting.

HOW IT WENT: We got our food in about 10 minutes even though the kitchen was busy, busy, busy.

HOW IT'S GOING: The restaurant was also busy, busy, busy on a weekend evening, the tables turning over sufficiently quickly so we didn't see anybody having to wait for one, but none that stayed empty much longer than it took the staff to wipe it down and get the next party seated. There were a couple of takeout customers who were picking up orders they had placed by phone or online. 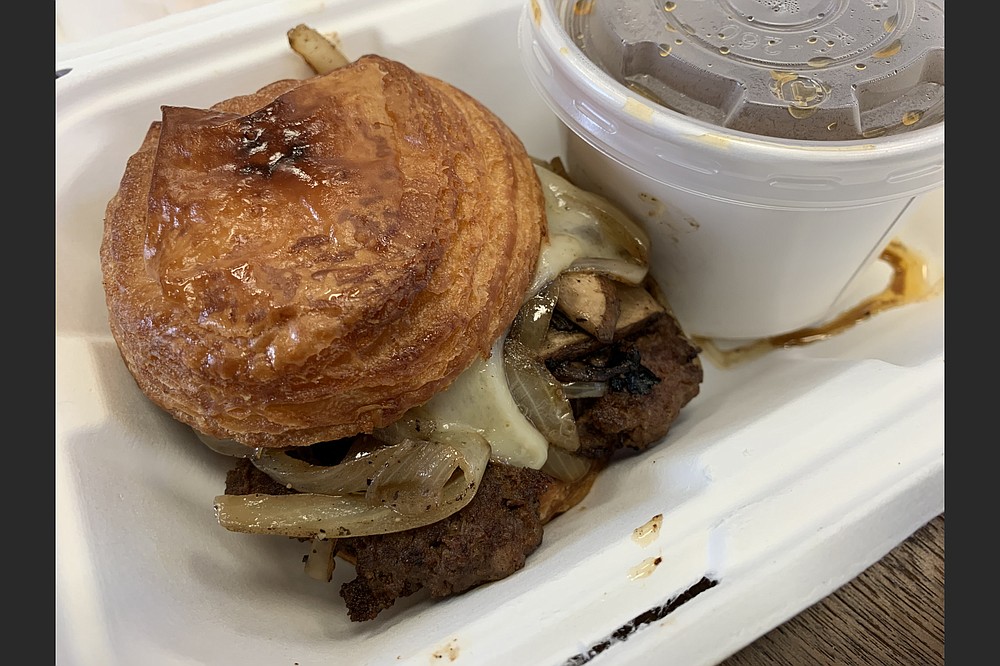 Does The Croissanterie really serve its burgers on croissants instead of buns? Yes, they do. (Arkansas Democrat-Gazette/Eric E. Harrison)

WHAT WE GOT: Mushroom burger ($13), with a side of hot and sour soup

Yes, we did another cheat and went back to a food truck we'd visited in March. But faced with the question of whether The Croissanterie's burgers really came on a croissant instead of a bun, we had to find out. And folks, yes they do. The flaky — but not too flaky — round croissant didn't quite contain the large, thick, well-spiced patty, topped with grilled onions and mushrooms and gruyere cheese (we asked for the spicy mayonnaise on the side, and the burger absolutely didn't need it). It comes with a choice of side items; we got a real surprise with the ample portion of grade-A hot and sour soup (not something we'd expect from a non-Asian establishment); the little paper bag of what we initially thought was potato chips turned out to contain thin chow mein noodles that gave the flavorful soup an extra texture dimension.

HOW IT WENT/HOW IT'S GOING: There were a half-dozen other downtown denizens clustered around the food truck when we arrived, two of whom were ahead of us in line; that extended the time it took us to order by about five minutes; we waited about 15 minutes for our burger to pop out of the window, but that's not bad considering it was cooked to order.