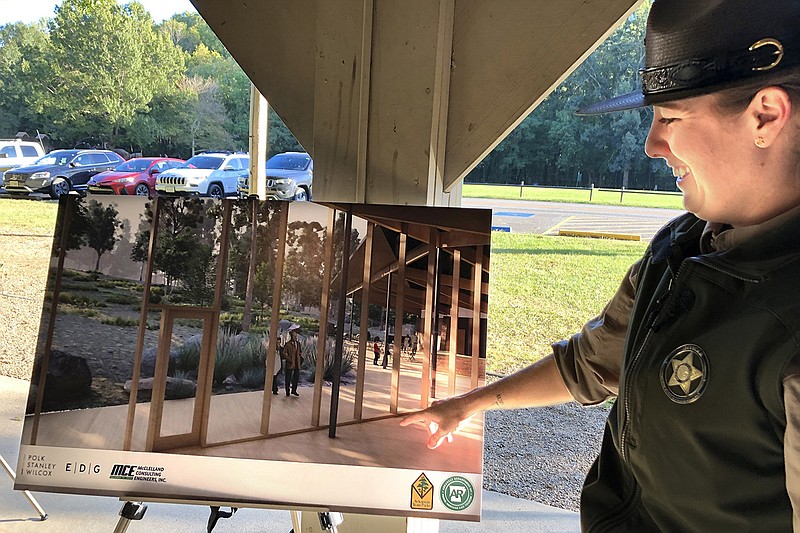 "Our goal is to have this constructed by end of next year," he said, noting that the global pandemic could delay that goal. Bids have not been let, and contractors have not yet been hired.

Officials held an open house Tuesday at the West Summit Pavilion in the park's day-use area, where parks directors, superintendents and staff members spoke with park patrons next to signboard images of the project.

The project would be paid for using revenue collected under Amendment 75, the existing one-eighth percent sales tax devoted to conservation.

The current visitor center has always been too far from the mountain to serve as a reception and education center, Spann said. Built in 1977 at 11901 Pinnacle Valley Road, it's about 3.7 miles -- a 9-minute drive -- from the 2,356-acre park's signature feature, the cone-shaped mountain that rises 756 feet from the adjacent floodplain.

A brochure handed to patrons at Tuesday's open house estimates the cost of the new center at $8,787,395. The proposed 8,191-square-foot, glass-walled interior space would suggest a long pavilion, looking out onto a 5,565-square-foot covered patio with public restrooms, bike racks, interpretive exhibits and seating.

The interior would hold administration offices, a visitor reception and an information desk with a retail sales counter. Food and beverage concession sales would occupy a separate structure.

An estimated $800,000 would go toward educational exhibits, inside and outside, designed and built by Taylor Studios Inc.

Wayfinding signs will be added to hiking and biking trails, and the center will have maps to increase use of the park's trail system.