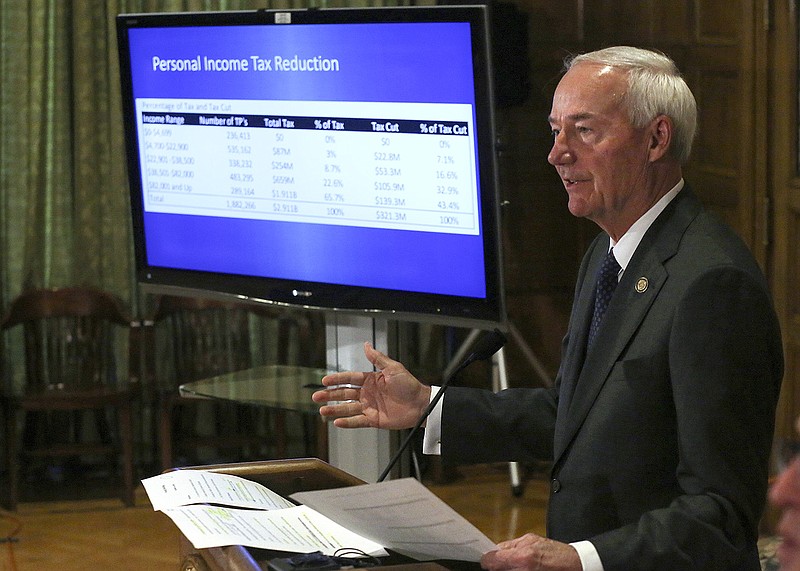 Gov. Asa Hutchinson and some lawmakers believe that Arkansas can afford to cut individual income taxes by more than $300 million over the next two years without negatively affecting critical state services in light of new revenue projections released this week.

Still, some believe that the plan goes too far, while others don't think it cuts taxes enough.

The state Department of Finance and Administration on Tuesday boosted its forecast for total general revenue tax collections by $350.2 million, to $7.3 billion, in the current fiscal year that ends June 30 and by $444.8 million, to $7.7 billion, in fiscal 2023, which starts July 1.

The revised forecast came the same day that Hutchinson outlined his plan to cut individual income taxes across Arkansas' three tax tables, which would also be restructured under the plan.

Hutchinson is in talks with lawmakers to form a consensus on a tax-cut package before calling the General Assembly into special session, which he hopes occurs before Thanksgiving.

Asked what it would mean for the state budget if the Legislature enacted the plan he outlined, Hutchinson said Wednesday in a written statement: "With the revised forecast it would mean that the tax cuts would be absorbed and a surplus in revenue would still result."

State tax refunds and some special governmental expenditures come off the top of total general revenue, leaving a net amount.

Earlier this year, the Republican-dominated General Assembly and Hutchinson enacted a general revenue budget for fiscal 2022 totaling $5.8 billion, including a $17.1 million allocation to a restricted reserve fund.

The finance department on Tuesday also increased its projection for fiscal 2023 net general revenue by $298.5 million, to $6.4 billion.

Asked if the state's general revenue budgets for state-supported programs -- such as public schools, colleges and universities, human services and corrections -- would be essentially flat as the tax cuts take effect, the Republican governor pointed to budget increases this year for education, Medicaid and public safety.

"In terms of public school funding, the FY '22 budget included the largest increase in more than a decade," he said. "The budget also provided for the increase needed in higher education to fund the productivity funding model. We also raised teacher pay. We increased our Medicaid trust fund balance to where it is now close to $600 million in reserves. There is no intent to keep critical state services flat in terms of funding, and each year we will increase education spending as needed."

Hutchinson has served as governor since 2015, and his second four-year term ends in January 2023.

His tax plan would:

• Make adjustments to smooth the tax cliff between tax tables.

Senate Democratic leader Keith Ingram of West Memphis said Wednesday that he doesn't want to lull the public into believing that the state has excess state general revenue without "real needs" to fill, such as reducing the waiting list for people with developmental disabilities and expanding access to pre-kindergarten programs.

"Government isn't fully funded," and it is difficult to justify a tax cut for the wealthiest Arkansans when the state plans to resume taxing unemployment benefits under current state law, he said.

"I think there is a better way to cut taxes in this special session," he said.

Hutchinson said Tuesday that he has talked with legislative leaders about trimming the top corporate income tax rate, and some of that would have to be "triggered," meaning the state would have to meet certain revenue responsibilities to ensure the Revenue Stabilization Act is properly funded.

The governor said there also have been discussions with legislative leaders about further trimming the top individual income tax rate to 4.9%, and he has no objection as long as services are protected and "there is the right trigger."

He said the proposed income tax package is "a super aggressive tax cut" but that the state's long-term reserve fund now totals $1.2 billion, which can serve "as a backstop" in an economic downturn.

Hickey also said the tax cuts could slow the growth of state spending, which many lawmakers want.

"Sooner or later, the federal [surplus] money is going to dry up, and what's the real economy going to look like?" he said.

Jean, who is co-chairman of the Joint Budget Committee, said he believes that the state can afford $200 million in tax cuts "off the bat."

"After that, I'm not sure," he said. "I'm still worried about what the economy will look like in [fiscal] 2024. Eventually, there is going to be a downturn."

Jean said he suspects that "we are going to get somewhere close to the governor's plan," but there is still more work to be done to reach an agreement.

Sen. Larry Teague, D-Nashville, who is a former Joint Budget Committee chairman, said, "We can afford a tax cut, not a giant one, but enough for people to notice it."

"I know that income tax is where the tax cut will go, but I worry about our sales tax," he said in a written statement. "One chart l looked at had Arkansas second behind Tennessee on sales tax. I fear that lowered income tax might put more pressure on sales tax. Seems to me we should have a conversation with the cities and counties regarding capping sales tax so that it can't increase."

Teague said there are many places or institutions in Arkansas that need additional state funds and that the University of Arkansas for Medical Sciences needs an additional tower for patients at the Little Rock campus.

Rep. Howard Beaty, R-Crossett, said the governor's plan is obtainable, and he hopes the individual and corporate rates will be cut even further with an end goal of doing away with individual income taxes.

"I do not anticipate any reductions to services with these cuts," he said in a written statement. "There are always cuts we can make to streamline services and return a high value of services back to the taxpayer. To get to no income tax and I will use the words of [Lt. Gov] Tim Griffin in saying we must 'create a leaner, smarter form of government that does more for less.'"

Republican gubernatorial candidates Leslie Rutledge and Sarah Huckabee Sanders have signaled their support for phasing out the state's individual income tax, but they have not provided details on how to accomplish it. Rutledge has vowed to eliminate the individual income tax in eight years. Sanders hasn't specified a time frame.

Individual income tax collections and sales and use tax collections are the two largest sources of general revenue that are used to help finance state-supported programs, like public schools, colleges and universities, human service programs and correctional programs.

The state's chief economic forecaster, John Shelnutt, said the finance department's increased projections for state general revenue in fiscal 2022 and 2023 are based on the IHS Markit forecasting service's projections for a higher gross domestic product in the United States and Arkansas as well as higher wage and salary disbursements.

The department's projections for increase general revenue collections in Arkansas don't include the impact of the proposed tax cuts, he said.

"It missed a huge pickup in revenue collections in the last few months of fiscal 2021 and continues in the first quarter for fiscal 2022 and may continue in the first half" of fiscal 2022, he said. "It gives us confidence to raise the forecast in short-term."

Shelnutt said he expects state tax collections will return to regular long-term growth levels by fiscal 2024 and 2025 because of the deceleration of various federal stimulus programs.