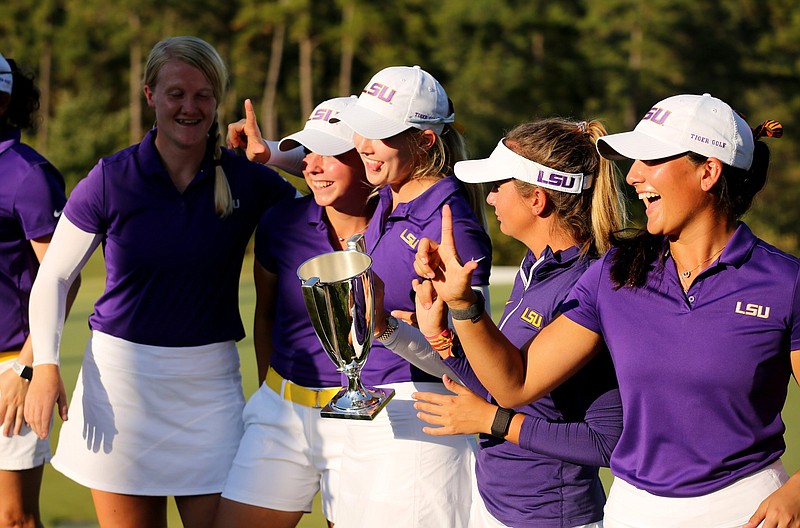 The LSU Tigers women's golf team might have worked itself into a position of early favoritism for next spring's SEC and NCAA Championships.

The Tigers won stroke- and match-play championships in the first Jackson T. Stephens Cup held at The Alotian Club in Roland from Monday-Wednesday.

"I can finally breathe after getting off those greens," LSU Coach Garrett Runion said. "Those are the fastest greens I have ever seen in college golf, but they are so good. You can make putts, so it was a real treat to be out here. Thankfully, [our team] handled it very well."

LSU won the match-play final 4-1-0 over South Carolina on Wednesday, led by a 3-and-1 win by Elsa Svensson over Justine Fournand and a 3-and-2 win by Carla Tejedo over Tai Anudit.

LSU's Ingrid Lindblad was 1 up over South Carolina's Hannah Darling through 16 holes. After Darling drove 270 yards on the 488-yard par-5 17th, she and Lindblad were told the team competition was decided in LSU's favor. Common to match-play team events, Lindblad and Darling left their match where it stood.

Lindblad drove her cart to the 18th green where she hugged her champion teammates.

"I teed up my ball, and someone said, 'We're done,' " Lindblad said. "That can happen sometimes."

Lindblad said he had an up-and-down week.

"Yesterday, I started birdie-double, so I wasn't really sure how it was going to turn out after that, but I played really good after that," she said.

Runion said he was impressed throughout by Lindblad's play.

"She played absolutely great," he said. "The way she was down a couple shots on the second day [of stroke play] and came back to win, she's just a competitor. She's tough to beat."

Lindblad led Darling 3 up through 11 holes, but Darling advanced to 1 down on the following two holes. They then played even until the championship was declared.

Runion the Stephens Cup should assist his team in its 2022 championship pursuits.

"This was a great experience," Runion said.

The University of Arkansas women's golf team completed its three days of stroke- and match-play competition in the first Jackson T. Stephens Cup by losing 2-1-2 to Mississippi in the third-place match at The Alotian Club on Wednesday.

Coach Shauna Taylor said she was impressed by the performance of her team and the experience provided by The Alotian.

"This event didn't leave a stone unturned," Taylor said. "From the golf experience for our student-athletes on a championship golf course against an incredible field makes for a great recipe for an inaugural Stephens Cup."

"Y'all have a great team," Stephens said. "Just keep swinging."

"Incredible week, Mr. Stephens," Taylor said. "You should be proud."

"This week was just better than expectations," Stephens said. "We had just unbelievable weather. The course was in pristine condition, and I think the players really had a great time and enjoyed it, both the team competition and individual competition."