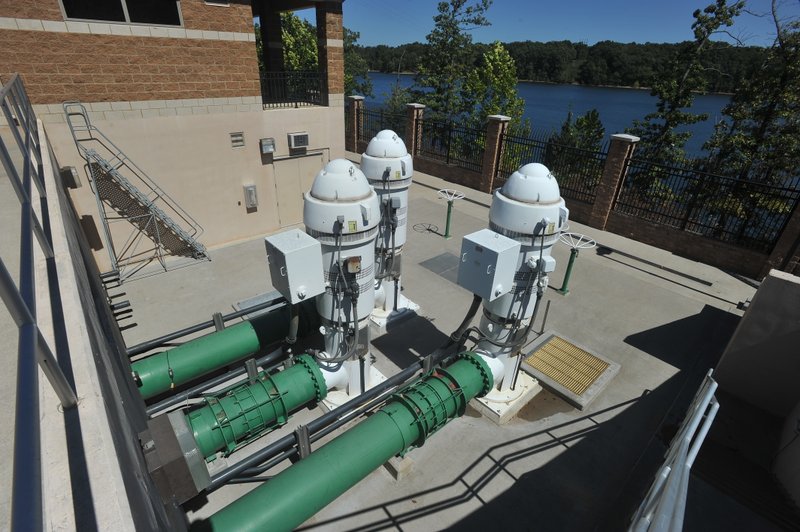 NWA Democrat-Gazette/File Photo The water intake pumps at the north intake facility operated by the Beaver Water District. Each pump is capable of 14 million gallons of water per day.

The system that provides water to much of Northwest Arkansas outside of the largest cities approved a 15% rate increase Wednesday to finance an estimated $50 million in improvements.

"We hit our maximum capacity this past winter, when the temperatures were so cold," Scott Borman, general manager of the Benton-Washington County Regional Public Water Authority, said Thursday.

Water customers throughout region left their faucets dripping to prevent bursting, Borman explained. Also, some water pipes in towns served by the system burst during subzero temperatures this winter, he said.

All 19 million gallons a day the system could pump was used during those coldest days, Borman said. The authority's 13-member board has explored its options since. The board approved the rate increase in a 10-2 vote, he said. The new rates go into effect Jan. 1.

The authority has a contract with the U.S. Army Corp of Engineers to draw water from Beaver Lake.

"No one likes a rate increase, but the board has had a hard look at this for a long time," said James Boston, public works director for the city of Decatur, which has a seat on the board and voted for the increase. "We've had hours and hours of discussion about this for months."

"Mom and Pop aren't going to see much of an increase, maybe $1.50 a month," if cities pass along the increase to their customers, Boston said. "But this will cost our chicken farmers and businesses. We know that. But it's all about being able to provide water."

Ken Hayes, utility manager for Pea Ridge and an authority board member, voted against the measure.

"I wouldn't disagree that something needed to be done, but I think this project is designed to be the first phase of a bigger project than we need," he said Thursday.

How much capacity the improvements will add is still being determined by project engineers, according to Borman. The expected improvements include adding a new pumping station, adding a new line while using as much of the authority's existing easement as possible and increasing water storage. Plans should be complete and specifics on the project available by the end of the year, he said.

Another factor in the expansion decision is the expected growth in much of the county outside of the central corridor where the region's largest cities are, both Borman and Boston said. Western Benton County in particular is growing rapidly, they said.

This is the first rate increase for the system since 2015, Borman said.