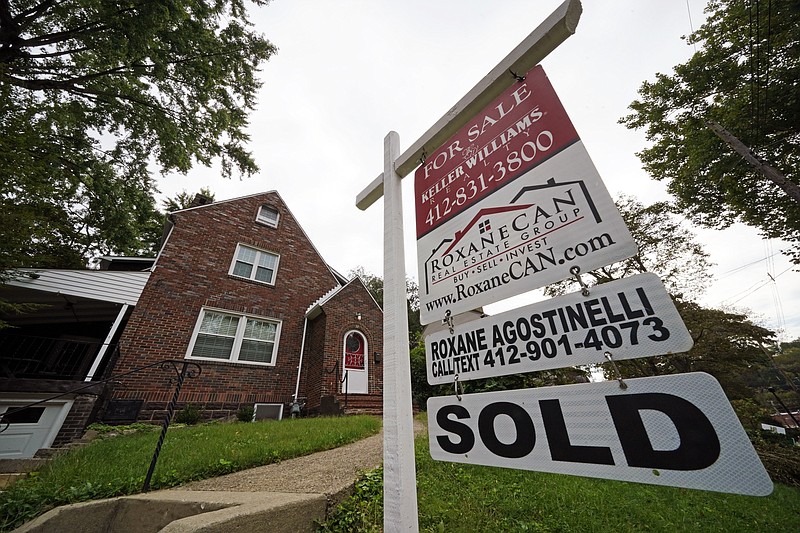 Sales of existing U.S. homes like this one in Mount Lebanon, Pa., bounced back in September to the fastest pace since January. (AP/Gene J. Puskar)

Sales of previously occupied U.S. homes bounced back in September to their strongest pace since January as mortgage rates tick higher, motivating buyers to get off the sidelines.

The National Association of Realtors said Thursday that existing homes sales rose 7% compared with August to a seasonally adjusted annual rate of 6.29 million units. That was stronger than the 6.11 million units that economists had been expecting, according to FactSet.

Sales were down 2.3% compared with September last year, a time when home purchases surged as buyers who had held off during the early months of the pandemic returned in force.

"The increase in sales in the latest month I would attribute to mortgage rates," said Lawrence Yun, the association's chief economist. "This autumn season looks to be one of the best autumn home sales seasons in 15 years."

Yun noted that a dip in mortgage rates in August gave buyers urgency to close deals, which translated into the sharp September increase in completed transactions.

While the average rate for a 30-year mortgage remains near a historic low, it has been inching higher since August, when the weekly rate averaged 2.77%, according to mortgage buyer Freddie Mac.

This week, the average rate rose to 3.09%, the highest level since April, when it peaked at 3.18%. A year ago, the rate averaged 2.8%. When mortgage rates rise, it gives would-be homeowners less buying power.

Economists expect mortgage rates to hit 4% next year as the Federal Reserve takes action to control rising inflation. The central bank is widely expected to announce a timetable for reducing its monthly bond purchases at its policy meeting next month. Those bond purchases have helped keep mortgage rates at ultralow levels for much of thepast 18 months.

The rise in prices continued to weigh on first-time buyers, who accounted for 28% of all sales last month. That's the lowest level since July 2015, the association said.

Homes purchased in cash rose 23% in September from the previous month. Individual investors, who account for many cash sales, accounted for 13% of all home sales last month.

Despite the sharp increase in sales last month, there are signs the housing market frenzy that drove 20% to 25% annual increases in the median home price is easing. Properties on the market are receiving fewer multiple offers and buyers increasingly are refusing to waive their right to a home inspection or appraisal, Yun said.

Still, the inventory of homes on the market remains tight in much of the country, which continues to support higher prices.

At the end of September, the inventory of unsold homes stood at just 1.27 million homes for sale, down 0.8% the previous month and down 13% from a year ago. At the current sales pace, that amounts to a 2.4-month supply, down from 2.7 months a year ago, the association said.