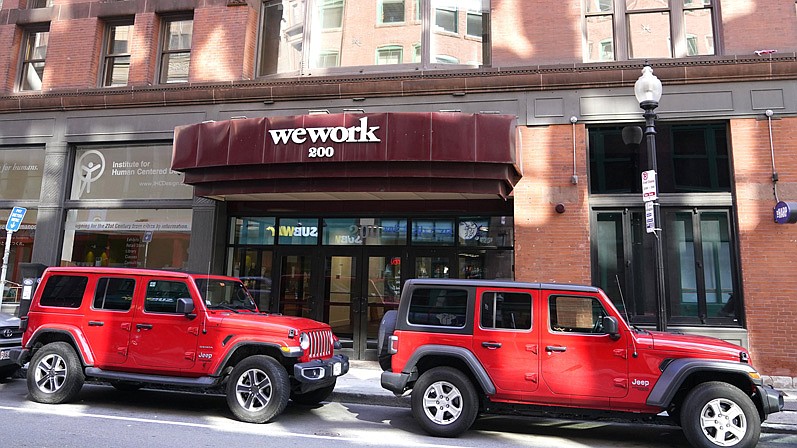 The WeWork logo is affixed to a building in Boston. The co-working company started trading on the New York Stock Exchange on Thursday, its second attempt at a stock offering following a failed attempt two years ago. (AP/Charles Krupa)

Two years after WeWork's attempt to become a public company flamed out spectacularly, the co-working giant started trading on the stock market Thursday, hoping that investors will now believe in its prospects.

The earlier effort collided with concerns about WeWork's breakneck growth, its huge losses and the alarming management style of its co-founder Adam Neumann. WeWork has new leaders who have pared back its expenses and hope to exploit an office space market that has been upended by the pandemic. But the company still has lofty growth targets, big losses and many empty desks in its 762 locations around the world. And WeWork made it through the last two years only because of huge financial support from SoftBank, the Japanese conglomerate that is WeWork's largest shareholder.

"We got here on a different road than we anticipated, but we're here," Marcelo Claure, WeWork's executive chairman and a senior SoftBank executive, said in an interview Thursday with CNBC.

Instead of an initial public offering, WeWork entered the public markets by merging with a special-purpose acquisition company, something of a craze these days. It is expected to raise as much as $1.3 billion from the deal, a sum that includes stakes held by the investment firms BlackRock and Fidelity. At the stock price Thursday, WeWork is worth about $9 billion, a fraction of the $47 billion valuation placed on the company before investors soured on it in 2019. Shares in the acquiring special-purpose acquisition company, called BowX, were issued at $10. In early trading Thursday, shares in WeWork -- with the ticker symbol WE -- were trading as high as $11.10.

WeWork leases office space and charges membership fees to customers -- including freelancers, startups and small and large businesses -- to use it. Its business rests on the belief that people might prefer the flexibility of such an arrangement over a traditional office lease, which can last for years and have other burdensome conditions.

Though flexible office space was not new, WeWork said its business could not only revolutionize how people worked, but also change how people lived and thought. Neumann attracted billions of dollars in investments, with the biggest coming from SoftBank, which ended up bailing out WeWork when it withdrew the 2019 initial public offering and was in danger of bankruptcy.