Lions, Hogs: Wait is over 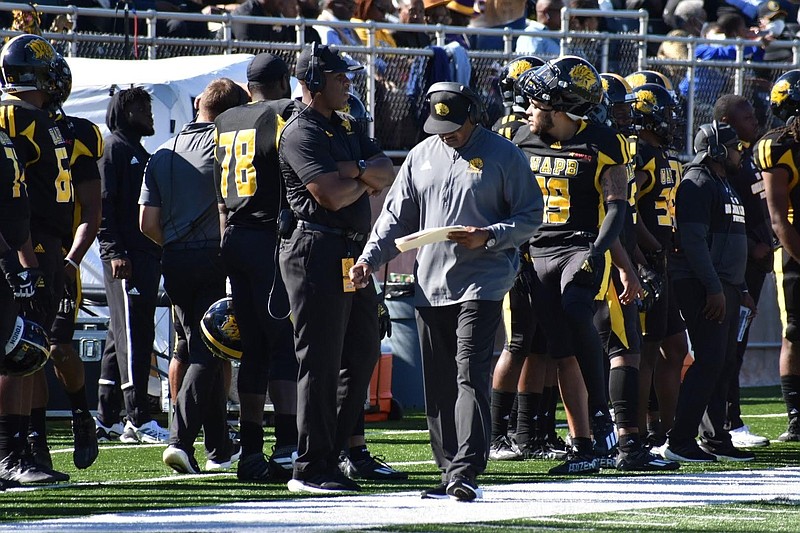 UAPB Coach Doc Gamble paces the sideline during an Oct. 16 home against Southern. Gamble is hoping his team can clean up play in the first football game the University of Arkansas has ever played against an opponent from within the state. (Pine Bluff Commercial/I.C. Murrell)

In doing so, Arkansas has called on other schools, some in the Football Championship Subdivision (the lower level of Division I football), for a so-called "money game," offering a nice payday to the opponent. But no other university in the state has reaped such a reward from the Razorbacks, never getting the chance to line up face-to-face with a big-name program and try to win a few marbles from the state's highest-profile program, let alone share the same spotlight.

UAPB (1-5, 0-4 Southwestern Athletic Conference) gets the chance for which other programs in the state have waited 77 years, but to the players, it's not about the reported $600,000 their program will receive from today's game, set for an 11 a.m. kickoff at Little Rock's War Memorial Stadium. The game will air live on the SEC Network.

It's all about taking on the toughest competition available.

UAPB vs. Arkansas is a chance for players like sophomore linebacker Monroe Beard III to compete against a team on a higher level.

The winner of this game will end a tough losing skid in a season of such high hopes.

Under second-year Coach Sam Pittman, Arkansas (4-3, 1-3 Southeastern Conference) was ranked as high as No. 8 following a win over Texas A&M University, but has fallen out of the AP Top 25 with losses in the past three weeks to now-No. 1 University of Georgia, Ole Miss and Auburn University. Arkansas went for a game-winning two-point conversion at the end of the Ole Miss game but was denied.

Both Arkansas and UAPB have dealt with injuries among key playmakers. The Golden Lions have been missing All-America return specialist Tyrin Ralph for weeks due to an emergency oral surgery, and Coach Doc Gamble also listed injuries among his linemen and defensive secondary.

"They're not going to stop play because you don't have your good guys ready to go," Gamble said. "We're battling through some injuries and things like that."

Arkansas is playing at War Memorial Stadium for the first time in two years, as covid-19 forced changes in the Razorbacks' 2020 schedule.

Arkansas is coming off a 38-23 loss to Auburn despite outgaining the Tigers 460-427 in total yards. Still, the Hogs have enjoyed some success in their passing attack this year.

Redshirt sophomore K.J. Jefferson has thrown for 1,463 yards and 11 touchdowns, in addition to rushing for 386 yards and five touchdowns. Jefferson, who on Friday was added to the Manning Award watch list, leads the SEC and ranks eighth in average yards per completion at 14.6.

The Hogs' rushing game has produced 243 yards per game this season and will likely give the Lions' defense -- which allowed Southern freshman Kobe Dillion to rush for 267 yards last week -- plenty of fits.

SIZING UP THE LIONS

UAPB averages 22.3 points per game and hasn't scored more than 30 points since blowing a 19-point lead against Alcorn State on Sept. 23, losing 39-38.

The Lions total 324 yards per game but have given up 413.5. Offensively, they lean more on the pass (197.5) with quarterbacks Skyler Perry and Xzavier Vaughn sharing time.

Perry has started every game but Vaughn has given the offense mid-game sparks.

"Coach always tells us it's not about the other team," Beard said. "We're looking to clean up our mistakes and play a perfect game. Everybody's got to get back on one string and play the defense we know we're capable of playing."