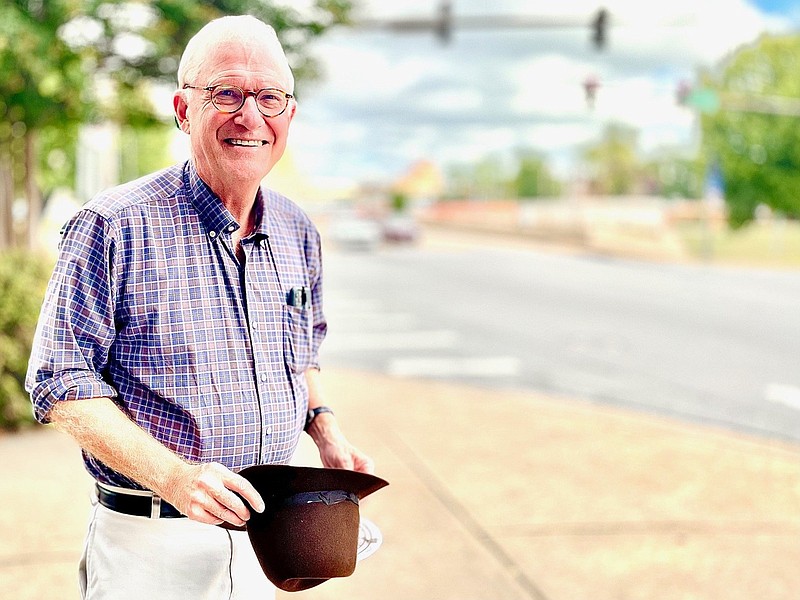 Christoph Keller, III, former Dean and Rector of Trinity Episcopal Cathedral in Little Rock, has written a book of funeral homilies. In nearly four decades of ministry, he has spoken at hundreds of funerals; 12 of those messages are included in “Getting on Toward Home and Other Sermons by the River.” (Arkansas Democrat-Gazette/Frank E. Lockwood)

With his death approaching, Richard Milwee, the former archdeacon of the Episcopal Diocese of Arkansas, approached a longtime friend and fellow priest, Christoph Keller III, about the message Keller would deliver at the funeral.

"I want you to tell the truth, and nothing but the truth, but not the whole truth," Milwee said, Keller recalls in his new book, "Getting on Toward Home and Other Sermons by the River."

It's an approach embraced by Keller, the former dean and rector at Trinity Episcopal Church in Little Rock.

"Be truthful and be tactful. Those are two good rules for preaching funerals," he writes.

Keller's collection of homilies pays tribute to a dozen departed souls, some who lived long on the earth, others who died far too young.

He will talk about his book and read an excerpt on Tuesday at noon at the Cathedral, as part of the Six Bridges Book Festival. More information is available at cals.org/six-bridges-book-festival/event/christoph-keller/.

In an interview, Keller said it's appropriate to skip unflattering details when discussing the deceased.

"Preaching a funeral is not investigative journalism," he said. "This is not going to be the moment where you give kind of a balanced assessment of their pros and cons. That's not what we're here for today."

While omissions are fine, the message must be honest, he said.

The words that leave the minister's lips can ease pain or compound it, he noted.

"There's power in that pulpit. You can say the same thing somewhere else that's kind of marginal and it's not that big a deal. People that are there [for the service], they're captive in a church, surrounded by this aura of sacredness. They can't talk back, and if you say something there that hurts, it sticks," he said.

Episcopalians are accustomed to shorter discourses, he said.

"In the Episcopal Church, if you go over 12 minutes, you're on borrowed time," he said.

It takes about eight hours to write a funeral homily, Keller estimated.

The ones that Keller includes are deeply researched and accompanied by footnotes.

Sometimes, he quotes family members' recollections. Occasionally, he'll quote from writings that the deceased left behind.

The homily for William Leake Terry, a Little Rock lawyer and World War II veteran who died on Dec. 25, 2016, at age 94, begins with an episode from "The Crown," when a young Queen Elizabeth II encounters Winston Churchill. It closes with quotes from the Apostle Paul and with passages from Terry's war diaries.

The British prime minister and Terry had crossed paths in Halifax, Nova Scotia.

On Sept. 10, 1944, aboard a homebound troop transport ship called the Queen Mary, Terry wrote that he had seen "Mrs. Churchill ... and after her the old boy, smoking the biggest cigar that I ever saw." After a meeting, "they came back out and waved to us for a little while and gave the V sign," he added.

Before publishing, Keller sought and received permission from the families of all the departed who are highlighted in the book.

"I wasn't going to include it in the book if they didn't feel that it was a good thing," he said.

The collection includes plenty of Scripture and theology, with a dash of pop culture as well. T.S. Eliot and J.K. Rowling make appearances. Darwin and the Grateful Dead are also included.

The Book of Common Prayer provides solace again and again.

"When I was born, there was nothing said about the person at their death," he said.

The liturgy from the 1928 Book of Common Prayer was considered sufficient for any farewell.

"The assumption was, it didn't make any difference whether it was the King of England, or a pauper outside the palace gates. We're all the same in the eyes of God. Only God really knows the story of this person, so nothing needs to be said," Keller said. "Pastorally, that was not sufficient."

Once the prayer book was revised in 1979, priests were given greater leeway, he said.

During his time as a minister in Pine Bluff, Fort Smith, Van Buren and Little Rock, Keller has witnessed plenty of joyous occasions -- baby baptisms and weddings are part of the life of the church.

The families are often in shock and the pain is sometimes palpable.

Keller tries to keep his own emotions in check as he ministers. It isn't always easy.

"I'm an emotional guy and I've gotten more emotional, not less, as time goes by. I don't want to fall apart in a sermon," he said.

When he stands in the pulpit, he brings a cup of ice with him, he said.

It isn't there to quench his thirst; it's there to help him keep his composure.

"If I'm starting to lose it, if I take that ice and just chew on it, it pauses things. The congregations, they know what I'm doing, and so they'll laugh. It just changes the dynamic and I can go on," he said.

Two of the homilies in the book were delivered by Keller at his parents' funerals.

One of the founders of Murphy Oil and a highly regarded philanthropist, she left behind "motherly instructions" for her own funeral, directing her son to deliver a "Homily, not [a] eulogy," he noted in the book.

His mother wanted a Gospel sermon, not a flowery tribute.

That's what her son delivered, a message that included quotations from theologian Karl Barth and references to the Council of Chalcedon, a gathering of bishops in 451 A.D.

He closed with words from the Ministration at the Time of Death, the Anglican last rites.

Asked which funeral homilies are hardest to deliver, Keller said, "The obvious answer may be the true answer: When somebody's committed suicide."

Again and again in "Getting on Toward Home," Keller returns to the New Testament promises of resurrection.

It's a message that some theologians reject.

In one homily, he quotes Union Seminary President Serene Jones, who isn't convinced that the Gospel accounts can be taken at face value.

"I don't know [what happens when we die]," she told the New York Times' Nicholas Kristof shortly before Easter.

"There may be something, there may be nothing. My faith is not tied to some divine promise about the afterlife," she wrote.

Replied Keller: "My faith is. My faith is tied both to the resurrection of Jesus from the dead, I am speaking literally, and the promise of the afterlife. ... As a pastor, I pray I have always made this clear."

On Good Friday, "God abided with his Son: secretly persisting with him on the cross, when apparently forsaken; descending with him into total darkness; dwelling there, intimate and ready, as love among the ruins," Keller preached.

"On the third day, God Almighty stirred him, his treasure stock of memories and love intact, to life. That Easter Sunday, God unlatched the door into eternity, through which Christ leads us on our way, exultant."

In the interview, Keller recalled ministering to a dying woman.

"She said 'I want to ask you something. Do you believe in heaven?' And I said, 'Why of course I do.'

"She said 'Well, I'm glad to hear you say that because Father So-and-So, going back to the 1950s, in our confirmation class, he said he didn't believe it. That that was just a myth.' She said 'It's been bothering me ever since.'"

The story bothered Keller as well.

"That is pastoral malpractice," he said.

In his view, the Gospel accounts of the life, Crucifixion and resurrection of Jesus are trustworthy.

"I'd be hard pressed to find as good an explanation for why the New Testament is written the way it is that's better than, because Jesus rose from the dead and they knew it."

"The Christian faith is a coherent and comprehensive understanding of the world that does a better job of explaining the world than anything else I know of. My doctorate got me to that. Plus, I've been living in a religion with God in Christ for all those years," he said. "I don't have any trouble believing the Gospel." 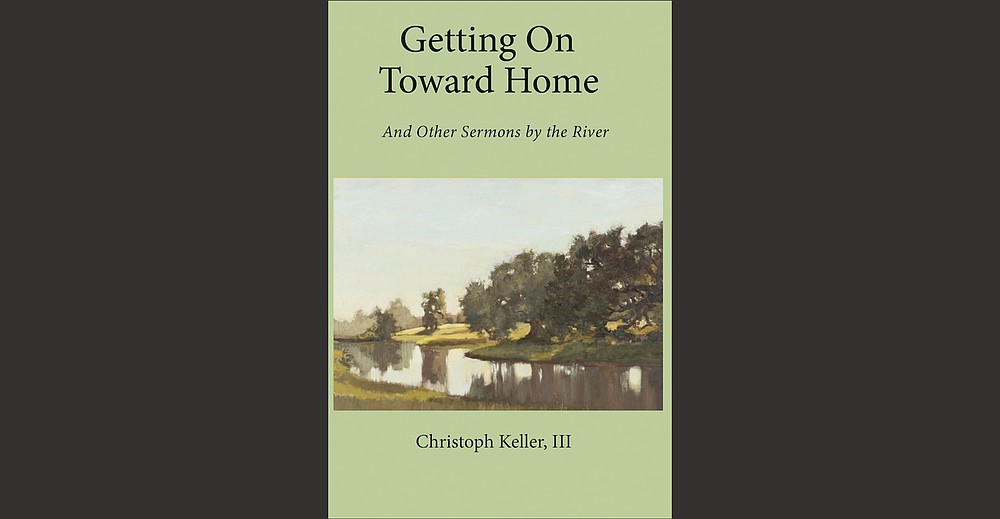 Former Trinity Episcopal Cathedral Dean Christoph Keller III will read from his book, “Getting on Toward Home and Other Sermons by the River” on Tuesday as part of Little Rock’s Six Bridges Book Festival. The book’s cover features a painting, titled “Louisiana Reflections,” by Keller’s sister, Kathryn Keller. (Courtesy photo)