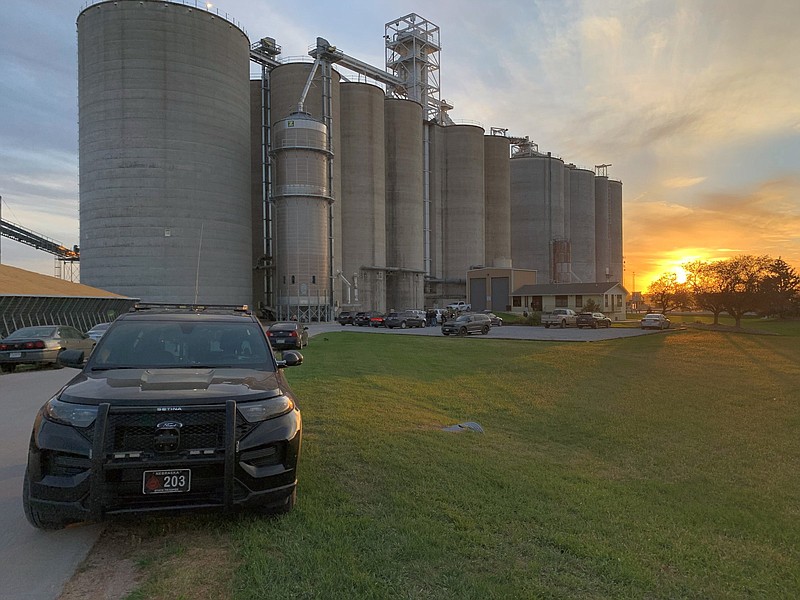 A fired employee opened fire at this Agrex grain elevator Friday, killing one person and injuring two others before he was shot and killed by another employee in Superior, Neb. (AP/Lincoln Journal Star/Andrew Wegley)

The employee, who was not named, got a weapon and shot Max Hoskinson, 61, after Hoskinson began shooting at the Agrex Elevator in Superior, Neb., on Thursday. Hoskinson, of Superior, was pronounced dead at a hospital.

Authorities said Hoskinson had been fired earlier Thursday and returned that afternoon with a gun and began shooting in an office area.

The victims were identified as Sandra Nelson, 60, of Formoso, Kan., and 53-year-old Darin Koepke of Hadar, Neb. The third person shot by Hoskinson was treated at a hospital and released.

Patrol Sgt. Jeff Roby said during the news conference that authorities do not anticipate filing any charges against the employee who shot Hoskinson.

"In fact, it's likely that the employee's actions may have prevented much further loss of life in this tragedy," Roby said.

MINNEAPOLIS -- A Minneapolis police officer has been charged with manslaughter and vehicular homicide after a crash in July that killed an innocent motorist while the officer was pursuing a stolen vehicle, a prosecutor announced Friday.

Officer Brian Cummings was driving nearly 80 mph in Minneapolis with his siren and lights activated when his squad car slammed into another vehicle, killing 40-year-old Leneal Frazier, Hennepin County Attorney Mike Freeman said in a statement. The crash ended a chase that lasted more than 20 blocks, including through residential neighborhoods where the posted speed limit is 25 mph.

"Police are supposed to protect and serve citizens, and to act in a manner consistent with their sworn oath to do so. Officer Cummings' actions deviated from his oath, and his negligence caused the death of Leneal Frazier," Freeman said.

An accident reconstruction report said the fatal collision "can be attributed to the Defendant for failure to operate his vehicle with due regard for the safety of other motorists."

Cummings' attorney, Tom Plunkett, said Cummings was pursuing a suspect in a "violent carjacking" and that the occupants had been "on a crime spree, a practice that has unfortunately become too common in Minneapolis."

Two operations led by the Eastern District of Louisiana New Orleans Task Force ran from Aug. 1 until Sept. 30, according to a news release from the agency. The Louisiana State Police and Department of Child and Family Services, as well as the FBI, three sheriff's offices and three police departments assisted.

Investigations that were part of the Missing Child Unit's operation found allegations of human sex trafficking of minors in several cases.

In addition to the eight children who were recovered, three returned on their own and three more were located elsewhere. A teenage female was found in Phoenix while on her way to see an older man she met online in Las Vegas. Two other minors were found in a rural area of southern Mississippi.

One suspect, who was in violation of his registration in Georgia since at least 2017, was found living in New Orleans and was arrested, accused of failing to register. Another lifetime registration sex offender was also found living in the city who had been wanted on a warrant related to cutting off his electric monitor and fleeing probation in Delaware.

ST. LOUIS -- A former pastor accused of sexually assaulting two women inside a suburban St. Louis Catholic supply store, then killing a third when she refused his sexual demands pleaded guilty Friday to first-degree murder and other charges.

Thomas Bruce's plea came days before jury selection was to begin in a trial scheduled to start Nov. 1 for the attacks in Ballwin, Mo., on Nov. 19, 2018. He was sentenced to a mandatory sentence of life without parole, The St. Louis Post-Dispatch reported.

At Friday's hearing, Bruce appeared to be practicing reading from a piece of paper he had in his hand. But after the victims read their impact statements, Bruce told the judge that he had nothing to say and started to weep, KSDK-TV reported.

Bruce, now 56, was on the run for two days before his arrest, prompting some schools, churches and businesses to close.