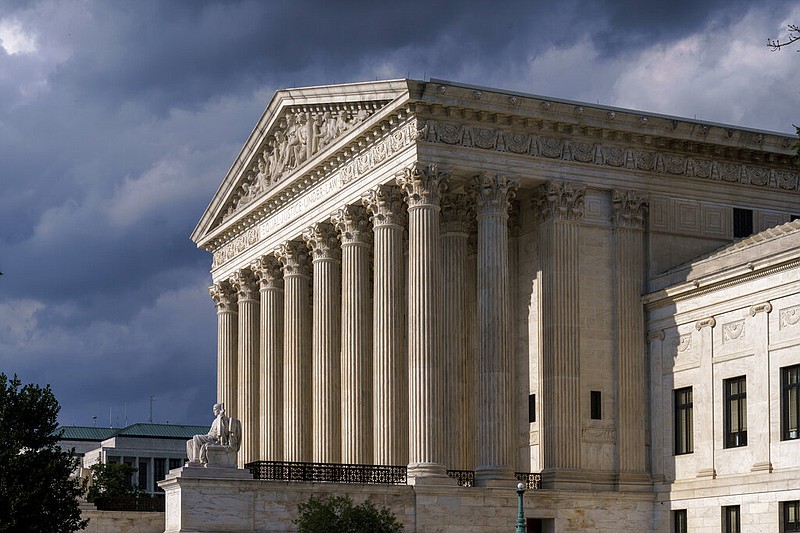 WASHINGTON -- The U.S. Supreme Court is allowing the Texas law that bans most abortions to remain in place, but has agreed to hear arguments in the case in early November.

The justices said Friday that they will decide whether the Justice Department and abortion providers can sue in federal court over a law that Justice Sonia Sotomayor said was "enacted in open disregard of the constitutional rights of women seeking abortion care in Texas."

Answering that question will help determine whether the law should be blocked while legal challenges continue. Arguments are set for Nov. 1.

The court's action leaves in place for the time being a law that clinics say has led to an 80% reduction in abortions in the nation's second-largest state.

The justices said in their order that they were deferring action on a request from the Justice Department to put the law on hold. Sotomayor wrote that she would have blocked the law now.

"The promise of future adjudication offers cold comfort, however, for Texas women seeking abortion care, who are entitled to relief now," Sotomayor wrote.

Sotomayor was the only justice to make her views clear, but there were not five votes on the nine-member court to immediately block the law Friday. It takes just four justices to decide to hear a case.

The court first declined to block the law in September, in response to an emergency filing by the abortion providers. The vote was 5-4, with Chief Justice John Roberts joining Sotomayor and the other two liberal justices in voting to keep the law on hold while the legal fight goes on in lower courts.

[Video not showing up above? Click here to watch » arkansasonline.com/1023sb8/]

Now, though, the justices have decided to weigh in before lower courts definitively decide the issues.

Kimberlyn Schwartz, a spokeswoman for Texas Right to Life, said she was happy the law remains in effect. "This is a great development for the Pro-Life movement because the law will continue to save an estimated 100 babies per day, and because the justices will actually discuss whether these lawsuits are valid in the first place," Schwartz said in a statement.

Amy Hagstrom Miller, chief executive of Whole Woman's Health, said Friday's order means patients will continue to be denied care at her four clinics in Texas, on top of the hundreds who already have been turned away. Providers say the ability of Texas' nearly two dozen clinics to stay open is threatened the longer the law remains in effect, although Hagstrom Miller said she was not aware of any imminent closures.

But she said clinics are trying "to band together and get resources" to keep doors open. In 2013, another restrictive Texas anti-abortion law led to the closing of half the state's 40-plus clinics. The Supreme Court ultimately struck down that law in 2016, but some clinics never reopened.

"It's a matter of time if this law continues to be enforced," Hagstrom Miller said. "It will cause clinics to close and further decimate the fabric of care that is needed to take care of people across the state."

The law has been in effect since September, aside from a district court-ordered pause that lasted just 48 hours. It bans abortions once cardiac activity is detected, usually around six weeks and before some women know they are pregnant.

That's before the Supreme Court's major abortion decisions allow states to prohibit abortion, although the court has agreed to hear an appeal from Mississippi asking it to overrule those decisions, in Roe v. Wade and Planned Parenthood v. Casey.

But the Texas law was written to evade early federal court review by putting enforcement of it in the hands of private citizens rather than state officials.

The focus of the high court arguments will not be on the abortion ban, but whether the Justice Department and the providers can sue and obtain a court order that effectively prevents the law from being enforced, the Supreme Court said in its brief order.

Usually, a lawsuit seeking to block a law because it is unconstitutional would name state officials as defendants. However, the Texas law, which makes no exceptions for pregnancies resulting from incest or rape, bars state officials from enforcing it and instead deputizes private individuals to sue anyone who performs the procedure or "aids and abets" it.

The patient may not be sued, but doctors, staff members at clinics, counselors, people who help pay for the procedure or drive them to it are all potential defendants. Plaintiffs, who do not need to live in Texas, have any connection to the abortion or show any injury from it, are entitled to $10,000 and recovery of their legal fees if they win. Prevailing defendants are not entitled to legal fees.

If the law stays in effect, "no decision of this Court is safe. States need not comply with, or even challenge, precedents with which they disagree. They may simply outlaw the exercise of whatever rights they disfavor," the Biden administration wrote in a brief filed earlier in the day.

Texas Attorney General Ken Paxton, a Republican, said the court should stay out of it for now, and that challenges to the law should move through state courts.

"Federal courts are not 'roving commissions assigned to pass judgment on the validity of the Nation's laws,'" said Paxton's filing, quoting a 1973 Supreme Court decision. "Neither is the Department of Justice."

Other state-enforced bans on abortion before the point at which a fetus can survive outside the womb, around 24 weeks, have been blocked by courts because they conflict with Supreme Court precedents.

"Texas should not obtain a different result simply by pairing its unconstitutional law with an unprecedented enforcement scheme designed to evade the traditional mechanisms for judicial review," the administration wrote.

A day earlier, the state urged the court to leave the law in place, saying the federal government lacked the authority to file its lawsuit challenging the Texas ban.

The Justice Department filed suit over the law after the Supreme Court rejected the earlier effort by abortion providers to put the measure on hold.

In early October, U.S. District Judge Robert Pitman ruled for the administration, putting the law on hold and allowing abortions to resume.

Two days later, a three-judge panel of the 5th U.S. Circuit Court of Appeals put the law back into effect.

The court already is hearing arguments on Dec. 1 in the Mississippi case in which that state is calling for the court to overrule the Roe and Casey decisions.

Information for this article was contributed by Mark Sherman and Paul Weber of The Associated Press; by Robert Barnes of The Washington Post; and by Adam Liptak of The New York Times.