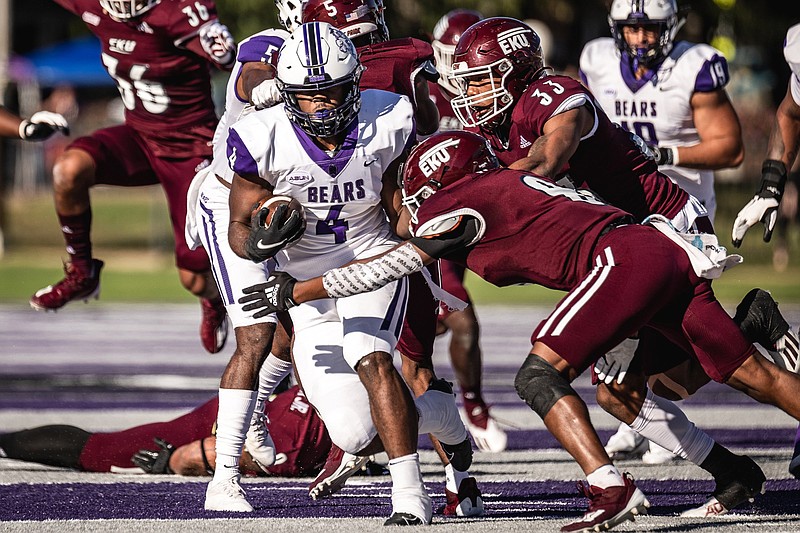 Although the University of Central Arkansas announced plans in late January to move from its longtime Division I home of the Southland Conference to the Atlantic Sun Conference this fall, the first football season of ASUN play is one that's been quite familiar for the Bears -- in large part because of a slew of recent opponents.

Less than a month after the Bears joined the conference, the ASUN announced a football scheduling partnership with the Western Athletic Conference for this season.

Formally deemed the ASUN-WAC Challenge, the agreement partnered three ASUN institutions (Central Arkansas, Jacksonville State and Eastern Kentucky) with four WAC schools (Sam Houston, Abilene Christian, Stephen F. Austin and Lamar) in a scheduling agreement that would give the school with the best mark of the seven an automatic bid to the FCS playoffs. The short-lived union of these squads, which is being referred to as the AQ7, marks the start of the transition period for UCA football.

"You don't feel like you're 2 feet in the ASUN yet," UCA Coach Nathan Brown said. "It's like we're dipping our toe in the water."

While it may not feel like the Bears have been able to dive head first into ASUN football this season, AQ7 play has had some advantages for UCA, largely with familiar opponents and road trips. Seven of the Bears' 11 opponents this season are ones they've played in the past two seasons, and four of their six road games are trips they've made in that timeframe as well.

Both the ASUN and WAC are taking initial steps to have their own football leagues, with this season's agreement a big first step.

After adding Austin Peay in mid-September, the ASUN is set to begin its own conference play next season, with the Governors, UCA, Jacksonville State, Eastern Kentucky, Kennesaw State and North Alabama giving the conference its six necessary schools for an automatic playoff bid. Kennesaw State and North Alabama aren't participating in the AQ7 due to buyout penalties each would have faced for leaving the Big South Conference ahead of 2022.

For the Bears, a move to the ASUN from the Southland was largely spurred by the conference's aspirations to establish a football presence, UCA Athletic Director Brad Teague said.

This came to Teague's attention after conference commissioner Ted Gumbart put out a video in January 2020 expressing the conference's desire to expand the conference to 18 schools, with eight of those members playing football. In the video, Gumbart said the plan would be to sponsor those eight schools as their own separate conference, which he titled, "The United Athletic Conference." Teague also said Eastern Kentucky Athletic Director Matt Roan put "impetus" into the conference finding football schools, with its first three being UCA, the Colonels and Jacksonville State.

"Really the past year and a half, two years, it's been crazy," Teague said. "But to be able to go through this trial tribulation of covid and dealing with that, to be building towards something new and exciting has helped it a lot."

Teague said the conference's desire is to still get to eight football-playing members, and he believes it's a goal the ASUN can reach by 2023.

"That's our optimal number," Teague said. "And so, they need to be in our geographic footprint, [and] they need to be really good football programs. You could probably get on a map and figure out who the candidates would be."

NOTEWORTHY Following a record-setting performance in the Bears’ loss to Eastern Kentucky last week, receiver Tyler Hudson leads the FCS in receiving yards with 796 yards. … Following the Eastern Kentucky game, quarterback Breylin Smith hasn’t thrown an interception in two games, tying his longest streak of games without an interception since the first two games of the 2019 season. … UCA had 10 penalties called against it in its loss to Eastern Kentucky, which marked the first time it’d been called for 10-plus penalties since playing Stephen F. Austin in October 2017.