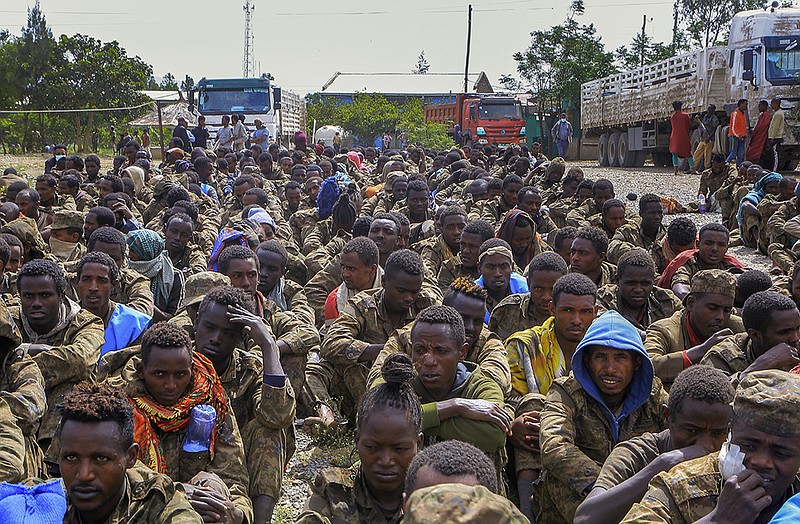 Captured Ethiopian soldiers and allied militia members sit in rows after being paraded by Tigray forces through the streets in open trucks on their way to a detention center Friday in Mekele, in northern Ethiopia. Ethiopian military airstrikes Friday forced a United Nations humanitarian flight to abandon its landing in Mekele amid the world’s worst hunger crisis in a decade. More photos at arkansasonline.com/1023tigray/. (AP)

NAIROBI, Kenya -- Ethiopian military airstrikes on Friday forced a United Nations humanitarian flight to abandon its landing in the capital of the country's Tigray region, and a government spokesman said authorities were aware of the inbound flight.

Further U.N. flights have been suspended to Mekele, the base of humanitarian operations in Tigray, the World Food Program said. It said the flight with 11 passengers had been cleared by federal authorities but "received instructions to abort landing by the Mekele airport control tower." It safely returned to Addis Ababa.

The friction between the government and humanitarian groups is occurring amid the world's worst hunger crisis in a decade, with close to a half-million people in Tigray said to be facing famine-like conditions. The government since June has imposed what the U.N. calls a "de facto humanitarian blockade" on the region of some 6 million people, and The Associated Press has reported that people have begun to starve to death.

Ethiopian government spokesman Legesse Tulu said authorities were aware the U.N. flight was in the area but said the U.N. and military flights had a "different time and direction." It wasn't immediately clear how close the planes came to each other.

Tigray forces spokesman Getachew Reda in a tweet said "our air defense units knew the U.N. plane was scheduled to land and it was due in large measure to their restraint it was not caught in a crossfire." He suggested that Ethiopian authorities were "setting up the U.N. plane to be hit by our guns."

Ethiopia's government in recent months has accused some humanitarian groups of supporting the Tigray forces, and last month it took the extraordinary step of expelling seven U.N. officials while accusing them of falsely inflating the scale of the Tigray crisis. Authorities have subjected aid workers on U.N. flights to intrusive searches and removed medical cargo.

Now the airstrikes that began this week in Mekele have halted aid deliveries, humanitarian spokeswoman Gemma Connell told reporters, saying "not a single truck" has entered Tigray since Monday.

Thousands of people have been killed since November, when a political falling-out between the Tigray forces who long dominated the national government and the current administration of Prime Minister Abiy Ahmed flared up in fighting.

Tigray forces in recent months have retaken the Tigray region and brought the fighting into the neighboring Amhara and Afar regions. The U.N. says more than 2 million people are now displaced overall.

And yet "our operations will come to a grinding halt in the not so distant future" in Tigray if current conditions continue, Connell said.

The airstrikes in Mekele were the first in several months, killing three children and injuring more than a dozen people, despite repeated international calls for a cease-fire and the threat of further sanctions.

On Thursday, the government claimed a successful strike against another military base used by the Tigray forces near Mekele, but the Tigray forces spokesman asserted that air defenses prevented the plane from hitting targets.

An airstrike Wednesday hit an industrial compound that the government said was used by the Tigray forces to repair weapons. A Tigray spokesman denied that and said it was used to produce cars and tractors. Two other airstrikes hit the city Monday.

Tigray remains under a communications blackout, making it difficult to verify claims, while areas of fighting in Amhara are largely unreachable as well.

The airstrikes come amid reports of renewed heavy fighting in Amhara. On Wednesday, the Tigray forces spokesman claimed advances had put the government-held towns of Dessie and Kombolcha "within artillery range," prompting alarm.

Dessie hosts a large number of displaced people who have fled fighting farther north. One resident said he has seen many cars leaving the town with mattresses, cooking equipment and other household items strapped to their roofs in the past few days, but many displaced people are stuck because they can't afford to leave. 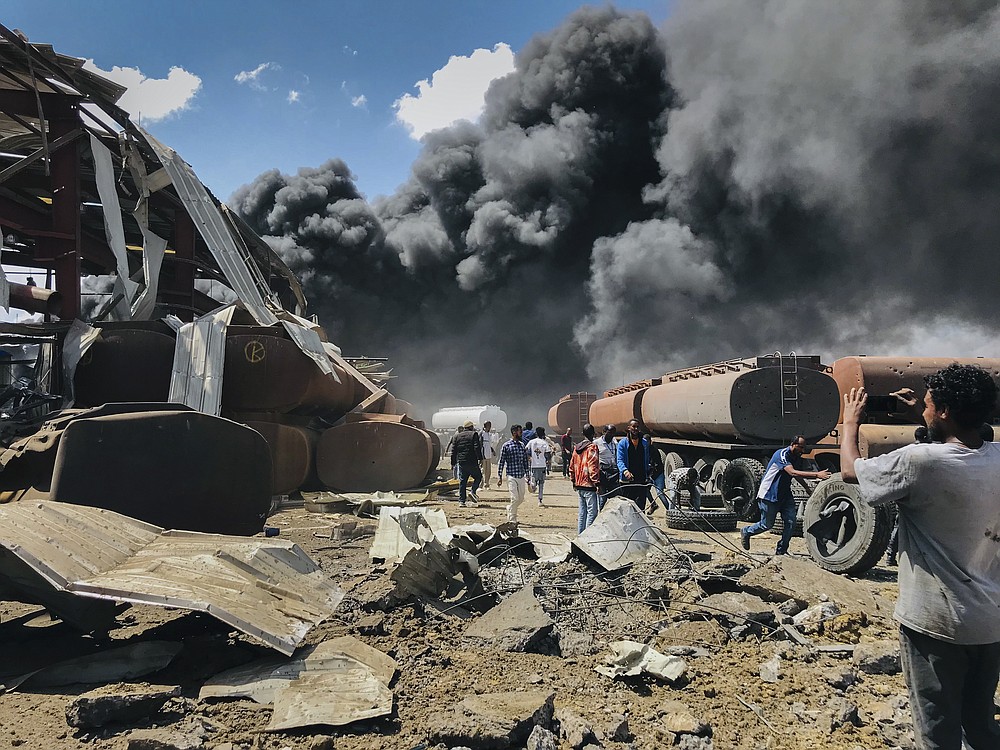 FILE - In this Wednesday, Oct. 20, 2021 file photo, smoke from fires billows at the scene of an airstrike in Mekele, the capital of the Tigray region of northern Ethiopia Wednesday, Oct. 20, 2021. Aid workers say Ethiopian military airstrikes have forced a United Nations humanitarian flight to abandon its landing in the capital of the country&#x2019;s Tigray region. A government spokesman confirms that authorities had been aware of the inbound flight. The development appears to be a sharp escalation in the intimidation tactics that authorities have used against aid workers amid the intensifying, year-long Tigray war. (AP Photo, File)