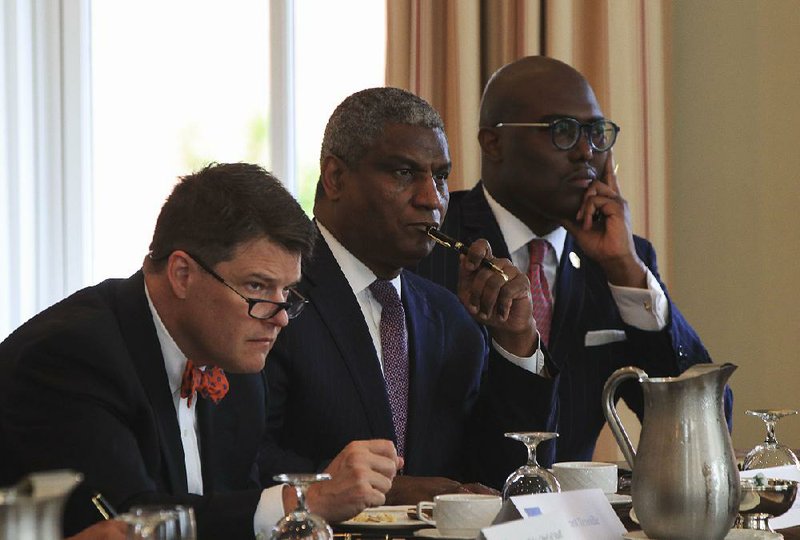 Northwest Arkansas leads the state in accepting diversity, and Democrats must follow that lead to rebuild, the party's new chairman said.

"Northwest Arkansas has done a better job including its Latinx and Marshallese populations than a lot of the rest of us have done in accepting diversity, although we're doing better now," Arkansas Democratic Party Chairman Grant Tennille said in an interview Thursday.

He saw business and community leaders in the northwest region commit to sharing power with minorities and fully accepting them as members of the community when he worked for Gov. Mike Beebe, Tennille said. Beebe was the state's most recent Democratic governor and the last to preside over a majority Democratic Legislature.

Businesses and charitable foundations headquartered in Northwest Arkansas encourage residents to take a pro-diversity pledge to address systemic racism, news accounts show. The nonprofit Walton Family Foundation and the Northwest Arkansas Council, a regional group of community and business leaders, joined a "friend of the court" legal brief earlier this year along with others to get a state law they view as discriminatory overturned. Similar efforts go back years.

The Walton Family Foundation and the Walmart Foundation last week announced a $2.2 million grant to the University of Arkansas Foundation in Fayetteville to provide training and technical assistance to 100 nonprofit organizations to increase their diversity efforts, according to an announcement Thursday.

"The effort there has been more focused," Tennille said. "Northwest Arkansas points the way for the rest of us."

Democrats need that kind of unity, Tennille said. The goal is not only to increase minority votes, he said, but to have everyone in Arkansas' communities realize how much their interests are shared, he said.

For instance, the Republican-majority Legislature just approved new congressional district boundaries that split Pulaski County three ways, between the 1st, 2nd and 4th Districts. The portion removed from the 2nd District and then split between the 1st and the 4th is predominantly Black, figures show.

The split affects everyone in Pulaski County, Tennille said. It gives the Democrats an opening to run against state legislators from Pulaski County who voted for the split -- but it never should have happened, he said.

"We have to be seen as the ones fighting things like this," he said.

In another issue, Gov. Asa Hutchinson is expected to call a special legislative session later this fall to pass a state income tax package. The state is going to cut taxes while roads, wastewater treatment systems and other infrastructure across the state are in need of repair, Tennille said.

This tax cut would be a mistake that unified Democrats should be able to capitalize on -- but shouldn't be happening, Tennille said.

"We have to break that super-majority," the three-quarters majority in each legislative chamber that allows Republicans to pass state budgets without Democratic votes, he said.

Rep. David Ray, R-Maumelle, is a Republican, a Pulaski County lawmaker who voted for the new congressional map and a vocal supporter of an income tax cut. He is also an experienced statewide campaign manager.

"I think it's beyond wishful thinking. It's ludicrous," Ray said of running against Pulaski County lawmakers who voted for the district maps. "Those are fair, accurate maps" that equally divide the state population between the four districts.

"The truth is that Pulaski County will now have three representatives in Congress," Ray said. "If some issue comes up with the Little Rock River Port or the Little Rock Air Force Base, we'll have three members of the House to go to."

The northwest region didn't have much diversity to integrate until the 21st century, Tennille said. The region benefited greatly from national shifting of attitudes on ethnicity and race before Hispanic and Marshallese people arrived there in large numbers, he said.

Irvin Camacho of Springdale is an immigrants' rights advocate.

"It's true there are compassionate and generous people who have helped the immigrant community, but we had to speak up," Camacho said. "We put our concerns out there."

"Self-interest has a lot to do with it, too," he said. This shows in how the largest groups with the most economic impact -- Hispanics and Marshall Islanders -- benefit more from the region's diversity efforts than Blacks living here, he said.

"I've seen it in the arts community," Camacho said. "Black artists don't get the same resources, and they're just as talented. I also saw it in the Black Lives Matter movement. There was more tension about that and all they want is safety."

Alice Gachuzo-Colin is a Black resident of Springdale who moved there with her family in 1994, where she became one of two Black graduates in a Springdale High School senior class of about 600. She is chief organizer of the city's Martin Luther King Jr. Day parade, starting the first one there in 2018.

"Northwest Arkansas has made tremendous strides," she said Friday. "I love Northwest Arkansas. But the benefits of these diversity efforts passed over us. We're wondering what we have to do. I'm glad the immigrants and Marshallese benefit, but we're fellow Americans. Where's the love, respect and guidance for us?"

Northwest Arkansas may enjoy a reputation for welcoming diversity now, but as late as the 1970s cities in the region were known to be dangerous for Blacks to remain after sundown, she said.

The divide between Black and white Arkansans has deep historical roots that are harder to overcome than those with Northwest Arkansas' immigrant population, said Sen. Joyce Elliott, D-Little Rock, chairwoman of the Arkansas Legislative Black Caucus.

"Yes, there is an historic advantage" in Northwest Arkansas, Elliott said. "You couldn't grow cotton or rice."

Those plantation crops brought slave labor and the related social attitudes and race-based economic hierarchy to much of the rest of Arkansas, she said.

More Marshall Islanders live in Northwest Arkansas than in any other state besides Hawaii, U.S. Census figures show. That population is about to get much bigger, Tenille said.

Sea levels in the former U.S. territory in the Pacific are rising, geologists say, but the timeline for total submersion is longer than Tennille's estimate. A November study by University of Hawaii geologists says the earliest the islands could disappear is 2080. Of course, the habitable land remaining shrinks each year, the study finds.

The estimated population of the Republic of the Marshall Islands is about 60,000 people. Marshallese citizens are allowed to travel to the United States and live here legally under an agreement.

"It's already happening," said Melisa Laelan, chief executive officer of the Springdale-based Arkansas Coalition of Marshallese, of increased immigration to Arkansas from the islands. "Our office is getting three times as many requests for assistance as it usually gets."

There is a regional rift between Northwest Arkansas and the rest of the state's Democrats and the party's strained finances make the tension worse, Tennille said.

Northwest Arkansas has always had a large, active population of Democrats, even when the region was the then-minority Republican Party stronghold. Those Northwest Democrats have long believed the party never invested the resources needed to flip the region, he said. Meanwhile, the rest of the party believes the thriving economy of the northwest region should provide its own resources if not give more to other parts of the state.

"The heart, soul and guts of the party are rural Black voters," Tennille said. "That will not change. The lesson to be learned is that we need each other. There are passionate Democrats in Northwest Arkansas with some real juice and enthusiasm. We need that."

More than enthusiasm, the party needs money. Tennille met by video with the Washington County Democratic Party on Monday night. By the day after that meeting, the county party raised $5,285 for the state party's use. The party needs more, Tenille said.

"Rat out your rich friends," he told the county meeting Monday. "Send me their names and phone numbers."

"Nobody wants to send money to pay bills," Tenille said at the Monday meeting. "They want to help candidates, but we aren't healthy enough to have that option."

He used to joke that, if all the Federal Election Commission rules on party finance were stacked, they'd come up to his waist, Tennille said in his Thursday interview.

"Now, they're over my head. And the people we owe money to are the lawyers, accountants and software manufacturers we need to comply with those rules."

The problem was a sharp drop in donations as the party's political fortunes fell, Tennille said. What was hoped to be a temporary drop turned out to be lasting, he said.

Elliott agreed with Tennille that regional rifts exist and need healing. But when much of Arkansas thinks of the northwest region, they think of one local Walmart Store that closed downtown storefronts of hometown businesses, she said. Walmart Stores Inc. headquarters are in Bentonville.

"There are lessons to be learned, but one of those lessons is that the resources gathered from all around Arkansas need to be shared in more than one region," she said. "The bottom line is that we all need each other."