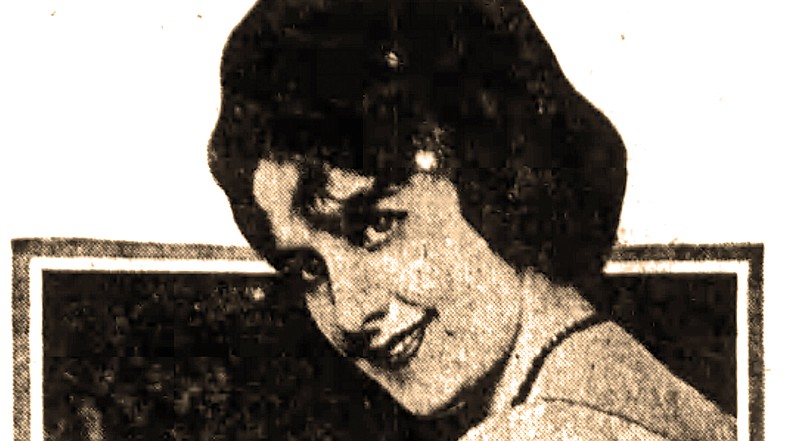 The Nov. 13, 1921, Arkansas Democrat published this photo of Edith Mae Patterson of Pine Bluff, the most beautiful woman in the nation. (Democrat-Gazette archives)

Look up the history of beauty pageants and you won't find Edith Mae Patterson listed as the very first Miss America. But according to a St. Louis newspaper and thousands of her admirers in 1920s and early '30s Arkansas, that she was.

At first, in October 1921, the 19-year-old schoolteacher from Pine Bluff was merely a finalist in a photo contest. The St. Louis Globe-Democrat was determined to find the most beautiful woman in America. (Nine newspapers did something like this in 1921, according to a history posted on the website of the Miss America Pageant.) The Globe-Democrat was one of two big daily newspapers then serving St. Louis and had subscribers all over the place, including in Arkansas.

Her aunt knew these measurements from sewing her niece's clothes.

On Oct. 6, 1921, based upon that photograph, three artist/judges declared Patterson the "U.S. District" winner — that is, the most photogenic woman in 46 states. Missouri and Illinois were not included in this U.S. District. Each of them and the city of St. Louis was a distinct district, and each had its own most photogenic finalist.

The newspaper then summoned the finalists to St. Louis, to meet the judges.

Her prizes included $1,000 and a week in St. Louis (and $1,000 then had roughly the buying power of $15,300 today). Besides being judged, she met a theater manager named William Goldman and B.J. Derby of Paramount Pictures Corp. The Arkansas Gazette reported:

"Miss Patterson's public activities will be filmed from the time she reaches St. Louis until she leaves. This film will be shown in the local theater and later shown in the Paramount Weekly."

In other words, she was going to star in a newsreel.

This news had no sooner hit the fans than S.W. Benton, president of the Pine Bluff Advertising Club, arranged a public reception at the Hotel Pines. Hostesses included Patterson's fellow members of The Pollyanna Club, a social club of women who believed in having good attitudes and being nice.

She was only a first-year teacher, but Lakeside school administrators excused her from her fourth-grade classes at Pine Bluff so she could travel to St. Louis. The Hotel Pines hosted a bon voyage dinner for 50 of her relatives. Three hundred friends and a band saw her off at Union Station in Little Rock.

She said the judges interviewed the district winners individually.

She wore ordinary clothes, and swimsuits were not involved. Possibly it helped Patterson that she was a 1918 graduate of Pine Bluff High School who had under her belt a year of college at Rice Institute at Houston. But:

"They just made us stand on a chair, turn around, walk and talk."

She was well received in the big city. Goldman held receptions in her honor at his 4,000-seat theater, and a Globe-Democrat reporter, Fred H. Brennan, produced a long essay analyzing her beauty from an "artistic" standpoint.

"Before placing Miss Patterson on a figurative pedestal," he wrote, "it is only fair to state that the pictures so far published in connection with the contest did not do her justice. By some queer perversity of lights and shadows, the camera added at least 20 pounds to her weight. Her face, which appeared in a too-round oval, is in reality, very refined and almost aesthetic in its lineaments. This fact was noted at once by the judges when they called her before them for the concluding test. The arrangement of her hair also was unfortunate as the lightness of contours was lost in the reproduction. The profile cut [photo] was especially bad."

She "leaves one with the distinct impression of her poise," he added. "She is Junoesque. Her carriage, without being too athletic and muscular, gives the suggestion of dignity."

Also, she did not slouch or walk about needlessly. And he liked her personality, which was friendly. She was "a girl you'd like to know," he said.

The clothiers who handled the wardrobe that came with her prize declared her "a perfect size 18." None of her gowns or frocks had to be altered.

Parties large and small greeted her return to Pine Bluff.

On Nov. 4, she was one of the advertised attractions for a motorcade to Judsonia and the opening of a hydroelectric dam. As the Democrat reported, she christened the Arkansas Hydro-Electric Development Company's Dam No. 1 after speeches by dignitaries. She hit the dam with a bottle of Hot Springs water "while suspended several hundred feet above the river in the tram-car on the aerial cableway between the cliffs on either side of the stream."

The Globe-Democrat pronounced Patterson its overall winner Nov. 6: the most beautiful woman in America. She didn't know about that until she picked up a copy of the St. Louis paper at the Hotel Marion in Little Rock, where she was making yet another appearance.

Movie cameras captured the scene Nov. 7 when Pine Bluff celebrated the glory she had brought to all Arkansas. A band played "Oh, You Beautiful Doll," and 2,000 Cotton Belt employees turned out to cheer (her father, Arch Patterson, was foreman of the railroad shop's mechanical department).

The Nov. 13 Democrat reported that a delegation from the Monticello Chamber of Commerce showed up at Lakeside school in Pine Bluff, hoping she would oversee the spudding-in of an oil well. She would pull the lever, sending the rotary drill into the earth. The report said:

"All interested in the project believe that an Arkansas girl, and the nation's prize-winning beauty at that, will bring good luck to an Arkansas oil well, and there has been a choice block of 40 acres set aside for Miss Patterson which will be given to her as part of the ceremony planned in connection with the spudding-in of the well."

At first she begged off because she already had too many appearances booked that week, but then changed her mind and accepted the invitation to visit Monticello and pull that lever.

Like a modern Miss America, she had evening gowns, fur coats and jewelry and was sent on a whirlwind tour of points north and east to advertise products.

And the appearances — in person, on radio, in newsreels — had only just begun. Even among those documented in Arkansas newspapers there were far too many for me to go on typing about them today (and not only because I just got my booster dose of anti-covid vaccine and my arm hurts). So, let us draw a line here and come back to this story another day.

What is that you said, Friend Reader? You're wondering why the name Edith Mae Patterson is not familiar? And where is her entry in the Encyclopedia of Arkansas?

Would it ring some bells were I to tell you that she got married, and her last name became Pennington?

In fact, we are talking about the Rev. Edith Mae Pennington, the national beauty queen who cast off her furs and makeup to become an itinerant evangelist for Jesus.