Hogs get boost by specialists 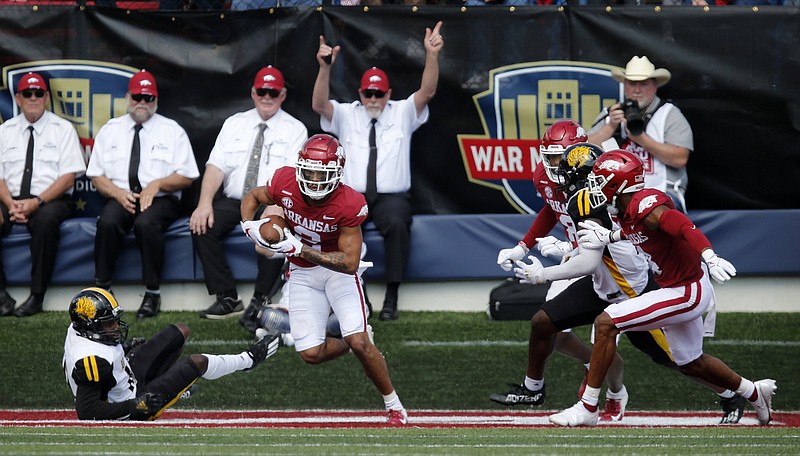 Arkansas defensive back Myles Slusher (2) intercepts a pass in the end zone during the second quarter of the Razorbacks’ 45-3 victory on Saturday at War Memorial Stadium in Little Rock. It was Slusher’s first collegiate interception. (Arkansas Democrat-Gazette/Thomas Metthe)

The University of Arkansas had one of its best special teams games in several years during Saturday's 45-3 win over Arkansas-Pine Bluff at War Memorial Stadium in Little Rock.

Additionally, kickoff man Vito Calvaruso had eight touchbacks on eight attempts, punter Reid Bauer averaged 47.3 yards on three kicks and Cam Little made his only field goal try, a 31-yarder in the second quarter, and went 6 for 6 on PATs.

Calvaruso improved his touchback percentage to 86.3%.

Multiple Razorbacks had big blocks on the big scoring return, on which Parodi made the catch on the 20, started left near the UAPB sideline, then cut back across the field and got to the Razorback sideline at the UAPB 12 to finish the play.

LaDarrius Bishop had a good block at the start of the return and Jashaud Stewart had the most critical one. Stewart showed good lateral movement by reversing field on the Arkansas 36, sprinting ahead of Parodi and pulling off a pancake block on Torrence Bardell after a lengthy engagement around the Hogs' 40.

Defensive back Nick Turner did a good job late in the return by screening off a defender and not drawing a block in the back call on the punter Josh Sanchez, whose desperation leap managed to swipe the back of Parodi's cleat at about the 6 before he scampered into the end zone.

Parodi had 3 returns for 114 yards and even had a 33-yard return wiped out by a penalty.

Coach Sam Pittman said special teams coordinator Scott Fountain noticed a differential between hang time and distance on UAPB punts that might give Arkansas a shot at returns for one of the first times this season.

Quarterback KJ Jefferson's strong pass efficiency numbers were exemplified by Saturday's effort. The sophomore's best splits came on deep passes of 15-plus yards, on which he went 4 of 6 for 112 yards with at least one drop.

Jefferson delivered deep ball touchdowns covering 18 yards to Blake Kern, 29 yards to Ketron Jackson Jr. and 39 yards to Treylon Burks. He also had a 26-yard strike to De'Vion Warren in the second quarter. His 18-yard touchdown pass to Burks went in the books as a mid-range throw because Burks covered the last few yards before diving across the goal line while alertly keeping his knee off the turf.

Safeties Myles Slusher and Malik Chavis each notched their first career college interception against the Golden Lions and each had questionable returns after their picks.

Slusher put the brakes on a UAPB scoring opportunity in the second half when the Golden Lions flooded the zone in the left side of the end zone on a snap from the 3-yard line. Quarterback Skyler Perry rolled to his left looking for an open man while under pressure from linebacker Grant Morgan and delivered a throw on which Slusher had inside position on Dae'eion Dawkins.

Slusher unwisely brought the ball out of the end zone with Golden Lions all around and was nearly tackled on the 2-yard line before going down at the 11. Razorbacks' corner Montaric Brown was penalized for a personal foul and the Hogs were forced to start on their own 5.

Chavis picked off a deep throw by Xzavier Vaughn at the Arkansas 8 early in the third quarter and appeared to return it 79 yards to the Golden Lions' 13-yard line. However, Dawkins swiped Chavis' legs just after the interception and the safety's knee touched briefly as he maintained his balance and built up a head of steam.

Chavis told Pittman his knee had probably touched on the Arkansas 13-yard line and replay confirmed it had, resulting in a 74-yard differential in field position.

"Those are two guys that are going to be studs for the University of Arkansas that came to play today," Pool said. "I loved seeing Slush get his pick. Same thing with Malik. Love seeing guys like that be successful because they work so hard."

Pittman said Slusher was a bundle of nerves before making his first start of the season last week in place of Jalen Catalon against Auburn, and that the young defensive backs settled in on Saturday.

"I think the more game time they get, the better they're going to be," Pittman said. "I was so happy Chavis got his interception."

Wide receiver Ketron Jackson Jr. has earned plenty of playing time as a true freshman, based on his speed, skills and physicality as a blocker, and he got a reward on Saturday.

Jackson had two catches for 15 yards prior to the game, and he nearly doubled that on one play late in the second quarter.

Jackson ran a post route on first down from the UAPB 29 and got a step on cornerback Nathan Seward. KJ Jefferson had a completely clean pocket to work with and dropped in a spiral to Jackson just at the goal line for his first touchdown as a Razorback.

"Jackson with just too much speed gets some separation and KJ was able to lay it up there," SEC Network announcer Deuce McAllister said.

"I was excited for Ketron," Jefferson said. "He came wide open. I didn't expect him to come that wide open. I was just trying to give him an easy ball he could catch. Ketron had an extremely good week. He was well prepared, got some reps in with the ones. ... That touchdown put his confidence through the roof."

Treylon Burks has been one of the most gracious Razorbacks in recent memory with his general reluctance to tout himself and his strong emphasis in uplifting others.

He took a jet sweep handoff around right end to open Arkansas' second possession and displayed his sprinter's speed in hitting the sideline and streaking 49 yards for a touchdown.

But he knew exactly who got to work to help spring him.

"The O-line blocked," Burks said. "There were really good blocks on the outside from [wideout] Warren Thompson and [tight end] Hudson Henry. They gave me a lane, and I just hit it."

Coach Sam Pittman said the injuries on Saturday were minimal with the Razorbacks heading into a much-needed open date.

Defensive tackle John Ridgeway, who has been dealing with a sore knee, had his playing time shortened due to that issue.

Reserve safety Zach Zimos, who was wearing jersey No. 32 rather than No. 20, appeared to suffer a lower leg/ankle injury in the second half and had to come out of the game.

Senior wideout De'Vion Warren had his best game of the season against the Golden Lions with three receptions for 51 yards.

Warren had back-to-back catches of 13 and 12 yards then added a 5-yard run on a first-quarter drive that ended on Cam Little's 31-yard field goal.

On a three-play touchdown drive in the second quarter, all on explosive plays, Warren provided the second big play, a 26-yard catch from KJ Jefferson to the UAPB 29. Ketron Jackson Jr. caught a touchdown pass on the ensuing play for a 38-0 lead.

Quarterback KJ Jefferson had encouraging words for wideout Warren Thompson, who had a couple of drops on Saturday,

"I feel like we did everything right," Jefferson said of the first near-touchdown to Thompson. "It just didn't bounce our way at that moment. I told him, 'Hey I'm not going to lose confidence in you. Just keep playing ball. Another opportunity will come, just keep playing ball. Try to keep a level head and don't get down on yourself.'"

Arkansas Coach Sam Pittman wasn't positive on how much stock to put into the Razorbacks' 3-0 deficit in the second half, as well as a 91-78 deficit in total yardage.

"Here's what I'll say," Pittman said when asked what he made of the second half. "When a kid sees himself on tape and all this 'Well, I'm as good as somebody and I should be doing this.'

The junior from Warren showed out before heading home for a couple of days. Burks racked up 145 total yards -- 89 receiving and 56 rushing -- and scored on half of his six touches, on catches of 18 and 39 yards and a run of 49 yards.

The Little Rock native had one of his best games in front of a large crowd of family and friends. Williams posted 5 tackles, second-highest total on the team behind Bumper Pool's 8, including a 7-yard sack and had 1.5 tackles for loss. 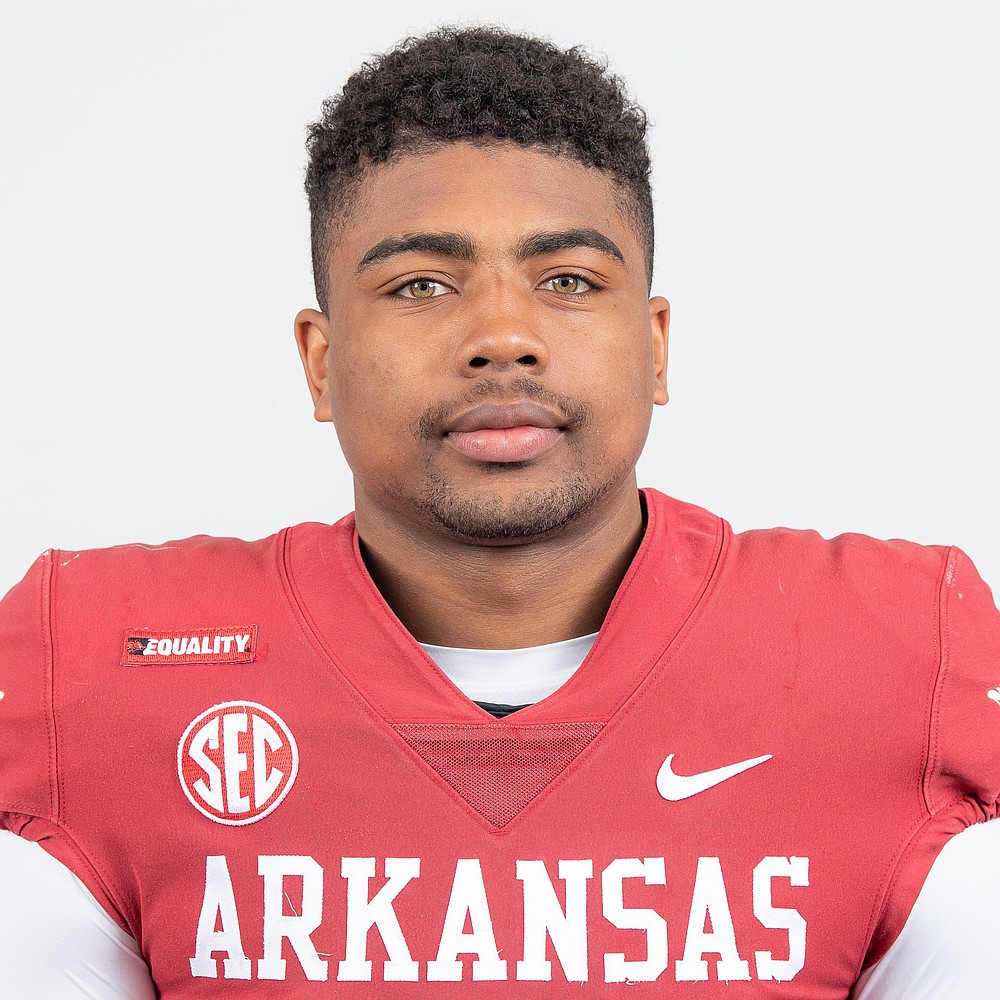 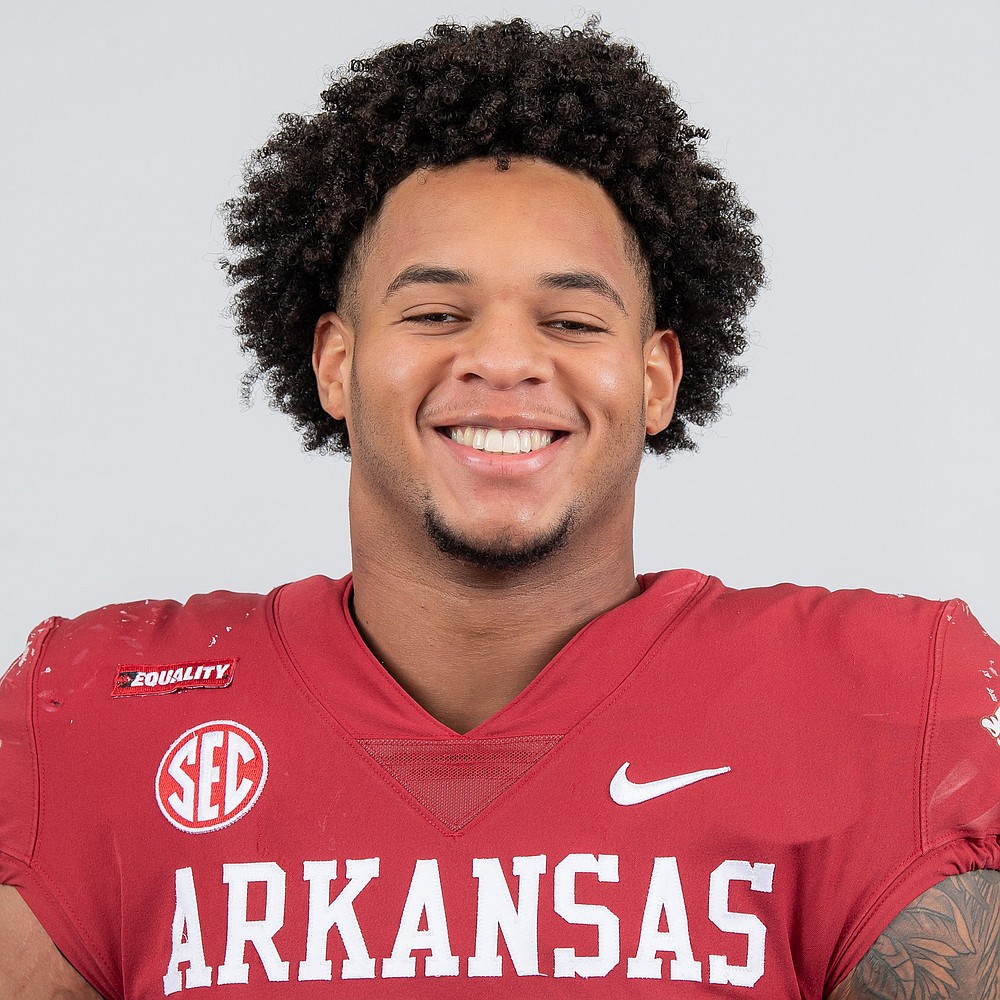