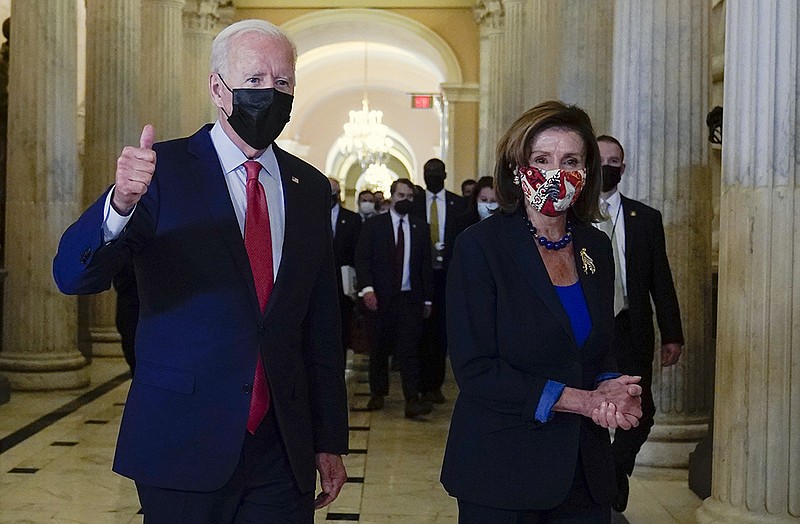 President Joe Biden gives a thumbs up as he walks with House Speaker Nancy Pelosi of Calif., on Capitol Hill in Washington, Friday, Oct. 1, 2021, after attending a meeting with the House Democratic caucus to try to resolve an impasse around the bipartisan infrastructure bill. (AP Photo/Susan Walsh)

House Speaker Nancy Pelosi, D-Calif., said Democrats are on the verge of an agreement on a social spending bill and also plan to vote on a separate $1.2 trillion bipartisan infrastructure bill this week.

"I think we're pretty much there now," Pelosi told CNN's "State of the Union" host Jake Tapper on Sunday when asked whether President Joe Biden would "have a deal in hand" on his Build Back Better agenda before he travels to Europe later this week. "We're almost there. It's just the language of it."

Pelosi estimated 90% of the bill had been agreed upon and written, but didn't specify a final spending number. The social spending bill -- which has proposed investments in child care, home health care, paid family leave and to address climate change -- had started out as a $3.5 trillion package, but faced opposition from Sens. Joe Manchin III, D-W.Va., and Kyrsten Sinema, D-Ariz.

"It is less than was projected to begin with, but it's still bigger than anything we've ever done in terms of addressing the needs of America's working families," Pelosi said.

The White House and other party leaders have spent recent weeks in intense negotiations with the party's holdouts about how to scale back the bill enough to win their support. Pelosi's assurances Sunday came as Biden, at home in Delaware this weekend, was hosting Manchin and Senate Majority Leader Charles Schumer, D-N.Y., to continue discussions on the spending package.

[Video not showing up above? Click here to watch » arkansasonline.com/1025pelosicnn/]

The White House noted the breakfast meeting was a "productive discussion" about the president's agenda. The talks appeared to last for hours, but no decisions were announced. The Democrats "continued to make progress," its post-meeting statement read.

Meanwhile, progressive Democrats have maintained they will not pass the bipartisan infrastructure bill without a concurrent agreement on the social spending bill. But on "Fox News Sunday," Rep. Ro Khanna, D-Calif., a member of the House progressive caucus, said it was "likely" that both deals could be passed this week before Biden attends the U.N. Climate Change Conference in Glasgow, Scotland.

"The president looked us in the eye and he said, 'I need this before I go represent the United States in Glasgow,'" Khanna said. "Many members understand that. We're working very hard to get a deal. I understand we're close, and I'm confident we're going to get there."

Pelosi said that the bipartisan infrastructure plan must be passed by Sunday, when an extension for transportation funding programs expires. That funding has already expired once, which resulted in a brief furlough of 3,700 Transportation Department employees. Pelosi also avoided answering whether she was frustrated by Manchin's and Sinema's resistance to the bill.

"I'm respectful of everybody's point of view," she said Sunday.

In a televised town hall Thursday, Biden said Sinema was "very supportive" of his agenda but refused to raise taxes on corporations or wealthy Americans, "and so that's where it sort of breaks down."

Pelosi on Sunday said "we probably will have a wealth tax" but that it would cover only about 10% of what they needed to pay for the bill. She expressed confidence, however, that the entire social spending bill would be paid for, including through IRS tax enforcement and global taxes.

Khanna, who had originally backed Biden's broader tax increase for corporations and the wealthy, expressed support Sunday for a billionaire's tax as a means of paying for the bill.

"The billionaire's tax is essentially a wealth tax," he said, noting that such a tax was at the core of the presidential campaign of Sen. Elizabeth Warren, D-Mass.

He also noted that a billionaire's tax would hit his Silicon Valley constituency especially hard. And while Khanna called Manchin, with whom he disagrees, "a straight shooter," he had some harsher words for Sinema, who publicly has been more evasive when it comes to her specific objections to the social spending bill.

"You know exactly where [Manchin] stands. I disagree with areas, but I respect that," Khanna told "Fox News Sunday" host Chris Wallace. "My concern with Sen. Sinema is ... Why doesn't she explain herself? If she's shifted her position on Trump tax cuts, explain it. I guess I've never seen a politician -- including, frankly, the former president Trump -- who just totally ducks answering questions of the media and constituents, and that's my frustration with her, she's not clear about what she believes."

In Pelosi's wide-ranging interview Sunday on CNN, the House speaker also indicated she was open to using reconciliation to increase the debt ceiling and that she would be willing to pull back the filibuster to pass a voting-rights bill.

"The most important vote right now in the Congress of the United States is the vote to respect the sanctity of the vote, the fundamental basis of our democracy," Pelosi said. "If there were one vote that [pulling back] the filibuster could enable to go forward, that would be the vote."

Pelosi also said she thought the Justice Department should prosecute those who defy subpoenas from the House select committee investigating the Jan. 6 insurrection. The House voted to hold former Trump aide Steve Bannon in criminal contempt last week for refusing to comply with the committee's requests.

"It's important for us to find the truth about what happened on Jan. 6, an assault on our constitution, our Congress and our Capitol," she said.

Pelosi declined to answer whether she would run for reelection.

"I would have to have that conversation with my family first, if you don't mind," she said.

Information for this article was contributed by Amy B. Wang and Greg Jaffe of The Washington Post and by Hope Yen, Lisa Mascaro and Alan Fram of The Associated Press.