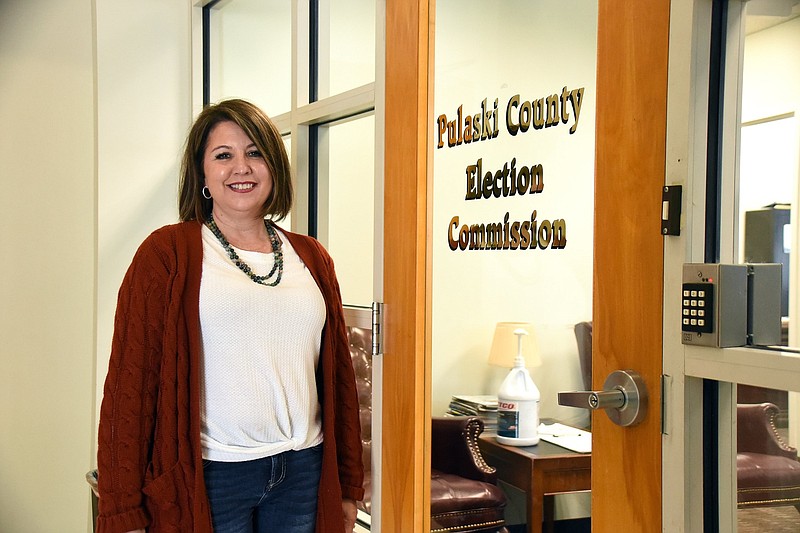 Melinda Lemons, the director of elections for Pulaski County, poses for a photo Friday, Oct. 22, 2021, at the Election Commission office in Little Rock. (Arkansas Democrat-Gazette/Staci Vandagriff)

Overseeing elections in Pulaski County can be a more fraught job than meets the eye.

Melinda Lemons, the new director of elections for the Pulaski County Elections Commission, has taken over a staff that has seen employees fired, quit, decertified and even an altercation that led to a police report.

Now with less than a month to go before two elections, Lemons has returned to her old job overseeing the county's election staff.

The Pulaski County Election Commission will be running two upcoming elections: the annual school election Nov. 2 and the special election for the city of Little Rock on Nov. 9.

Lemons said she has some "apprehension" about the coming elections, given it takes months for officials to prepare for an election, but she said the election staff prepared well before her arrival earlier this month.

"It's a good thing I understand elections and I know where we're at with them," Lemons said.

Susan Inman, the lone Democrat on the commission, praised Lemons' hire, saying Lemons' experience and close relationships with both her and Republican commission chairwoman Kristi Stahr have helped ease tensions.

Lemons previously worked under Inman during their previous stints at the Pulaski County Election Commission.

"It's kind of a bridge to everyone's relationships to make things better all the way around," Inman said of the Lemons hire.

Lemons takes over about a month after the interim director of elections, Shawn Camp, was relieved of duties after he told staff he was leaving the country for two weeks just before Little Rock's September sale tax referendum.

But the November 2020 election is what brought out the most controversy between staff and a Republican commissioner.

Acrimony between some staff members and commissioners was well known and became an issue of political fodder as the commission's two Republican members voted to decertify the previous director of election, Bryan Poe, in January.

Poe resigned in March after returning from paternity leave, citing a desire to spend more time with family.

Lemons said she hasn't spent a lot of time looking into the details of what happened.

"I really didn't want to get into the controversy," she said. "... I mainly just want to focus on going forward."

Now Lemons is tasked with managing upcoming elections and redistricting, the latter of which has been delayed because of the covid-19 pandemic.

With a delay in the U.S. census, the Arkansas Board of Appointment has been late in releasing new maps for state House and Senate districts that will give the commission little time to act on ballots.

A native of Harrison, Lemons came to Pulaski County in 2006 after serving as the Boone County clerk.

Lemons said her experience as an elected official helped prepare her for the intricacies of election bureaucracy, suiting her for a career with Pulaski County as a voter registration supervisor and then with the Pulaski County Board of Elections until 2013.

Lemons has spent nearly six years as a project manager for the Arkansas Department of Transformation and Shared Services.