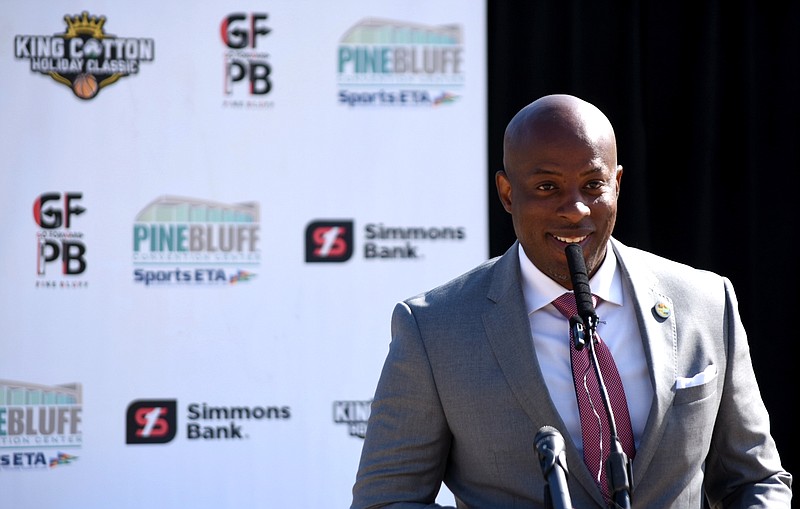 A team that went undefeated in Texas last season, a back-to-back Missouri state championship club, and a team with family ties to the NBA will join three Pine Bluff-area squads in the latest edition of the King Cotton Holiday Classic.

Tournament director Samuel Glover announced 16 boys and four girls teams that would compete in the Dec. 27-29 high school basketball event at the Pine Bluff Convention Center. This will be the third edition of the Classic since it was relaunched in 2018, with the 2020 version scrapped due to covid-19.

Coaches and players from Pine Bluff, Watson Chapel and White Hall, which will play in the classic, joined others at the formal announcement at the Sixth Avenue Plaza across from the Pine Bluff/Jefferson County Main Library.

Pine Bluff is returning a large number of varsity players from a 5A-South Conference championship team that made a state quarterfinal finish last March. The Zebras won 13 straight games coming off a 36-day pause through the Christmas break due to covid-19 issues.

Watson Chapel was runner-up in both District 8-4A and the 4A-South Region tournaments and came from a 2-7 start to win 11 straight games. White Hall was 5-19 under then first-season Coach Josh Hayes, but the Bulldogs now have his 6-6 son Jai’chaunn, the top-ranked freshman in the state.

The other boys teams include:

• Calvary Baptist Academy of Shreveport, which has won Louisiana District 1-1A and reached the Division IV state finals in back-to-back years

• Magnolia High School, the District 8-4A and 4A-South Region champ that features Arkansas Gatorade Player of the Year and Razorback commit Derrian Ford

• North Little Rock High School, the reigning 6A state champ which gained the top-ranked player in the state and Arkansas commit Nick Smith Jr. from Sylvan Hills High and also features the No. 2-ranked player, University of Oregon commit Kel’el Ware, and

• Raymond (Miss.) High School, which has finished as state runner-up the past two years after winning three straight 4A championships.

A girls division will be contested for the first time since the early 1990s. The teams include:

• Watson Chapel, last season’s District 8-4A runner-up and state tournament qualifier which has a returning starter in 5-5 guard Tatyana Barbee

• Huntington, of Shreveport, the back-to-back 4A state runner-up in Louisiana

• Hutchinson School for Girls of Memphis, and

The original King Cotton was founded in 1982 and ran through 1999. It showcased future college and NBA stars such as Christian Laettner, Jason Kidd, Corliss Williamson and Joe Johnson.

Tickets for this year’s Classic will be available starting Nov. 15 at KingCottonClassic.org.