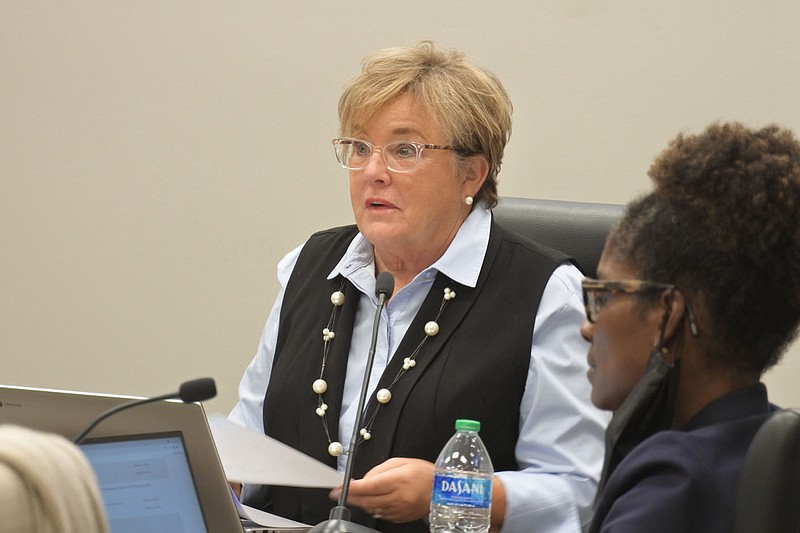 FORT SMITH -- The School District may partner with an outside entity to allow more students to use alternative learning at less of a cost to the district.

The School Board heard a proposal from the Plumerville-based Arch Ford Education Service Cooperative for new alternative learning programs for the district's K-12 students at its meeting Monday. The board will consider partnering with Arch Ford at a later date.

Tiffany Bone, assistant superintendent of curriculum and instruction for the School District, said the proposal, if approved, would extend additional offerings and opportunities for students.

The district's current alternative education program includes its Belle Point Center for students in grades 6-12 and opportunity centers at Beard and Carnall elementary schools for K-5 students, according to Bone.

Gregg Grant, executive director of Arch Ford, said the cooperative provides a variety of services to more than two dozen Arkansas school districts, such as the Russellville and Conway districts. This includes alternative learning services.

Jason Burkman, director of nontraditional learning for Arch Ford, briefed the School Board on two programs the cooperative offers -- Alternative Education and the Hub. Alternative Education is designed to meet K-12 students' educational, behavioral, mental health and medical needs that can't be adequately addressed in a traditional school environment.

The Hub is a school-to-work program, according to Burkman. It's designed to give high school students who are "losing their way at school" and looking to leave the public school system an array of flexible learning options. Many Hub students not only get credit from the jobs they may have through the program, but also other things such as tuition assistance in certain cases.

"So we explain to those students that even though they may have had a rough start at the beginning of their high school career, they could salvage that and go on and further their career down the road with education or in the workforce," Burkman said.

The School District's alternative learning program has served an average of about 100 K-12 students over the past two years with 21 staff members at a cost of more than $1.3 million per year, Burkman said. It has received more than $474,000 from the state for alternative education yearly based on this number of students, resulting in a deficit of more than $828,000.

Burkman said Arch Ford's model would seek to serve about 240 district students with 23 staff members yearly. This would potentially generate more than $1.12 million in state revenue against more than $1.18 million in costs, bringing the deficit down to just over $58,000.

Charles Warren, chief financial officer for the School District, called the savings a "significant factor" in this decision.

"This is real available money that can be used in other programs," Warren said.

Among Arch Ford's staff responsibilities for the potential venture would be nine certified teachers and lead instructional interventionists and one supervisor each for the Alternative Education and Hub programs, as well as a lead behavior manager, nurse and secretary, Burkman said.

Burkman said Arch Ford would begin the hiring process January through March. It would spend April through August conducting placement meetings and preparing for the first day of the program.

School Board Member Dalton Person asked what the partnership would mean for the district's existing employees at Belle Point Center. Burkman said he believed they would be allowed to decide whether to remain employed with the district or join Arch Ford.

Bone said the district would place alternative learning staff who chose the former as it had openings for which they were qualified.

There are 15 education service cooperatives in Arkansas. Fort Smith’s School District is part of the Guy Fenter Education Service Cooperative.