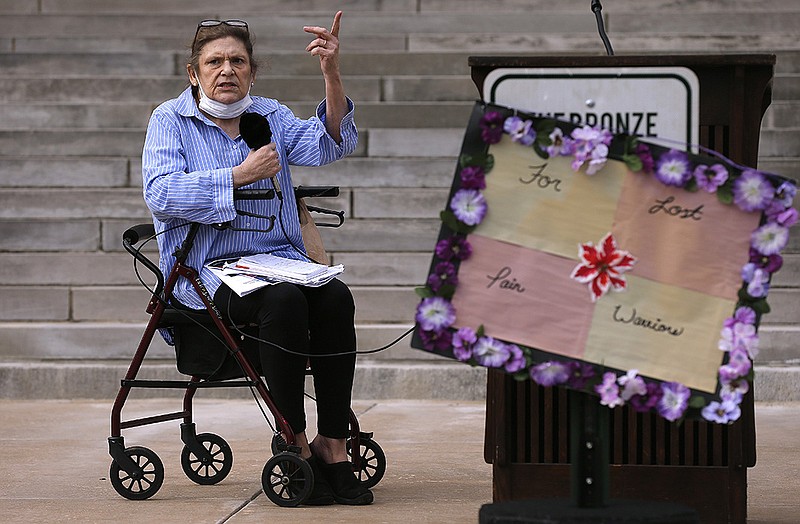 Jo Ellen Stodola sits in her walker while telling her story of chronic pain issues during the Don't Punish Pain Rally on Tuesday, Oct. 26, 2021, at the state Capitol in Little Rock. (Arkansas Democrat-Gazette/Thomas Metthe)

Jo Ellen Stodola's legs started shaking during her speech on the front steps of the Arkansas State Capitol on Tuesday morning.

She sat down on her walker with the help of Jerri Lynn Ramsay, the administrator of the Don't Punish Pain group's Arkansas chapter on Facebook. The group organized its sixth and final rally at the Capitol on Tuesday to speak against the U.S. Centers for Disease Control and Prevention guidelines that some chronic pain patients say prevent them from receiving the opioid medications that have successfully managed their pain and allowed them to live normal lives in the past.

Stodola, the wife of former Little Rock Mayor Mark Stodola, continued her speech while seated on her walker as her left leg continued to shake from a neurological condition.

"My back surgeon, the last time I visited him, my last visit consisted of him crying the entire time," she said. "He said for the first time in his 40 years of treatment, he could no longer look his patients straight in the eye and say, 'I can try to help you, I have something I know that works.'"

These chronic pain patients understand the need to address the nation's prescription drug abuse problem, but they see themselves as collateral damage. Guidelines meant to prevent opioid abuse have blocked their access to legitimate treatment.

The CDC released its guidelines in 2016 as part of its response to a rising death toll from opioid abuse and addiction. State-level guidelines and rules followed, including amendments to the Arkansas State Medical Board's regulations concerning malpractice. Rules that took effect in 2018 define "excessive" prescribing and outline requirements for documentation related to controlled-substance prescriptions.

The state and federal guidelines are not formal restrictions, but patients said their doctors treated the guidelines as hard rules and reduced or canceled opioid subscriptions as soon as they took effect.

"[They] didn't just change the way doctors medically treated their patients, but also changed their attitudes towards and general treatment of patients with never-ending pain," patient Jennifer Shelton of Jacksonville said.

Shelton's doctor completely canceled her opioid prescription, and physical therapy and injections have not helped, sometimes even increasing her pain, she said.

She was one of many speakers to assert that government has no place in the doctor-patient relationship and that opioid use for chronic pain does not contribute to addiction and death from opioids.

State Sen. Terry Rice, R-Waldron, also acknowledged these issues in an interview Tuesday. He was not at the rally but has supported Don't Punish Pain's efforts in the past. He said he has experienced some chronic pain but "kind of came out the other side."

"[The guidelines] do what government tends to always do -- they overcorrect the problem with a broad brush," Rice said. "I've talked to people that have been in terrible car wrecks and have the scars to show for it, or that have had back surgeries like I have. I've talked to them every day, and they can get by and have a normalcy of life with what their doctor was willing to give them [before]."

Shortly after the guidelines were published, Don't Punish Pain emerged as a national network of chronic pain sufferers who connected on Facebook in light of the changes in their prescriptions. The Arkansas chapter has 439 people in its Facebook group.

Lisa O'Cain, the rally's moderator, said the group has testified at state legislative and medical board hearings, met with Gov. Asa Hutchinson and Attorney General Leslie Rutledge and spoken on a panel at a drug abuse summit in Jonesboro.

Some of the signs at the rally said "DEA stop terrorizing my doctor," referring to the federal Drug Enforcement Administration, "Government should not practice medicine" and "Untreated pain becomes statistics."

Stodola said in an interview that she expected a minimum of 25 people rather than "one of the lowest attendances." Some members' lack of computer access and some caution because of the covid-19 pandemic might have been contributing factors, as well as the difficulty of traveling while in pain, she said.

"I was so surprised, but it just means that a lot of people are in pain right now," she said.

'WE ASK FOR FUNCTION'

The maximum dosage that doctors proceeded to adopt "doesn't even touch some people's pain," Rice said.

In 2019, the authors of the CDC guidelines published an opinion piece warning against "inflexible application of recommended dosage and duration thresholds and policies that encourage hard limits and abrupt tapering of drug dosages, resulting in sudden opioid discontinuation or dismissal of patients from a physician's practice."

The same year, the American Medical Association published a memo stating that "some patients with acute or chronic pain can benefit from taking opioid pain medications at doses greater than generally recommended in the CDC Guideline ... and that such care may be medically necessary and appropriate."

National increases in opioid deaths have coincided with an all-time low of opioid prescriptions, so attributing the former to the latter is inaccurate, Stodola said.

"We don't ask for drugs. We ask for function," she said. "We want to do things with our families. We want to get out of bed."

In November 2020, the Arkansas Department of Human Services established an online dashboard of opioid-related data, including prescriptions, arrests, overdoses and deaths.

O'Cain said one of every 10 people who die by suicide is a chronic pain sufferer. Maria Hill, a breast cancer survivor from Mayflower and a co-founder of the Arkansas chapter of Don't Punish Pain, said some people have lost loved ones to suicide related to chronic pain.

Stodola said chronic pain patients are "compliant" with their prescriptions and make them last as long as possible, while someone addicted to opioids would do the opposite and exhaust a bottle of pills quickly.

"We do not go after a high," she said. "We have never gone after a high. We just want my leg to quit shaking while I'm sitting in this chair."

CORRECTION: Maria Hill, co-founder of the Arkansas chapter of Don’t Punish Pain, recalled at a rally on Tuesday that some people have lost loved ones to suicide related to chronic pain. An earlier version of this story incorrectly reported Hill’s comments.