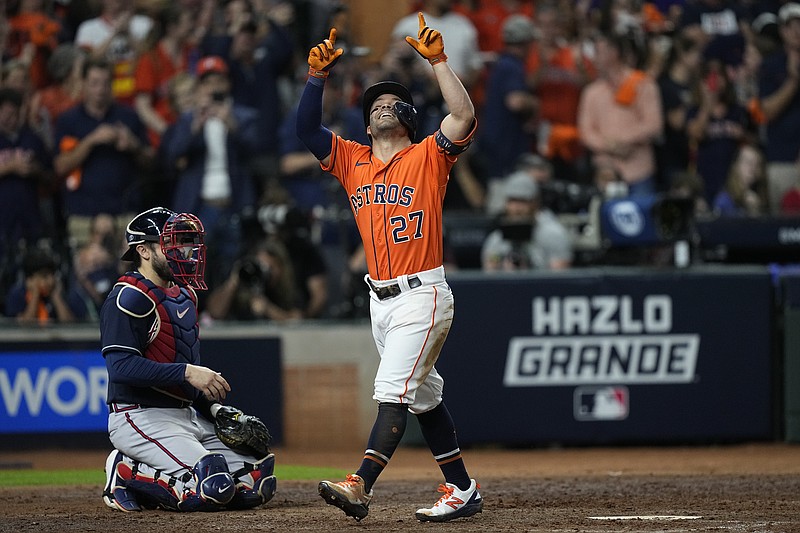 Houston Astros' Jose Altuve celebrates after a home run during the seventh inning in Game 2 of baseball's World Series between the Houston Astros and the Atlanta Braves Wednesday, Oct. 27, 2021, in Houston. (AP Photo/David J. Phillip)

ATLANTA -- His day on the diamond almost done, Jose Altuve walked over to a clutch of Astros fans clustered behind the netting down the right field line at Minute Maid Park.

For five minutes, he autographed World Series programs, No. 27 jerseys and other items, many of them for kids. A young girl got a ball with Altuve's signature and joyfully turned to her mother.

"I'm about to cry," the mom said Wednesday night.

Altuve's team liked the signs they saw from him earlier in the evening, too.

In a Fall Classic devoid of drama so far, the big-swinging leadoff man is among the few stars to deliver any huge hits.

Bouncing back from the first three-strikeout game of his postseason career, plus a prolonged slump in the AL Championship Series, Altuve homered and doubled as Houston beat the Atlanta Braves 7-2, tying the matchup at 1-all.

As Astros Manager Dusty Baker said: "My dad used to tell me it's OK to get down, just don't stay down. So he didn't stay down."

After a rainy day off, they'll play Game 3 tonight at Truist Park, provided the weather is OK. Luis Garcia is set to pitch for the Astros against Ian Anderson. Both of them threw well in the games their teams won to clinch these spots.

It will be the first World Series pairing of rookie starters since the 2006 opener.

That night, Anthony Reyes led St. Louis over Detroit and its newcomer, Justin Verlander. This season, Verlander was on Houston's injured list while recovering from Tommy John surgery.

Astros reserve Marwin Gonzalez is the only player who has batted against the other team's starter.

"Hank Aaron used to say, if you've never faced a pitcher, you initiate him right away and then kind of kill his spirits," Baker said. "So hopefully, we can initiate him."

At 23, Anderson is already an October veteran. He's made seven postseason starts in two years, going 3-0 with a 1.47 ERA.

"He's been through a lot in a short major league career, a lot of big experiences, pitched a lot of big games here," Braves Manager Brian Snitker said Thursday.

Garcia, meanwhile, will be forced to bat with no designated hitter in the National League park.

"I like to hit," said Garcia, who's hitless in six career at-bats.

The Braves are 5-0 at home this year in the playoffs and are expecting a loud crowd.

"The atmosphere is awesome. Like I say, Braves country is real. It's real," Snitker said.

The Astros haven't visited Truist Park since 2017, the year it opened, meaning many of their players will be seeing it for the first time. The Astros hoped to work out at the stadium Thursday to get familiar with the "dimensions and the caroms and the corners," Baker said, but rain limited their activity.

The tarp covered the field all day and a few Astros tossed the ball in the outfield before the drizzle turned to showers. The temperatures were in the 50s -- a far cry from Houston -- and the same kind of weather was in the forecast for Game 3.

Altuve helped the Astros earn their split at home. A postseason perennial, the All-Star second baseman pushed aside a 3-for-24 skid in the ALCS and a hitless opener against the Braves.

Altuve tied former Yankees star Bernie Williams for second on the career postseason home run list with 22, trailing only the 29 by Manny Ramirez.

To Baker, there was nothing surprising about Altuve's performance. And he figures the other Astros infielders -- Correa, Bregman and Yuli Gurriel -- also will play key roles.

"We had some guys struggling and they said, well, wait till the playoffs, and we barely squeaked in," he said. "They said, hey, man, we're going to turn it on in the playoffs. I haven't seen many people in this game who can kind of turn it on when they want to."

Altuve has shown that. In 11 seasons, he's averaged a home run every 35 at-bats in the regular season; in 75 postseason games, he's homered once every 14 at-bats.

Baker recalled a slugger he managed in San Francisco, and a speedster who played across the Bay.

"Like I said, you don't find many players like that, where they have the ability or the mindset or the mind control to do it," he said. 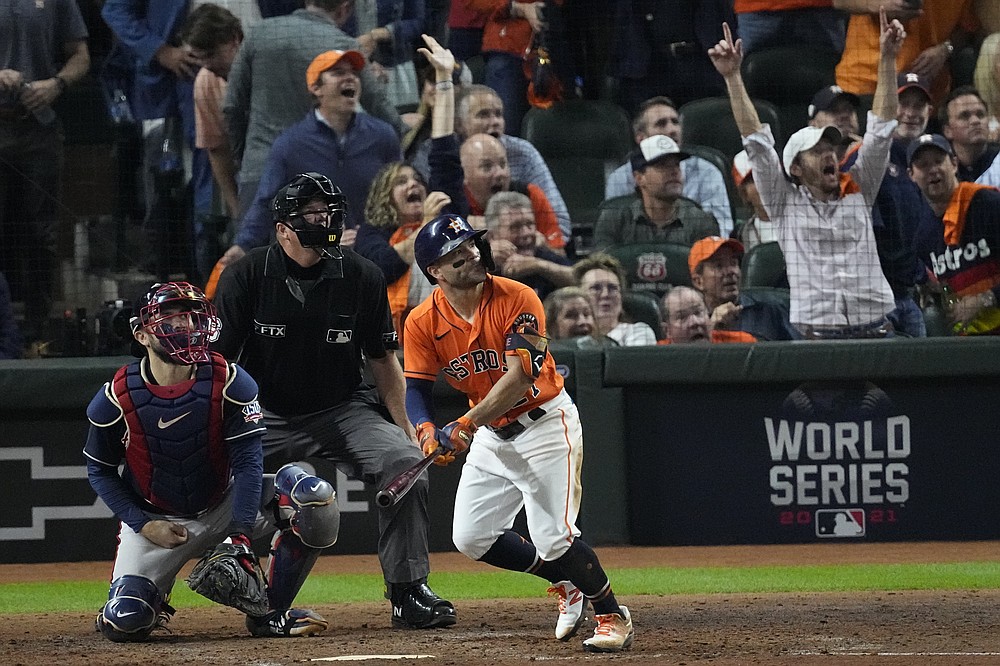 Houston Astros' Jose Altuve watches his home run during the seventh inning in Game 2 of baseball's World Series between the Houston Astros and the Atlanta Braves Wednesday, Oct. 27, 2021, in Houston. (AP Photo/Sue Ogrocki) 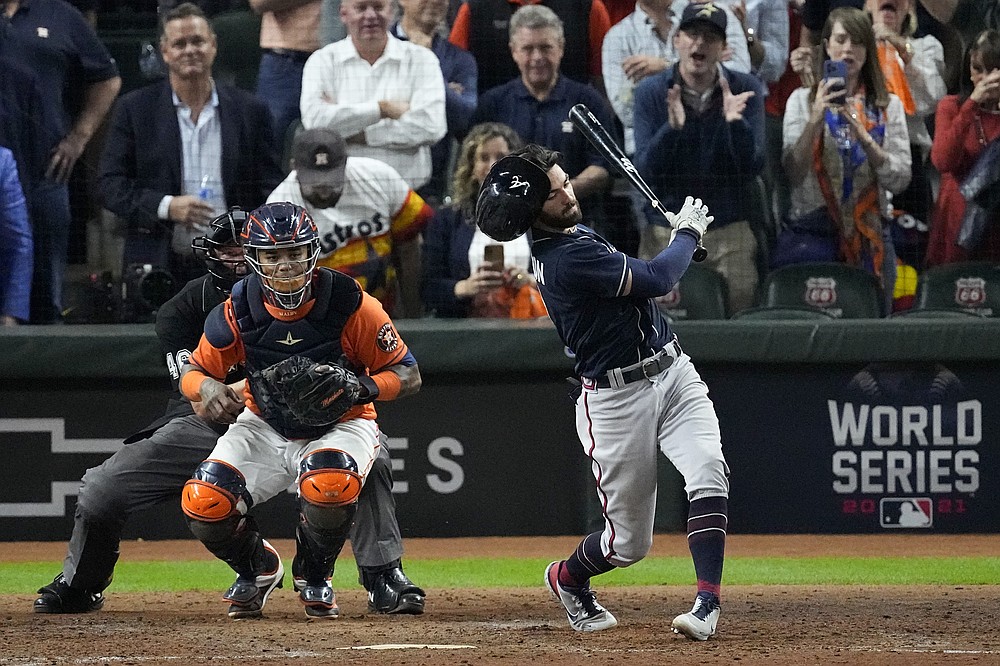 Atlanta Braves' Dansby Swanson strikes out to end Game 2 of baseball's World Series between the Houston Astros and the Atlanta Braves Wednesday, Oct. 27, 2021, in Houston. The Astros won 7-2, to tie the series 1-1. (AP Photo/Sue Ogrocki) 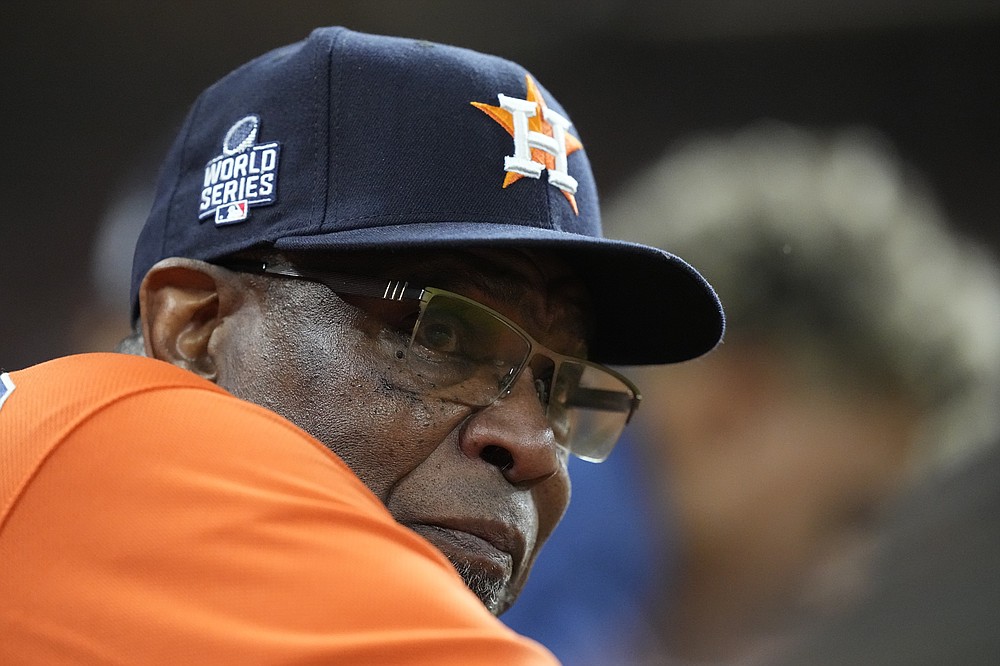 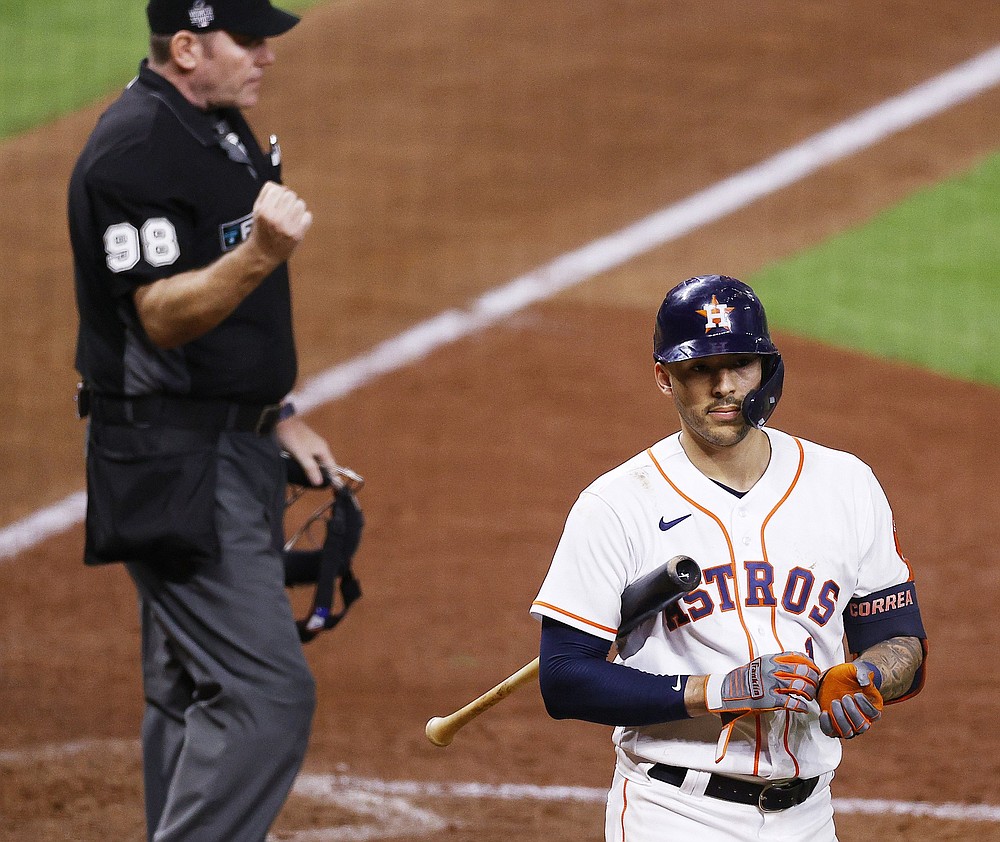 Carlos Correa of the Houston Astros heads back to the dugout after striking out against the Atlanta Braves on Tuesday during Game 1 of the World Series. The series is tied 1-1, but several of the top hitters on both teams are struggling at the plate heading into tonight’s Game 3. (AP/The Galveston County Daily News/Kevin M. Cox) 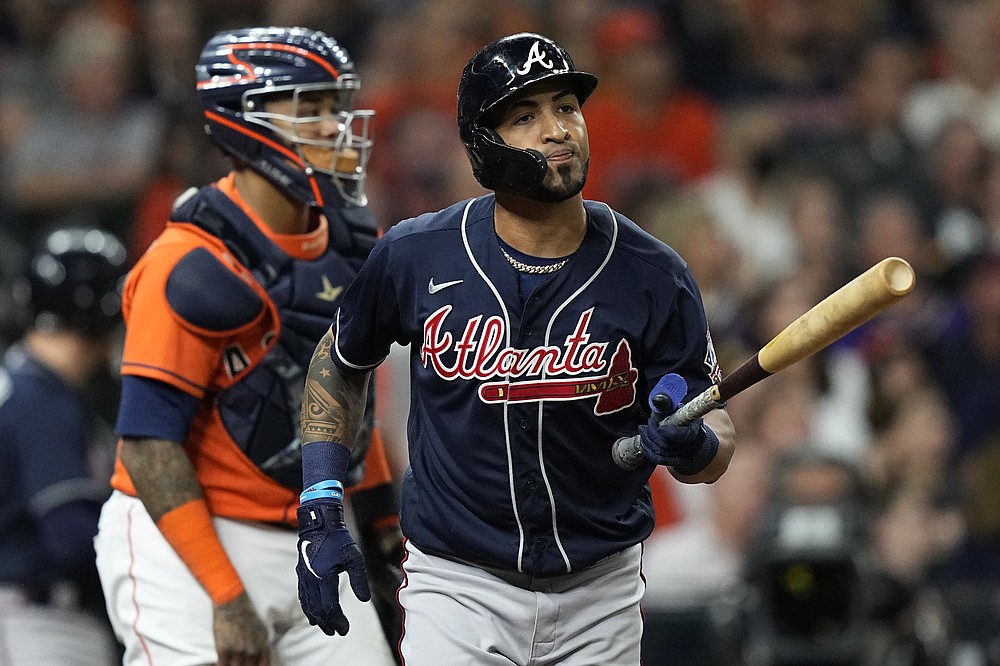 Atlanta Braves' Eddie Rosario flies out during the seventh inning in Game 2 of baseball's World Series between the Houston Astros and the Atlanta Braves Wednesday, Oct. 27, 2021, in Houston. (AP Photo/David J. Phillip) 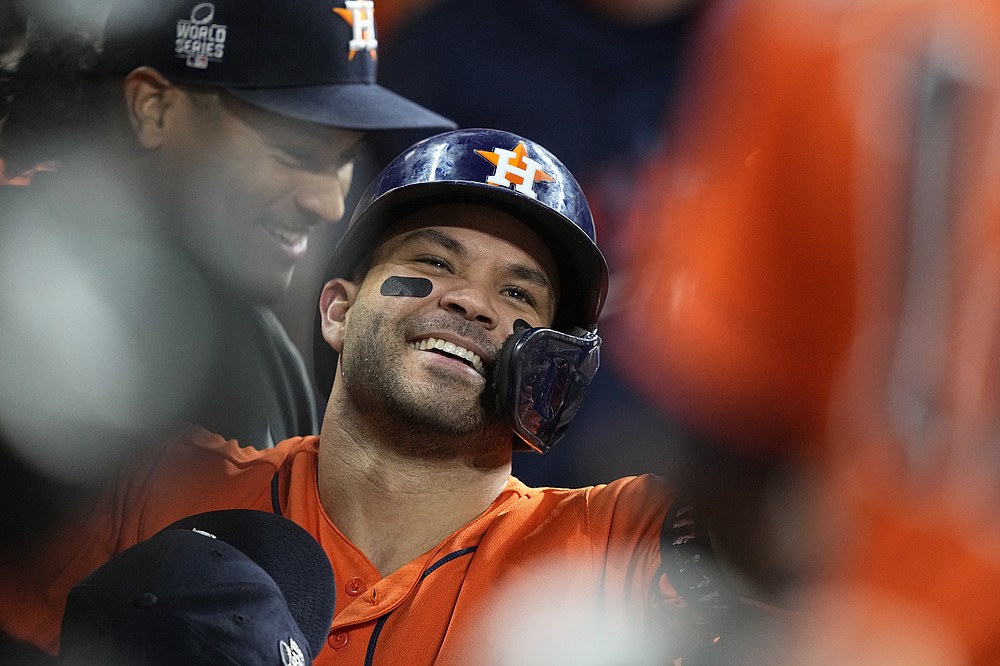 Houston Astros' Jose Altuve celebrates in the dugout after a home run during the seventh inning in Game 2 of baseball's World Series between the Houston Astros and the Atlanta Braves Wednesday, Oct. 27, 2021, in Houston. (AP Photo/David J. Phillip)