Sacrament technically received in pope’s archdiocese by The Associated Press | October 31, 2021 at 5:02 a.m. 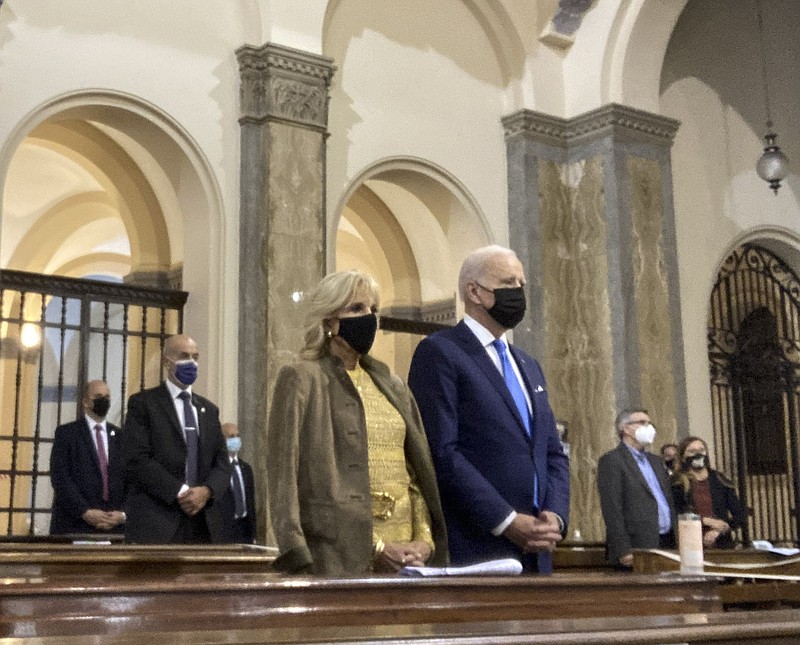 ROME -- President Joe Biden received Communion at St. Patrick's Church during Saturday Vigil Mass, a day after saying Pope Francis told him that he should continue to partake in the sacrament, despite opposition from some conservatives in the U.S. upset with his position on abortion.

Biden and his wife, Jill, visited the English-speaking church that is the main place of worship for the American Catholic community in Rome. The president dropped in between events at the Group of 20 world leaders' summit taking place in the city this weekend.

About 30 people attended the Mass, and security guards ringed the aisles. The Bidens sat in the last row that had been roped off as "Reserved" and entered quietly, just after Mass had begun.

The Rev. Joe Ciccone, the vice rector of St. Patrick's and a member of the Paulist order, said it was an honor to have them in the parish. Biden's position on abortion and whether to administer Communion was not an issue for him or the parish, Ciccone said.

"Communion is what brings us together in the Lord. None of us are pure and perfect. We struggle through life. We're all saints and sinners," Ciccone told The Associated Press after the service.

"And when you're a public figure you have to make certain decisions, especially in a democracy, on behalf of more than just your own personal feelings," he added.

The president's support for abortion rights has put him at odds with many U.S. bishops. American bishops are to hold their annual fall conference in mid-November and are likely to debate their stand on the president.

"Let us pray for the repentance of all who support the murder of the unborn," Bishop Joseph Strickland of Tyler, Texas wrote online.

The Rev. Steven Petroff, the parish rector who gave Biden the Eucharist, said he had never denied the sacrament to anyone.

"First of all, I don't know what is going on inside anyone's mind when they come to receive the Eucharist," he said. "Secondly, I am not the Eucharist police. The Eucharist, as Pope Francis and many popes have said, is medicine for those who need it."

Francis has stressed that he will not reject political leaders who support abortion rights, though Catholic policy allows individual bishops to choose whether to prevent people from taking Communion. When asked recently whether he would refuse the sacrament to Biden, Francis did not give a "yes" or "no" answer but said bishops should be pastors, not politicians.

Information for this article was contributed by Zeke Miller and Trisha Thomas of The Associated Press.