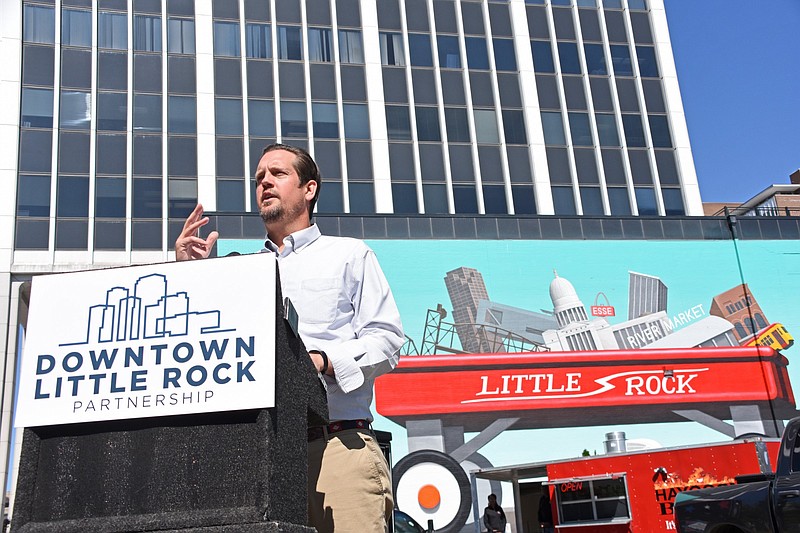 The executive director of the Downtown Little Rock Partnership said the 501(c)(3) organization will file amended statements with the IRS after the Arkansas Democrat-Gazette identified omissions in its recent reports.

The tax-exempt nonprofit had reported that Executive Director Gabe Holmstrom's compensation was zero during at least three years -- 2017, 2018 and 2019 -- according to copies of its publicly available Form 990. Those same forms filed with the IRS also said the nonprofit had no employees during each calendar year.

In an email exchange, Holmstrom confirmed the nonprofit plans to file amended reports for the three years.

The financial reports were prepared by Mike Schaufele of the Rasco Winter Thomas Group, a Little Rock accounting firm, according to Holmstrom. When asked what led to the omissions, Holmstrom wrote, "You would have to ask him."

The Downtown Little Rock Partnership is set to receive millions more in funding from the city, on top of significant preexisting municipal support, in the event voters approve the "Rebuild the Rock" sales-tax increase on Sept. 14.

Mayor Frank Scott Jr. has spearheaded the proposal, which would add 1 percentage-point to the city's sales-tax rate for a net increase of five-eighths of a percentage point in light of a separate sales tax used for capital improvements that will expire Dec. 31.

According to a spending resolution approved June 29 by the Little Rock Board of Directors, the Downtown Little Rock Partnership would receive approximately $5.5 million over the 10-year lifetime of the tax to support its ambassador program.

Asked if Little Rock taxpayers should be concerned about giving roughly half a million additional dollars per year to the nonprofit under the tax package when the group has apparently filed incomplete reports with the IRS for the past several years, Holmstrom said no.

"The 990 is financially accurate. As you can see on page 1 of the 990 all salaries paid out in 2019 are accounted for," he wrote in an email. "There was a clerical error that will be corrected with a revised 990, but that error did not impact the accuracy of the finances reported in the 990."

Holmstrom initially declined to provide his salary to the Democrat-Gazette in an interview for an Aug. 30 article, but later told the Arkansas Times that his salary in 2019 was $135,000.

[NEWSLETTER: Sign up for the Week in North Little Rock email at arkansasonline.com/emails]

In 2019 -- the most recent year for which its 990 filing was available -- the Downtown Little Rock Partnership reported total expenses were $826,063, according to the tax form. Assuming the figure is accurate, Holmstrom's salary represented roughly 16% of the organization's expenses that year.

Overall salaries, compensation and benefits paid out by the nonprofit in 2019 amounted to $343,667, meaning Holmstrom's pay was nearly 40% of the category.

The additional city dollars to the nonprofit are intended to support the ambassador program directly, and no money from the proposed sales-tax increase will be used to boost salaries, according to Holmstrom.

The nonprofit's ambassadors wear brightly colored uniforms and roam downtown to assist visitors, pick up trash and help address issues that might require contacting the police.

Two ambassadors are working with the Downtown Little Rock Partnership at the moment -- one of them contracted through a security firm -- although the group has relied on as many as four in the past, Holmstrom said recently.

He provided an estimated financial breakdown this week that showed the nonprofit wants to hire 11 ambassadors, plus a manager and social worker, for an annual total of $553,514 in expenses.

Four ambassadors would be assigned to the Main Street neighborhood known as SoMa, three to the central business district and four to the River Market District, according to the chart.

The amount budgeted for the group from the city in 2021 as an outside-agency allocation is $145,000, he said. Other contracts provide funding to the nonprofit for events and programs such as the ambassadors.

Slightly more than $102,000 has been provided to the nonprofit so far this year through August, Watson said in an email.