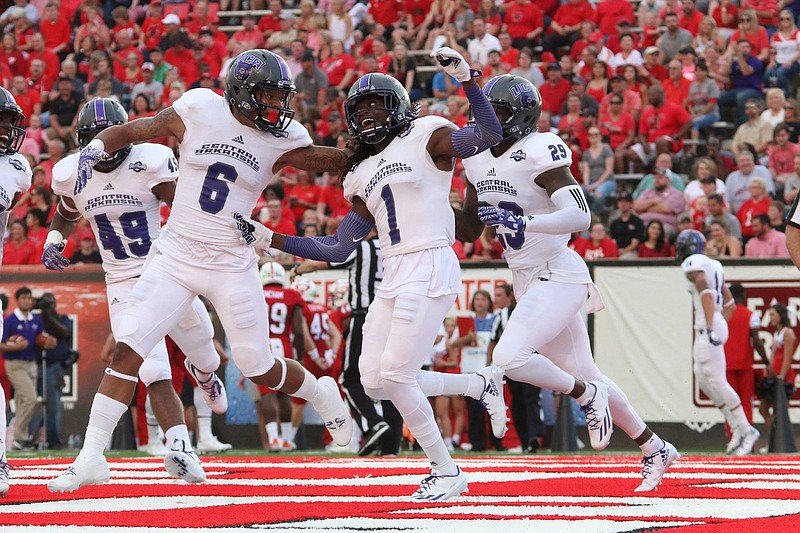 Central Arkansas’ Tremon Smith (1) celebrates with teammates after returning a punt for a touchdown during the Bears’ 28-23 victory over Arkansas State at Jonesboro in 2016. Nine UCA players on the roster that day will play against ASU on Saturday. (Photo courtesy of the University of Central Arkansas)

The first time Toby Sanderson traveled with the University of Central Arkansas football team was on Sept. 24, 2016.

Then a redshirt, he took in a crucial game from the sidelines, as the Bears took down in-state foe Arkansas State 28-23 at Centennial Bank Stadium in Jonesboro. In particular, he remembers UCA's first touchdown of the game, a 47-punt return about seven minutes into the contest.

"It was really a pivotal moment for just the energy in the game," Sanderson said. "You kind of knew like, 'We're going to get this win.' It kind of set it in stone."

The win was the Bears' last against the Red Wolves, but they'll get another crack Saturday in a season-opening matchup. This time, Sanderson, who has started 32 consecutive games on the offensive line for UCA, will be one of the Bears' nine super seniors.

Sanderson -- as well as JW Jones, Tobias Enlow, Sam Camargo, Justin Morris, Trenton Dunn, Jack Short, A'Javius Brown and Nathan Grant -- make up UCA's group of super seniors, but they're only a fraction of the experience on UCA's roster. The Bears also have nine other players who've completed a degree, including starting quarterback Breylin Smith.

"It's made for such a clean, consistent fall camp and leading up to game planning for the first game," UCA Coach Nathan Brown, who was the Bears' offensive coordinator during the 2016 victory, said. "So anytime you play an unknown team like Arkansas State, it's nice to have this veteran leadership amongst peers and in the student-athletes."

"It'll be interesting to see what Arkansas State brings to the table," Sanderson said. "I think there's some things that we have to look out for game-plan wise, but when it comes down to it, they won't have the same chemistry that we've built up over the past four, five years together. I think that could create issues for them."

While UCA last beat the Red Wolves five years ago, it last played them in 2020, losing 50-27 in Jonesboro. But with Blake Anderson now coaching at Utah State, former Tennessee head coach and Alabama assistant Butch Jones is leading a team that includes 22 transfers. It's made for a week of game planning that's been all over the place for the Bears.

Despite such turnover, UCA hasn't tried to "reinvent the wheel" while game-planning, Brown said.

"That's the chess match," Brown said about the turnover. "There's a lot of unknown when you go into a game like this. We're gonna put together what we're good at, and our game plan is going to focus on the strengths of our offense, defense and special teams. It's hard enough to execute one game plan, much less people asking if you're putting two game plans in."

This is also the third year in a row UCA will be kicking off the season against a first-year staff, as the Bears welcomed Tyson Helton to Western Kentucky by beating him and the Hilltoppers 35-28 in 2019. They also beat Scotty Walden in his first game as Austin Peay's head coach in the first college football game of the season in 2020, winning 24-17.

With a chance to go 3-0 in their last three season-openers, a win Saturday could mean many things for the program. Looking back on it, Brown said 2016's win against ASU may have been UCA's biggest since it moved to Division I in 2007.

"Bottom line, when you talk about the stakes," Brown said. "You talk about the rivalry, you talk about recruiting battles, you talk about just being in the same state. It was huge. It's bragging rights, because it's a chance to beat a team that's allegedly bigger than you, being an FBS-to-FCS contest. I think anybody that was there that night understands the magnitude of that win." 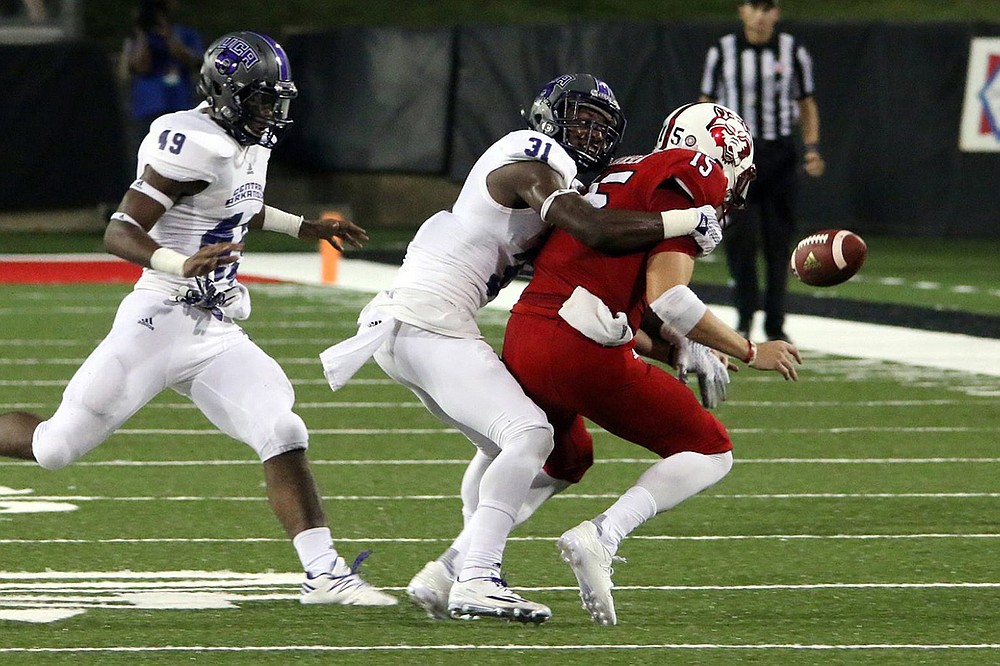 UCA linebacker George Odum forces a fumble by Arkansas State quarterback Justice Hansen during the Bears’ 28-23 victory over the Red Wolves in 2016 in Jonesboro. That was the last time the Bears defeated the Red Wolves, but they’ll get another chance to do so Saturday in the season opener for both teams. (Photo courtesy of the University of Central Arkansas)