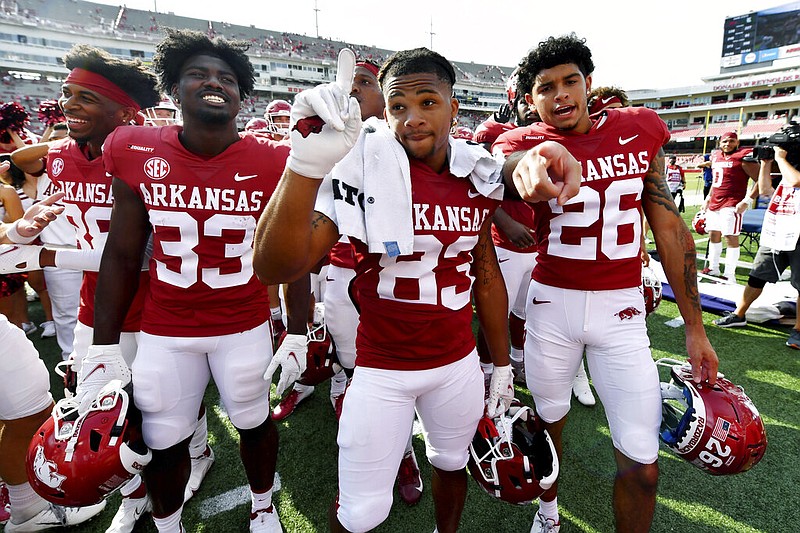 The University of Arkansas erased a 10-point deficit in the third quarter on their way to defeating Rice 38-17 in Coach Sam Pittman's first nonconference game with the Razorbacks.

Trelon Smith scored from 2 yards out with 12:44 left in the game to give the Razorbacks a 24-17 lead. Rice led 17-7 on August Pitre III's 41-yard touchdown reception from Wiley Green with 10:28 left in the third quarter.

KJ Jefferson had a pair or running touchdowns and connected with Tyson Morris for a 9-yard TD for a 31-17 advantage.

Jalen Catalon starred on defense for Arkansas, picking off two of the team's three interceptions.

The Razorbacks (1-0) trailed 10-7 at halftime after a penalty- and mistake-filled affair against Rice (0-1) at Reynolds Razorback Stadium.

The Razorbacks scored 31 unanswered points to beat Rice in the teams' first meeting since 1991, a 20-0 Arkansas victory.

LaDarrius Bishop went 28 yards with the opening kick and Austin Nix alertly pounced on his fumble there. KJ Jefferson couldn’t find a receiver on a roll-out took a 5-yard sack by Antonio Montero. Trelon Smith went 11 yards then Jefferson threw high on a slant for Treylon Burks. Bradley Rozner eluded Montaric Brown’s tackle try and went 20 yards with a catch to the Rice 49 before the Owls punted. Smith gained 20 yards on first down. Jefferson shook off linebacker Treshawn Chamberlain’s sack try and converted 3rd and 6 with a 7-yard run. Rocket Sanders ran for 12 on his first carry. Jefferson took a QB draw up the middle then left for a 34-yard TD. Grant Morgan was ejected for targeting for a hit on Rice QB Wiley Green. The Owls couldn’t move from there. Arkansas started at its 9 after a block in the back on the punt return and went three and out. Sean Fresch returned Reid Bauer’s 45-yard punt 16 yards and the Owls started at the Hogs’ 35. Rozner caught Luke McCaffrey’s 10-yard pass on 3rd and 8 to move the chains. Rice stalled at the Arkansas 18 and Collin Riccitelli’s 36-yard FG try went wide right. A holding call on Treylon Burks put the Hogs behind the sticks. De’Vion Warren and Burks had short receptions to set up 4th and 5 from the 24 to end the period.

Rice’s Kenneth Orji blocked Reid Bauer’s punt on the first snap of the period and the Owls started at the Hogs’ 21. Rice netted a first down but had to settle for Collin Riccitelli’s 25-yard FG from the prime field position. A big reception to De’Vion Warren was wiped out as he was an illegal receiver. The Razorbacks notched a first down, then Sean Fresch stepped in front of Jefferson’s short sideline throw for Ketron Jackson for an interception at the Hogs’ 49. Jalen Catalon logged a tackle for loss on 3rd down. Charlie Mendes’ punt went to the 10. Treylon Burks’ end around on 3rd and 2 went for a 2-yard loss. Bauer’s punt hung up in the wind and went 25 yards to the Arkansas 41. On 3rd and 3, the Owls ran a swing pass to Jake Bailey with a receiver blocking down on Montaric Brown for a 20-yard gain. Catalon’s hit out of bounds took the ball to the 7. Green’s 3rd down slant for August Pitre III fell incomplete in the end zone but LaDarrius Bishop was flagged for pass interference. Two plays later Jordan Myers scored a 1-yard TD. A holding call on Bishop’s kickoff return started the Hogs at the 11. On third and 3, Burks had to fall on a botched snap for a loss. Rice gained 5 yards and punted. The Hogs ran two plays and heard booing as they left the field trailing 10-7.

The Owls netted one first down on Jagger Bull’s 10-yard reception but stalled at the 41. Charlie Mendes hit a 17-yard punt and, with the aid of a 5-yard illegal formation tack-on penalty, Arkansas started at its 47. The Hogs went with a QB sneak on 4th at 2 at the Rice 45 and KJ Jefferson ran for only 1. August Pitre III caught a 15-yard pass over the right side, then broke free on a post behind LaDarrius Bishop and hauled in Wiley Green’s 41-yard TD pass. Bishop returned the kickoff 42 yards to the Arkansas 43. Tyson Morris brought in a one-hand catch for a 31-yard gain, then De’Vion Warren had a 10-yard grab to the 16. After three Trelon Smith runs notched a first down, Jefferson ran up the middle for a 5-yard score. Pitre’s 35-yard catch reached the Arkansas 42. Two more Luke McCaffrey passes netted 15 yards to the 27. McCaffrey scrambled for 5 yards on 3rd and 6, then Jalen Catalon and Bumper Pool stopped Jordan Myers wide left on 4th and 1. Treylon Burks had a 9-yard catch and Jefferson a 9-yard run to spark a series. Rocket Sanders had 6 carries for 32 yards and Blake Kern caught a 14-yard play-action pass. The Hogs bogged down at the 16 and Cam Little booted a 34-yard FG with 18 seconds left in the quarter.

LaDarrius Bishop was flagged for DPI. On the play after a holding call against the Owls, DL Markell Utsey tipped Wiley Green’s pass at the line, Jalen Catalon intercepted and returned it 39 yards. On 3rd down from the 8, Miles McCord was penalized for DPI against Warren Thompson in the end zone, setting up Trelon Smith’s 2-yard TD run. Montaric Brown picked off Green’s out pass at the 50. KJ Jefferson was sacked for an 8-yard loss. Ketron Jackson Jr. caught a 16-yard pass on 3rd and 18 and Reid Bauer punted to the 5. A targeting ejection on Bumper Pool pushed Rice to the 35, but the Owls bogged down. Isaiah Nichols forced a fumble from Green on 3rd down for a 7-yard sack. Jefferson kept on an option right for a 68-yard score on the first snap, but a holding call reduced it to a 38-yard gain. Treylon Burks caught a 16-yard pass with a personal foul added on then Jefferson hit Tyson Morris for a 9-yard score. Rice notched a first down before Zach Williams and Mataio Soli combined for a sack. Catalon picked off Green and returned it 44 yards to the 16. Dominique Johnson had 4 straight carries, the last a 3-yard TD up the middle. Luke McCaffrey hit Cedric Patterson for a 15-yard gain on the final play of the game.