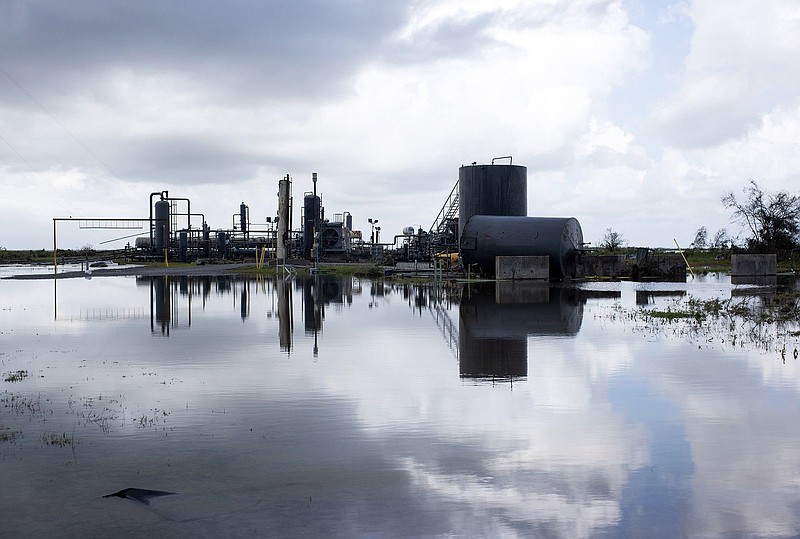 A refinery surrounded by water after Hurricane Ida near Cocodrie, La. Most of the Gulf of Mexico’s oil production remained shut down late this week as a result of the hurricane. (Bloomberg WPNS/Mark Felix)

Authorization to take 1.5 million barrels of crude from the government's emergency stockpiles came after President Joe Biden said Thursday that the U.S. would use all the tools at its disposal to increase the availability of gasoline and ease pressure on prices at the pump.

"This is the first such exchange from the SPR in four years and demonstrates that the President will use every authority available to him to support effective response and recovery activities in the region," the White House said in an emailed statement.

With refineries that represent nearly one-fifth of America's crude-processing capacity, Louisiana is grappling with fuel shortages that are hindering relief efforts, while pushing up gasoline prices across the country.

The government-run supply of emergency crude -- established in the aftermath of the Arab oil embargo in the 1970s and stored deep underground in salt caverns along the Gulf Coast -- has been used a few times after previous hurricanes.

Exxon will use the crude for its Baton Rouge refinery in Louisiana, according to the Department of Energy.

The Baton Rouge refinery has begun the process of restarting its units, which were shut ahead of Ida, the company said Wednesday.

"Our main focus has been to restore fuel production to supply gasoline and diesel needed in the local Louisiana market," Exxon said in an emailed statement.

Meanwhile, a critical port that serves as the primary support hub for the Gulf of Mexico's deepwater offshore oil and gas industry sustained less damage from Hurricane Ida's direct hit than initially feared and should be back to working operations "in the near future," a port leader said Thursday.

Ida knocked out Port Fourchon, but Chett Chiasson, executive director for the commission that operates Port Fourchon, said assessment teams were surveying the damage and "it did not look as bad as I thought."

Chiasson had previously raised serious concerns about the extent of the port's damage and the potential effect on the ability to move the nation's fuel supplies.