Hatcher flawless in relief for ASU 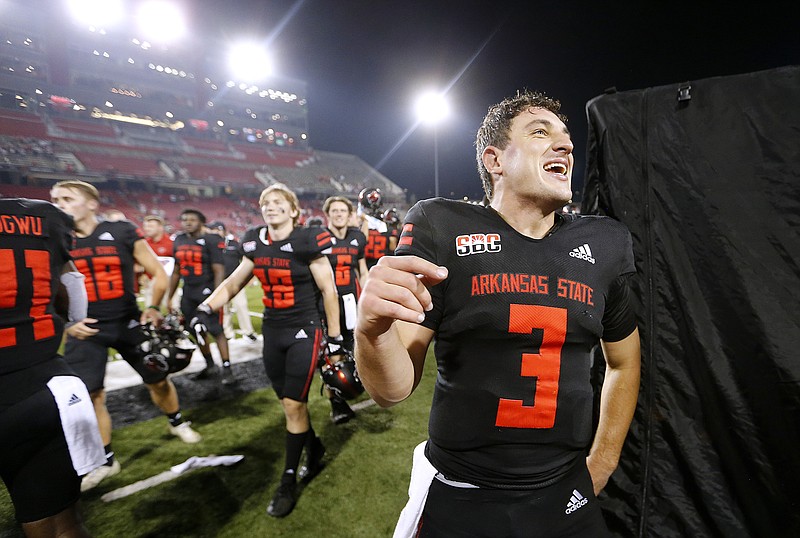 Even if he's in bed, Rucker will make his way over to catch passes for Hatcher, knowing what will be in his future: an Andy's Snowmonster concrete of vanilla custard chock full with strawberries and melted chocolate chips.

If that's the fee for a willing receiver, Hatcher is more than happy to pay -- especially when it leads to results like Saturday night.

Hatcher, replacing starting quarterback James Blackman late in the third quarter, completed all 12 of his pass attempts and piled up 150 yards and 4 touchdowns over the final 20 minutes, sending ASU flying past the University of Central Arkansas 40-21 in its season opener at Centennial Bank Stadium on Saturday night. Hatcher and Rucker connected for three touchdowns in less than seven minutes, giving the Red Wolves a desperately needed spark after looking indecisive early and trailing 7-6 at halftime.

"Layne Hatcher is an incredible human being," Coach Butch Jones said after winning his ASU debut. "It just shows you -- things didn't turn out the way he wanted it to, and we spoke about that. But he's a great competitor. He has great competitive character, he was ready to go, and he made the most of his opportunity."

In an ideal world, Jones wouldn't have made the midgame switch. He said early last week that he wanted whoever his starter was to gain rhythm, and he didn't plan on alternating series like ASU did a year ago at the position.

When Blackman's helmet popped off in the midst of a series -- the second time the Florida State transfer's lid had come loose on the night -- Jones didn't have a choice.

Then Hatcher gave Jones no choice but to leave him in.

"We have two very, very good quarterbacks, and we're very blessed and fortunate to have that," Jones said. "But Layne flipped the momentum for us, he made some big plays for us, and we're going to go with the hot hand."

Two plays after Hatcher stepped onto the field -- to vociferous cheers from the home crowd -- the Little Rock native rolled left and lofted his first pass of the night to Rucker, who scampered in for the score.

Although the Red Wolves had scored on the previous series to take their first lead of the night at 13-7, the score seemed to take a weight off everyone's shoulders on the ASU sideline.

"[The momentum] just takes over. We all feel that," said defensive end Kivon Bennett, who finished with a sack and three tackles for loss in his first game as a Red Wolf. "When we play complementary football -- the offense is firing, the special teams are firing, everybody's doing what they're supposed to do -- it just makes everybody's job a whole lot easier."

Breylin Smith and the Bears bounced back quickly, marching 81 yards in 2:14 as star wideouts Tyler Hudson and Lujuan Winningham each made impressive grabs.

Hatcher then returned to the field and led the Red Wolves on a seven-play, 83-yard drive of his own. ASU (1-0) capitalized on a pair of penalties by UCA (0-1) that extended the series, and Hatcher hooked up with Rucker again for an 8-yard touchdown.

Thirteen seconds later, the Red Wolves had the ball again after cornerback Samy Johnson picked off Smith. It took just one play for the Hatcher-Rucker connection to strike once more, this time a 33-yard fade to put ASU up 33-14.

"My job is to stay out there until they tell me to come off [the field]," Hatcher said when asked about coming in as the backup. "It changes nothing in how I prepare for games and how I look at myself -- it just changes the number of snaps I'm on the field.

Rucker wasn't the only receiver to benefit from Hatcher's presence. TCU transfer Te'Vailance Hunt caught a late touchdown -- part of a 6-catch, 96-yard performance -- and Jeff Foreman hauled in 5 balls for 55 yards on 7 targets.

But Hatcher and Rucker's chemistry was evident. It's been building since Rucker arrived in Jonesboro last summer and it showed in the Red Wolves' 2020 finale when the pair linked up for three of Rucker's school-record four touchdown grabs.

He'd have earned it, though.

"Relationships off the field carry into relationships on the field," Hatcher said of his connection with Rucker. "It makes me happy to see [Corey] succeed because I know he's willing to work."