Since June, covid-19 illness in kids way up 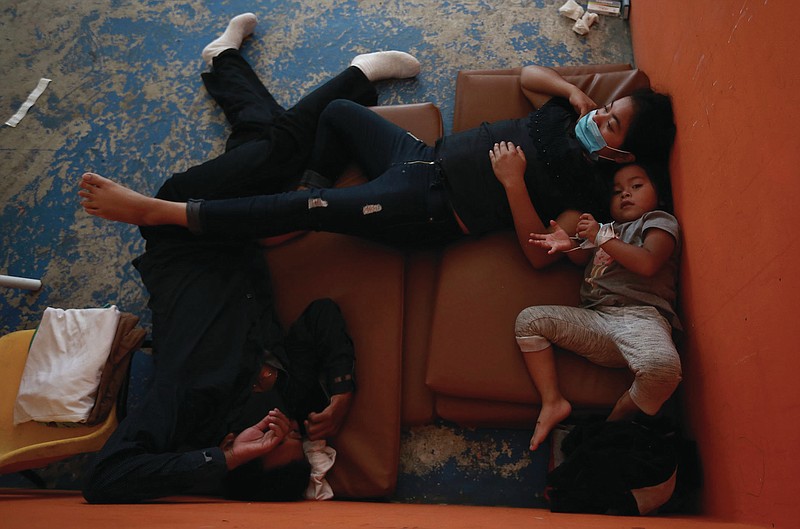 Guatemalan migrants who were expelled from the United States, sit in isolation after testing positive for COVID-19, in a shelter in Ciudad Juarez, Mexico, Saturday, Sept. 4, 2021. More photos at arkansasonline.com/95covid19/. (AP Photo/Christian Chavez)

Pediatric hospitalizations for covid-19 have soared over the summer as the highly contagious delta variant spread across the country, according to two new studies from the Centers for Disease Control and Prevention.

At least 452 children in the U.S. have died of covid-19 since the pandemic began, a tiny fraction of the 639,000 deaths among the nation's adults. That lopsided tally has led many to downplay the pandemic's toll on kids.

But from late June to mid-August, hospitalization rates in the U.S. for children and teenagers increased nearly fivefold, although they remain slightly below January's peak, one new study found.

And especially since the arrival of covid-19 vaccines and the delta variant, kids' prospects rest largely on the decisions made by the adults around them.

Vaccination has made a difference. When adults and eligible adolescents get vaccinated in large numbers, younger children are at greatly reduced risk of becoming seriously ill with covid-19, the new reports show.

During a six-week stretch of June and July, fully vaccinated adolescents older than 12 were 10 times less likely to be admitted to a hospital with covid-19 than were their unvaccinated peers.

In a period when the delta variant predominated, the CDC concluded, "vaccines were highly effective at preventing serious covid-19 illness in this age group."

But younger kids remained at the mercy of decisions made by grown-ups in their communities.

The authors of the new reports emphasized that for those too young to be immunized themselves, making sure that teachers are vaccinated and implementing other measures to prevent transmission of the virus will be "critical." That includes universal mask-wearing in schools, vaccination of kids age 12 and over, and the use of face coverings among toddlers older than 2 in day care centers.

Both reports were published Friday in the CDC's Morbidity and Mortality Weekly Report.

The studies do not provide clear answers about whether delta causes more severe disease in children than earlier versions of the virus. The rise in pediatric hospitalizations could also be because of the variant's high infectiousness.

Indeed, one study concluded that the proportion of hospitalized children with severe disease had not changed in late June and July, when the delta variant became dominant in the U.S.

The rates reported in the CDC studies are based on data from two national surveillance systems, including hospitals in 49 states and Washington, D.C.

In one CDC study, researchers found that since July, the rate of new coronavirus cases increased for children 17 or younger, as did covid-19-related emergency room visits and hospital admissions.

"We saw that ER visits, cases and hospital admissions are rising," said Dr. David Siegel, lieutenant commander in the U.S. Public Health Service and the lead author of the paper. "It could be that delta is more severe or that delta is more transmissible, and it could be related to other factors such as masking."

The study also found that covid-19-related emergency room visits and hospital admissions among children were more than three times higher in states with the lowest vaccination coverage compared with states with high vaccination rates, underscoring the importance of communitywide vaccination to protect children. Other important factors that might affect regional differences included masking and social distancing measures, the study noted.

The proportion of covid-19 patients under age 17 who were admitted to intensive care units ranged from 10% to 25% from August 2020 through this June, and hovered at 20% by July, according to the CDC study.

In a second study, researchers analyzed data from the COVID-NET surveillance network, which includes information on hospitalizations in 99 counties across 14 states.

But the weekly rates have been climbing since July. During the week ending Aug. 14, there were 1.4 covid-19-related hospitalizations for every 100,000 children, compared with 0.3 in late June and early July.

That remains slightly below the peak weekly rate of 1.5 hospitalizations per 100,000 children, in early January 2021, in the post-holiday wave of cases.

Hospitalization rates have increased most sharply for children who are 4 or younger. In the week ending Aug. 14, there were 1.9 hospitalizations per 100,000 children in that age group, nearly 10 times more than in late June.

But based on the limited data available so far, it does not appear that the delta variant is affecting the incidence of severe disease or deaths among children, which have been steady and relatively low throughout the pandemic.

Among the children and adolescents hospitalized from June 20 to July 31, 23.2% were admitted to the ICU, 9.8% required mechanical ventilation and 1.8% died. Those figures were roughly the same as those for children who were hospitalized before the delta variant became widespread.

Alabama schools reported more than 9,195 virus cases in students and staff members in the past week, a surge that has caused more schools to make temporary switches to remote learning.

A state dashboard was updated Friday with information from 84 of the 143 school districts. Superintendent Eric Mackey first disclosed the number during an event Thursday with the Medical Association in Alabama.

Mackey said the statewide spike in covid-19 cases -- fueled by the highly contagious delta variant -- came at the same time schools were opening for the academic year.

"We had dozens of students sent home on the first day of school, and then more and more," Mackey said. "Now we have scores of campuses that are closed to in-person instruction."

Mackey said schools are trying, if possible, to avoid closing for long periods of time. He said forthcoming standardized test results, which have not yet been released to the public, will show scores took a hit last year when schools closed to in-person instruction.

"They are going to be significantly down across the board," he said. "That's what we expected. It's what we predicted, and we hope that we can turn that around this year."

Over the past four weeks, people age 5-17 accounted for 21% of all virus cases in Alabama, even though they constitute 16% of the population.

Students at Bessemer City High School walked out of classes Thursday in a protest over virus precautions, news outlets reported.

"Until the number's down, and they get this under control, I think it's imperative that they go back to virtual," Kenyatta Watkins, the mother of two students at the school, told WBRC-TV.

In Georgia, Atlanta Archbishop Gregory J. Hartmayer has instructed priests not to sign letters from parishioners requesting general religious exemptions from getting the covid-19 vaccine.

In an excerpt from a memo sent Aug. 13, Hartmayer wrote that based on the Congregation for the Doctrine of the Faith, the church body responsible for defending morals and the Catholic doctrine, it is "morally acceptable" to receive the vaccine.

Because of that determination, "the church cannot provide a general exemption," said Hartmayer, who is vaccinated and has encouraged parishioners and others to get the covid-19 vaccine.

There has been a great deal of hesitancy about getting the vaccine among many in Georgia, which has seen an alarming uptick in hospitalizations, largely from people who are unvaccinated. The surge of illness, fueled by the highly contagious delta variant, has taxed the state's health care system and hospital staffs.

On Friday, the state passed a somber milestone, more than 20,000 Georgia deaths from the virus, according to the Georgia Department of Public Health.

Some Georgia businesses, local governments and places of worship are requiring employees and members to be vaccinated. Some restaurants and arts venues are also requiring proof of vaccination from diners and attendees. Metro Atlanta's largest private colleges and universities, including Atlanta's historically black colleges and universities, are also requiring students, and faculty and staff members to be vaccinated to be on campus this semester.

Some Georgia businesses that have mandated vaccinations for employees also have consequences ranging from termination to financial penalties.

Delta Air Lines, for example, which requires new hires to get vaccinated, plans to charge unvaccinated employees an extra $200 a month beginning in November as part of the company's health care plans.

The Atlanta-based carrier will also require unvaccinated employees to be tested weekly for the coronavirus starting Sept. 12 while cases are high.

A spokesman for Delta said the company will consider religious exemptions and expects to provide more detail about that process in the weeks ahead.

Some organizations are considering medical and religious exemptions to getting the vaccine from their employees, students and guests.

People can seek personal exemptions, but they will have to do so without a signature from the church, according to the communications office.

Last month Pope Francis appeared in a video for the nonprofit Ad Council and the COVID Collaborative that advocated for people to get the vaccine.

"Thanks to God's grace and to the work of many, we now have vaccines to protect us from covid-19," the pope said in the message, according to Reuters.

"They grant us the hope of ending the pandemic, but only if they are available to all, and if we work together, the pope said.

Information for this article was contributed by Emma Goldberg and Emily Anthes of The New York Times; by Melissa Healy of the Los Angeles Times (TNS); and by Shelia Poole of The Atlanta Journal-Constitution (TNS).

Print Headline: Since June, covid-19 illness in kids way up