UAPB spreads out carries to grind out win over Lane 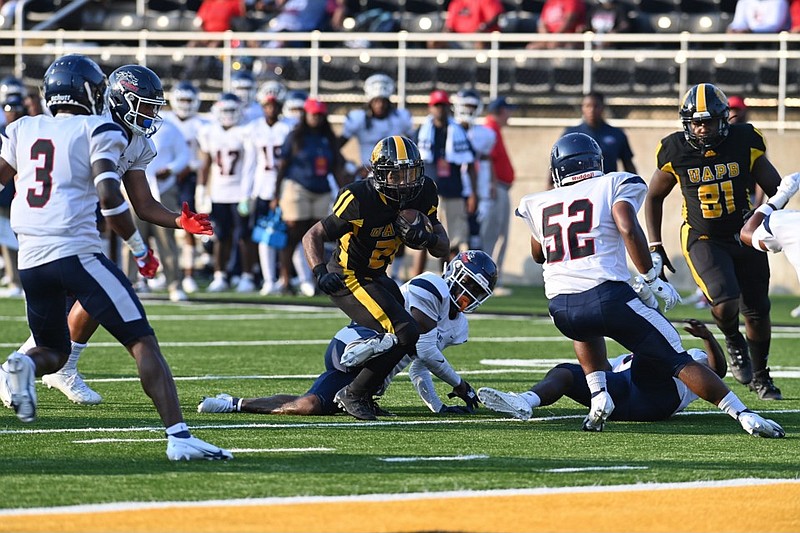 UAPB senior Kierre Crossley rushes into the end zone for a touchdwon against Lane College on Saturday in Pine Bluff. (Special to The Commercial/Darlena Roberts)

PINE BLUFF -- The University of Arkansas-Pine Bluff played a September football game for the first time in two years.

Just four months since their last game, the Golden Lions saw a three-touchdown lead dwindle to an eight-point margin before relying on defense and a fourth-quarter touchdown by a true freshman to take a 34-16 win over Division II Lane College before 8,749 at Simmons Bank Field on Saturday night.

UAPB (1-0) played five games during the spring, which made up for losing the fall 2020 season amid the coronavirus pandemic. Lane (0-1), based in Jackson, Tenn., had its entire 2020 slate canceled.

Freshman running back Kayvon Britten put an exclamation mark on Saturday's victory, spinning off defenders on a 28-yard touchdown run with 4:24 remaining. He finished with 58 yards on seven carries as part of a balanced running attack seeking to regain its identity two years removed from back-to-back 1,000-yard seasons by Taeyler Porter.

Quarterback Skyler Perry led UAPB's ground game with 79 yards on 13 carries and completed 18 of 31 passes for 189 yards and a touchdown. His 10-yard completion to Daemon Dawkins with 9:19 left before halftime gave the Golden Lions a 21-3 lead.

UAPB rushed 44 times for 275 yards, with seven different players carrying the ball. Crossley, a senior transfer from the University of Central Arkansas, scored the opening touchdown less than four minutes into the game on a 2-yard carry. Crossley rushed 11 times for 52 yards.

Kailon Davis recovered a fumble in Lane's end zone with 1:42 left in the period to put UAPB ahead 14-0.

Zack Piwniczka went 2 for 2 on field goals, connecting on the first from 23 yards out with 3:01 to go to make it 24-3. Lane then made things interesting.

With 1:17 left before halftime, quarterback Tarik McKinzie threw a 59-yard strike to Ojoshua Bunton (Earle) to pull the Dragons within 24-10.

The Dragons forced the Lions into a three-and-out and found some momentum. Three plays and 73 yards later, with the help of a pass interference flag against the Lions, Anthony Evelyn dove for a 9-yard touchdown pass from McKinzie with 1.1 seconds left. Noah Shalz, who had converted a 23-yard field goal earlier in the quarter, missed the extra point as Lane pulled within 24-16.

A quick UAPB three-and-out gave Lane new hope just before halftime. The Dragons went down 73 yards in three plays, with the help of a pass interference call against the Lions. Anthony Evelyn, in man-to-man coverage, scooped up a low throw in the end zone from 9 yards left with 1.1 seconds left before halftime to pull Lane within 24-16.

Piwniczka kicked a 20-yard field goal with 3:53 left in the third to bump UAPB's lead to 27-16. Sophomore defensive back Tyquan Fleming then picked off a McKinzie pass in the end zone to end the Dragons' threat.

McKinzie completed 17 of 30 passes for 247 yards and 2 touchdowns. Bunton had two catches for 62 yards.

The win gave UAPB a warmup for its first in-state test of the season at UCA in two weeks.

Print Headline: UAPB spreads out carries to grind out win over Lane