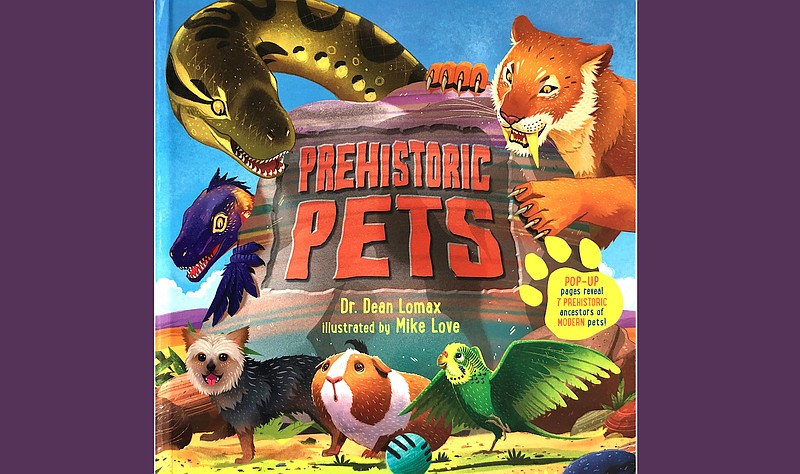 Having watched such things being ripped and dismantled by little paws, Read to Me has a healthy distrust of pop-up books and books with tabs that slide in and out. But the world does have some dexterous and careful children in it, mostly the children of librarians, I imagine, and for them, "Prehistoric Pets" would be a perfectly fine pop-up book.

It relates contemporary pet-shop animals to their prehistoric ancestors. Read fascinating facts about the pets, then lift a flap to unfold impressively large and possibly razor-toothed ancestors.

Some of the pet-facts surprised me, such as the information that goldfish do not automatically turn belly-up after three months in the fishbowl. On some level, I suppose I did know that goldfish are carp; but to read that Bubbles the shiny pet-store carp is capable of finning around in its boring fashion for 44 years ... well, it makes you hesitate to bring home a goldfish.

Now lift the flap to behold Bubbles' 54-foot, ray-finned ancestor Leedsichthys, and — wow — it's not surprising that some of that thing's bones once upon a time were mistaken for the bones of a stegosaur.

Lomax, a paleontologist, dishes up a delightful assortment of impressive ancient-critter facts for each of the seven animals featured. For instance, he explains that Leedsichthys weighed as much as seven African elephants and was as long as a humpback whale. This probably explains why gouges found in Switzerland that are thought to have been made by this ancient goldfish kin while it scraped shellfish off the sea floor to crunch, crunch, crunch between its round and stubby nutcracker-like teeth are said to look like troughs.

Although a pop-up book is inherently unlikely to last 44 years, this colorful thing is informative and thoroughly entertaining.