Grown: How to become a foster parent in Arkansas 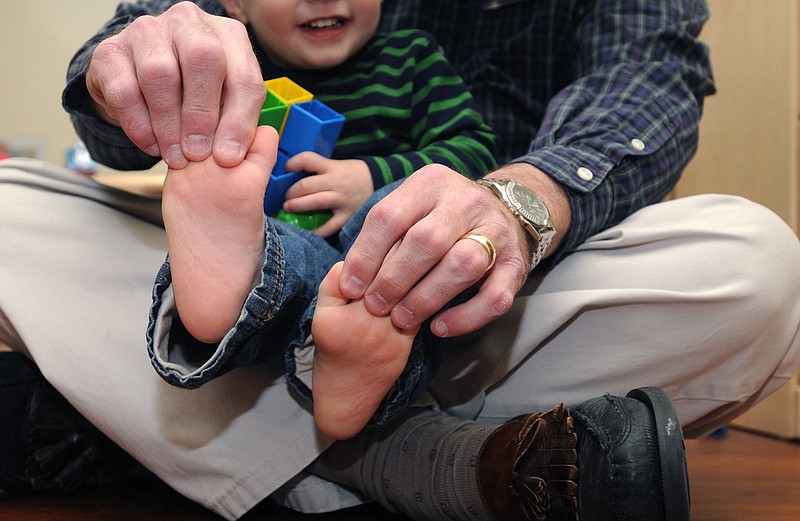 Greg Russell, then the marketing director of the Northwest Arkansas Children's Shelter, plays with a child in the infant playroom at the shelter in Bentonville in this Nov. 30, 2011, file photo. (Arkansas Democrat-Gazette file photo)

There are about 4,800 Arkansas children currently in foster care, according to Department of Human Services officials, but just 1,500 or so foster families.

For Arkansans who want to open their home to children in need, here are the basics on requirements and the certification process to become foster parents.

Alexus Raymo, public information coordinator for the Division of Children and Family Services, said the most basic requirement to become a foster parent is being at least 21 years old. Single people or married couples can apply, she said.

Keith Metz, a former public information coordinator for DCFS now with another department in DHS, said the next two most common questions from prospective foster parents is whether they need to be wealthy or live in a large home.

There are no specific income requirements from the state, but Metz said foster parents must be financially stable without the assistance they would receive from the state while caring for a foster child.

As far as the physical home, the state’s main requirement is that each bedroom should have at least 50 square feet of space per child.

There are additional requirements that are assessed during the certification process, but Metz said not to worry too much about that when making an initial inquiry into becoming a foster parent, which can be done at https://dhs.arkansas.gov/dcfs/fcadoptinq/FCA_Inquiry.aspx.

“The key thing that we want folks to know at that point of inquiry is that we just need you to be interested in helping kids,” Metz said. “We'll work with you along the way to make sure that the kids that get placed with you, that they're a good fit for your home, that you're a good fit for those kids.”

After an initial inquiry, Raymo said someone from DCFS will follow up and answer any questions from the prospective foster parent before they send in a formal application.

Everyone in the home that is at least 14 years old will go through a background check, and then Raymo said there will be a home inspection.

The inspection is of the physical space of the home to make sure it meets licensing and safety requirements. Raymo said if something isn’t adequate, such as a pool without a gate, the family will be given the chance to make changes to bring the home up to standards.

Around the same time, Raymo said, prospective parents enroll in a 30-hour training course. There is flexibility in when the course is offered, Raymo said, and the administrator of the course will work with families to find a schedule that works for them.

“It's more of a group thing because there's multiple families and whatever's best for the group,” she said. “So it may be six weeks of full Saturdays, or twice a week, these families may go to two or three hour classes — just whatever they decide.”

Other parts of the process for certification include physicals, turning in financial documents, and a home study, which is not of physical space but rather the family and its members.

At the end of the process, Raymo said there is an orientation to get to know the staff of DCFS and a final walkthrough of the family’s home to make sure it’s ready to be opened to children.

From start to finish, Raymo said the certification process takes an average of six months.

“We don't want to make that a quick process and leave out anything important that those folks are going to need to make sure this is the right decision for their family,” she said, adding that even it the process seems long, "it's all designed to make sure that the match is a good one.”

Metz said DCFS welcomes Arkansans interested in adoption, but while the process to be certified to adopt or foster is the same, the intentions for fostering and adoption are different.

Foster homes take in children for a temporary placement with the intention they will be reunited with their biological family.

Raymo said that, although sometimes a foster child is unable to be reunited with their biological family and foster parents end up adopting them, that is not the goal going into fostering.

People interested in adoption take in children whose biological parents no longer have rights to them, with the intention of making those children a part of their family permanently.

Such children technically come into a family’s home as a foster placement, but only until an adoption is finalized.

Metz said the system is in particular need of foster homes for teenagers. He said some people worry they won’t be able to offer the experiences and support a teen needs, but he said he believes teenagers are in some ways easier to care for than younger children.

“They're more able to tell you what they're feeling, what they're thinking about, what they're afraid of, what they're anxious about, more so than the younger kid might be,” he said. “Sometimes they don't know how to do that in a calm tone of voice, but you don't have to guess at what they need.”

Raymo said there is also a particular need for foster homes for siblings. DCFS tries to keep siblings together to limit the disruptions to families.

Finally, Metz said prospective foster parents don’t need to worry about being unable to foster because they work full-time or have a busy schedule.

“We are not looking for perfect storybook parents — those things don't exist,” he said. “We want and need regular folks, regular families who have regular requirements, regular things that they have to get done.”