Biden orders millions to get vaccinations 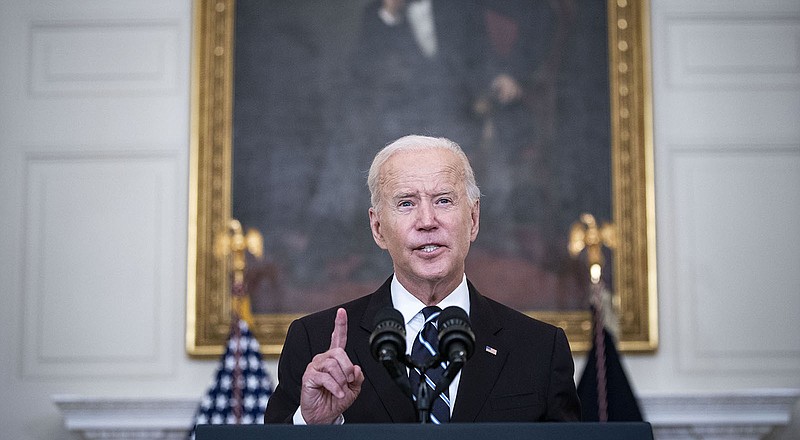 “We can and we will turn the tide on covid-19,” President Joe Biden said Thursday at the White House as he announced new mandates for vaccines. (The New York Times/Al Drago)

WASHINGTON -- President Joe Biden announced new covid vaccine mandates Thursday designed to affect tens of millions of Americans, ordering all businesses with more than 100 employees to require their workers to be inoculated or face weekly testing.

Biden also said he would require all health care facilities that accept Medicare or Medicaid funding to vaccinate their employees, which the White House believes will cover 50,000 locations.

And the president signed an executive order compelling all federal employees to get vaccinated -- without an option for those who prefer to be regularly tested instead -- to create a model that he hopes state governments will embrace. He's also ordering all staff members in Head Start programs, along with Department of Defense and federally operated schools for American Indians, to be vaccinated.

"We have the tools to combat the virus -- if we can come together as a country and use those tools," said Biden in an address Thursday evening from the State Dining Room before laying out his plans. "We can and we will turn the tide on covid-19."

"We can and we will turn the tide on covid-19," he declared.

Taken together, the moves represent an escalation by Biden of the pressure against those who have stubbornly resisted vaccination. The announcement comes amid growing signs that the highly contagious delta variant and persistent vaccine resistance are combining to drag out the pandemic, slow the economic recovery and prevent Biden from turning his focus to other matters.

[Video not showing up above? Click here to watch » arkansasonline.com/910mandate/]

Biden showed a newly antagonistic tone toward the unvaccinated Thursday, underlining his shift from cajoling to coercion, as he blamed those still refusing to get shots for harming other Americans.

"We've been patient. But our patience is wearing thin, and your refusal has cost all of us," he said, all but biting off his words. The unvaccinated minority "can cause a lot of damage, and they are."

The delta variant has upended calculations on the virus, sending new infections surging to more than 150,000 a day and daily deaths to 1,500. At the same time, Biden's approval rating has fallen in recent weeks, with Americans less supportive of his handling of the pandemic. Defeating the pandemic was among he central promises, and White House aides believe that his ability to deliver on it will be critical to the success of his presidency.

Biden's announcement thrusts his administration into new territory, and it's not entirely clear how the new rules -- which still have to be written -- will work. The most far-reaching is likely to be a regulation requiring all businesses with more than 100 employees either to mandate vaccinations for all their workers or require them to take weekly coronavirus tests.

The White House estimates that the policy will affect about 80 million workers, or two-thirds of the country's workforce. Businesses that ignore the mandate could face up to $14,000 per violation.

[Video not showing up above? Click here to watch » arkansasonline.com/910pediatrics/]

The Labor Department has the authority to order companies to take specific actions to protect their workers if the secretary determines that they face a grave danger, said an official who briefed reporters before the president's speech on the condition that his name would not be used.

Republican leaders -- and some union chiefs -- said Biden was going too far in trying to muscle private companies and workers, a certain sign of legal challenges to come.

Georgia Gov. Brian Kemp signaled court challenges even before Biden had finished speaking. "I will pursue every legal option available to the state of Georgia to stop this blatantly unlawful overreach by the Biden administration," Kemp tweeted.

Gov. Henry McMaster of South Carolina said in a statement that "Biden and the radical Democrats [have] thumbed their noses at the Constitution," while AFL-CIO National President Everett Kelley insisted that "changes like this should be negotiated with our bargaining units where appropriate."

On the other hand, there were strong words of praise for Biden's efforts to get the nation vaccinated from the American Medical Association, the National Association of Manufacturers and the Business Roundtable -- though that was no direct mention of his mandate for private companies.

Businesses also will be required to give workers paid time off to get vaccinated.

Some business leaders offered initial support for Biden's plan. Joshua Bolten, president of the Business Roundtable, said the group "welcomes the Biden administration's fight against covid," adding that "America's business leaders know how critical vaccination and testing are in defeating the pandemic."

"These 'pandemic politics,' as I refer to it, are making people sick, causing unvaccinated people to die. We cannot allow these actions to stand in the way of protecting a large majority of Americans who have done their part."

"I'm very much in favor of making and encouraging mandates," said Anthony Fauci, Biden's chief medical adviser, in a brief interview after the president's speech. "This was not just superficial stuff, this is going to have a significant impact."

As part of the plan, Biden also calls on states to enact vaccine mandates for staff members in schools -- although he is not proposing any penalty for states that do not heed his call. According to the White House, nine states along with the District of Columbia and Puerto Rico already mandate staff members to be vaccinated.

The American Federation of Teachers, the country's second-largest teachers union applauded the effort. "We stand in complete support of this plan and of the administration's effort to protect as many people as possible," the union's president, Randi Weingarten, said in a statement.

But the largest union representing federal workers pushed back against the new policy. "Changes like this should be negotiated with our bargaining units where appropriate," said Everett Kelley, the president of the American Federation of Government Employees, which represents 700,000 federal and Washington, D.C., government workers. "Put simply, workers deserve a voice in their working conditions."

The new vaccine requirement will apply not just to the roughly 2.1 million federal employees but also to the millions of contractors that do business with the government. It follows a policy announced by the Pentagon in August making vaccinations mandatory for the military.

An AP-NORC poll conducted in August found 55% of Americans in favor of requiring government workers to be fully vaccinated, compared with 21% opposed. Similar majorities also backed vaccine mandates for health care workers, teachers working at K-12 schools and workers who interact with the public, as at restaurants and stores.

Unlike a requirement for federal workers that Biden announced earlier this summer, the executive order will no longer allow regular testing to serve as a substitute for vaccination, according to a person familiar with the plans who was not authorized to comment publicly and spoke on the condition of anonymity.

White House press secretary Jen Psaki, speaking ahead of Biden's remarks Thursday, said federal workers will have roughly 75 days to be fully vaccinated. If employees do not comply, they will undergo the standard disciplinary process for federal workers, she said.

There will be exemptions from the mandate for people with disabilities, or those who decline for religious reasons.

"We would like to be a model to what we think other businesses and organizations should do around the country," Psaki said.

Biden also said he will invoke the Defense Production Act to have more rapid covid tests manufactured. And he said he struck a deal with retailers Kroger, Walmart and Amazon to sell those tests at cost. Amazon founder Jeff Bezos owns the Washington Post.

And he said the Transportation Security Administration would double fines on passengers who refuse to wear masks, among other steps.

"If you break the rules, be prepared to pay -- and by the way, show some respect," Biden said, in a reference to angry airline passengers who refuse to mask up.

The changes are far-reaching -- but even with the new policies, Biden is not using all of the tools available to him to mandate vaccines. For instance, the new rules stop short of mandating vaccinations in order for Americans to travel between states on planes or trains, a step that Biden could take, said Lawrence Gostin, the director of the O'Neill Institute for National and Global Health Law at Georgetown Law School.

But he offered praise for Biden's approach, saying the president has "done more than any other president has for a vaccination campaign and mandates in the history of America -- so we have to give him credit for that."

Another step that Biden has avoided is setting up a federal verification system for people to prove they are vaccinated. This has confounded many public health experts.

"These measures have the potential to have a big impact on where we are, and the reason is that mandates work," said Richard Besser, former acting director of the CDC and president and chief executive of the Robert Wood Johnson Foundation. "There's nothing in there about how you verify vaccination, so there's no call in there for a federal tool, an app or something else to do that. ... If you're moving towards mandates, having something that is truly secure and trusted could be very helpful."

Until now, Biden has used mandates in limited circumstances and instead used the federal government to set an example with the hope that state and local government officials along with companies would follow suit.

He has seen some limited success. The Los Angeles County School District voted Thursday to mandate vaccinations for anyone 12 and up to be able to attend school in person as anxieties mount about school reopenings.

Several large businesses -- including Walmart, McDonald's and Delta Air Lines -- followed with vaccine mandates of their own shortly after Biden announced the policy in late July that would require federal workers to get vaccinations or be subject to testing twice a week. At the time, the White House cast the policy as a bold step that would allow federal agencies to safely resume operations in the office and in person. Those found to be lying about their status were to face discipline or possible dismissal.

But in the month and a half since that order, the delta variant has presented a major challenge to efforts to get the pandemic under control.

The political landscape has also appeared to shift -- vaccinations started ticking back up after stagnating for several weeks, with many hesitant Americans driven by fear of the delta variant's lethality or compelled to get shots because of workplace mandates. But those numbers are also inflated by some Americans seeking out their own additional booster shots.

The Food and Drug Administration also granted the Pfizer-BioNTech vaccine full approval, making it easier for the government and businesses to impose mandates. The agency is expected to grant full approval to vaccines from Moderna and Johnson & Johnson in the coming months.

Biden's measures should help, but what's really needed is a change in mindset for many people, said Dr. Joshua Sharfstein, vice dean at the Johns Hopkins Bloomberg School of Public Health in Baltimore.

"There is an aspect to this now that has to do with our country being so divided," Sharfstein said. "This has become so politicized that people can't see the value of a vaccination that can save their lives. Our own divisions are preventing us from ending a pandemic."

Information for this article was contributed by Annie Linskey, Yasmeen Abutaleb, Seung Min Kim and Lisa Rein of The Washington Post; by Zeke Miller, Anne D'Innocenzio, Ricardo Alonso-Zaldivar and Hannah Fingerhut of The Associated Press; and by Sheryl Gay Stolberg and Katie Rogers of The New York Times.