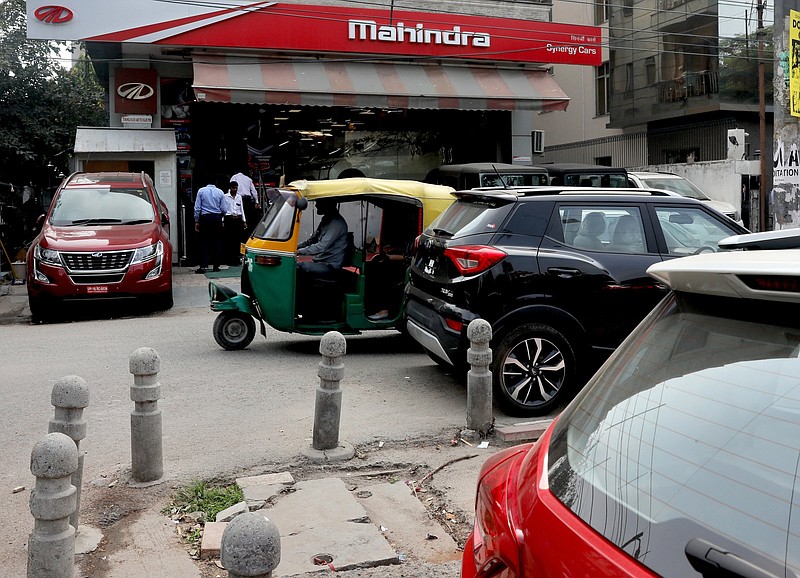 A three-wheeler passes a Mahindra and Mahindra showroom in New Delhi in this file photo. Ford, which had a partnership with Mahindra, said Thursday that it will cease auto production in India. (AP)

Ford will cease auto production in India after logging accumulated operating losses of more than $2 billion over the past 10 years.

Closing plants in India will lead to about 4,000 job losses, the company said in a filing Thursday with the U.S. Securities and Exchange Commission.

New Chief Executive Officer Jim Farley has signaled he will no longer pour capital into marginal markets that provide little or no return. In January, Ford said it would cease more than a century of manufacturing in Brazil and took a $4.1 billion charge. Farley instead is pushing deeper into China, the world's largest auto market, where Ford's Lincoln luxury line now sells more models than it does in the U.S.

Farley signaled almost immediately after taking the top job at Ford last year that the company was taking another look at countries with fast-growing economies that had been expected to drive sales for the Detroit automaker.

"We are taking difficult but necessary actions to deliver a sustainably profitable business longer-term and allocate our capital to grow and create value in the right areas," Farley said. "Despite investing significantly in India, Ford has accumulated more than $2 billion of operating losses over the past 10 years and demand for new vehicles has been much weaker than forecast."

Ford recorded nearly $1 billion non-operating write-down of assets in 2019, according to the company.

The company's moves come months after it dropped a plan to cede most of its Indian operations to local sport utility vehicle maker Mahindra and Mahindra Ltd.

[Video not showing up above? Click here to watch » arkansasonline.com/910ford/]

The production of cars in India for sale in the country is ending immediately and Ford will wind down production at Sanand, a vehicle and engine assembly plant with about 3,000 workers, by the fourth quarter. Vehicle and engine manufacturing in Chennai, which employs around 5,000, will end by the second quarter of next year.

Parts service, and warranty support in India will still be available, Ford said, and the company will continue to operate engineering, technology, and business segments in India.

Ford Motor Co. will begin importing vehicles like the Mustang coupe in India. It will sell off current inventories in India of its Figo, Aspire, Freestyle, EcoSport and Endeavour models.

Foreign automakers have found it difficult to gain a foothold in the value-conscious Indian market dominated by Maruti Suzuki India Ltd.'s cheap cars. The government's high tax regime, which imposes levies as high as 28% on gasoline vehicles, has also been a major roadblock. Toyota Motor Corp. last year said it won't expand further in India because of high tariffs, while Harley-Davidson Inc. has exited the market. General Motors Co. pulled out in 2017.

Ford India had a market share of just 1.42% in August, compared with 1.9% a year ago, data from Federation of Automobile Dealers Associations showed. The local units of Japan's Suzuki Motor Corp. and South Korea's Hyundai Motor Co. together control more than 60% of the market.

The retreat by Ford is a further blow to Prime Minister Narendra Modi's Make-in-India program, which encourages companies to manufacture locally. Tesla Inc. has urged Modi's administration to allow it to import cars more cheaply before it commits to setting up a factory in the country.

Ford was one of the first global car companies to enter India when the economy opened up in the early 1990s. The company first set up shop in 1926 but shut down its initial operation in the 1950s.

The move calls into the question the future of the EcoSport small SUV in the U.S., which the company had been importing from India. Ford introduced the model in the U.S. in 2018, but it has had little success. Sales are down 22% in the U.S. this year.

Information for this article was contributed by Michelle Chapman of The Associated Press and by Ragini Saxena and Keith Naughton of Bloomberg News (WPNS).