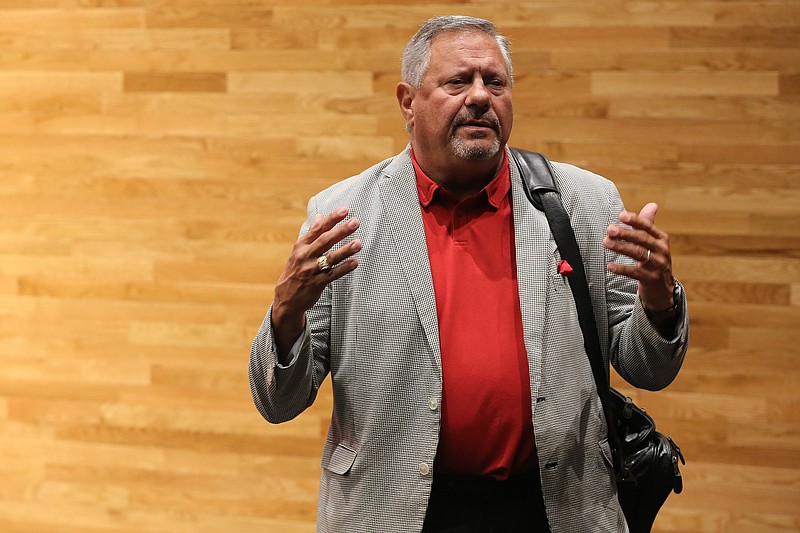 Nobody knows exactly when the Arkansas State-Memphis series became known as the Paint Bucket Bowl. And it's been years since that infamous bucket has even been seen.

So while there may not be a physical prize up for grabs this evening when the Red Wolves (1-0) and Tigers (1-0) meet in Jonesboro for the first time in nine years, it'll still be a contest with plenty of meaning for both sides. Memphis has won 30 of the 59 matchups, including 37-24 last year, but the Tigers haven't left Centennial Bank Stadium victorious since 2004.

The series might lack significance to many of those on the field -- last year's meeting in Memphis was the first time the two schools had played since 2013 -- but it has meaning to fans and alumni. The Tigers' home stadium, the Liberty Bowl, sits only 75 miles southeast of Jonesboro, and the two universities have recently revived series in other sports.

One person who understands the rivalry between ASU and Memphis as well as anybody is Red Wolves Athletic Director Tom Bowen. Before coming to ASU in March, Bowen spent seven years in the same role with the Tigers, helping reignite a football program that hadn't had a winning record since 2007.

Bowen, along with former Red Wolves athletic director Terry Mohajir, agreed on a deal in April 2016 that would see the programs meet on the football field in four straight seasons from 2020-23. And given that the two were good friends, Bowen remembers it being a pretty smooth process.

Last year's meeting in Memphis was a one-score game until the Tigers scored consecutive touchdowns late in the third quarter to stretch things out.

Yet it's hard to draw too many parallels between that game and tonight's. Memphis' starting quarterback from last fall, Brady White, is gone, having graduated after the 2020 season. So too is Blake Anderson, ASU's former coach who departed for Utah State in the offseason, and the Red Wolves have also had to replace Jonathan Adams and Jamal Jones, their leading receiver and rusher, respectively.

Enter Butch Jones, who made his ASU debut a week ago with a 40-21 home win against Central Arkansas.

"What makes college football special is the tradition and pageantry that surrounds it," said Jones, who told reporters earlier in the week he's been studying up on the history between the two programs. "As players, you have to focus on the task at hand and we can't get off track [beacause it's] a rivalry game."

That's not to mention the fact that eight current Red Wolves played their high school football in the state of Tennessee, including a trio of linemen that call Bluff City home.

Although ASU and Memphis may not cross paths as often on the recruiting trail as often under Jones, they'll still compete for some regional prospects. And there's also conference pride at stake -- the Red Wolves have been one of the better Sun Belt teams over the last decade and the Tigers have been a consistent presence in the American Athletic since the league's founding, winning a conference championship in 2019.

With realignment talk very much in the news this week and the future of both schools' respective leagues somewhat murky, the on-field matchup represents a chance for both teams to again validate their place in an evolving Group of 5 landscape.

"[A strong rivalry] creates national attention and curiosity," Bowen said. "This is a big game being played on a big stage."

NOTEWORTHY Memphis is a 5-point favorite over ASU. … The Red Wolves have lost two straight against the Tigers — both in Memphis — but won back-to-back home games versus their local rivals in 2011 and 2012, the last time these teams met in Jonesboro. … Tigers Coach Ryan Silverfield is 3-1 in non-conference matchups since taking over for Mike Norvell when the now-Florida State head coach left prior to Memphis’ 2019 bowl game. … The Tigers will start true freshman Seth Henigan for the second straight week after Memphis said earlier this week that Arizona transfer Grant Gunnell will undergo surgery Monday. … ASU will once again enter game day without publicly announcing a starting quarterback, with Coach Butch Jones again choosing between redshirt junior Layne Hatcher and redshirt senior James Blackman. … Dating back to 2020’s season finale, Red Wolves wideout Corey Rucker has piled up 7 touchdowns and 448 yards on 18 catches over his last two games.