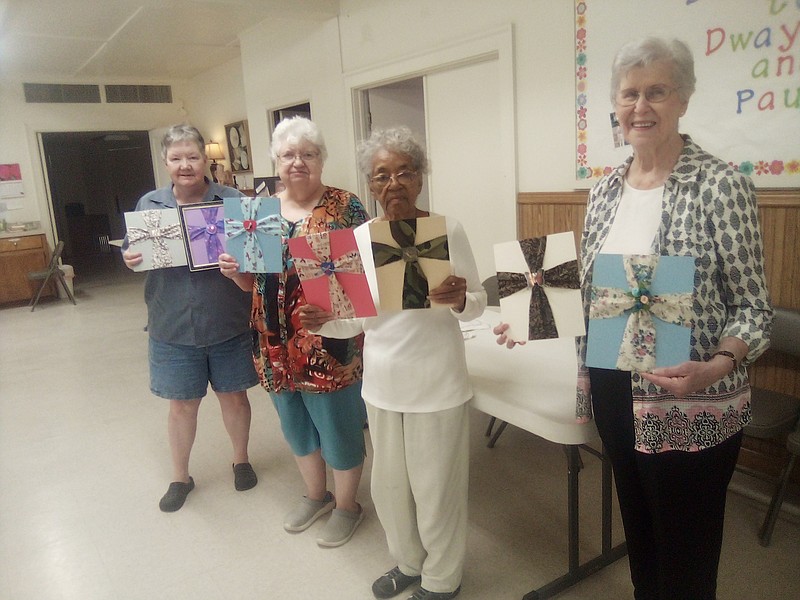 Grand Prairie Quilt Society members show off their fabric crosses they made at the demonstration. (Special to The Commercial)

The Grand Prairie Quilt Society met Sept. 8 at the fellowship hall of First Christian Church at Stuttgart for their Sit n' Sew with seven members present.

The leader opened the meeting with the thought for the day, "I'm creative....you can't expect me to be neat, too!"

The August minutes and treasurer's reports were given. September Happy Birthday greetings were extended to two members with a special presentation of a tote bag to the leader in appreciation of her many years of directing the group, according to a news release.

Registration for the Country Quilt Camp VIII on June 2-5, 2022, is now open. The group has eight signed up so far.

In Show and Share, members brought their special quilts and their stories to share with the group.

The leader had a Double Wedding Ring quilt made by her grandmother, Mary Rawls, around 1900. She also showed the group several little dresses and tote bags she made for the Christmas Shoe Boxes.

A member had two quilts made by her mother. One she repurposed into a table cover. The other was in a Bowtie pattern.

A member had a quilt of many colors made from the disappearing 9-patch method. She also had several of the microwave bowl cozies.

A member had a quilt made by her aunt, Anna Richenback. Her aunt wanted to make a quilt for each niece and nephew. This particular quilt was supposed to go to the member's cousin, but since the member had helped her aunt with it, her aunt decided to give it to her.

The group leader also gave some hints on how to care for a vintage quilt: be sure to wrap it in a muslin sheet or pillowcase, no cardboard or wood should touch the quilt. It is advisable to refold and reposition the quilt every so often so it doesn't get creased or worn.

One member demonstrated how to make a fabric cross. She had all the materials for members to choose their favorite design.

"A lot of hilarity ensued as we all tried to tie the right knots...pull everything straight.... and glue everything down in the right place. We had a lot of fun and ended up with a lovely cross to display," according to a spokesman.

After the business session, everyone settled down to sew. At lunch time, much discussion ensued as members reminisced about their quilts and upcoming projects.

During the sewing session: members worked on a baby quilt, made teaching dolls for Arkansas Children's Hospital, did needlepoint, cut out more outfits for the shoe boxes, and cut out a pattern for a pillowcase dress.

The group discussed a field trip to the new B & J's Grocery at Roe for the October meeting. After the meeting, the members will have lunch. A member has several of her mother's quilts displayed at the store. The group will meet at the church at 9:45 a.m. Oct. 13 and will carpool to Roe. The DeWitt members will meet the group there.