Some doctors, nurses among covid misinformers 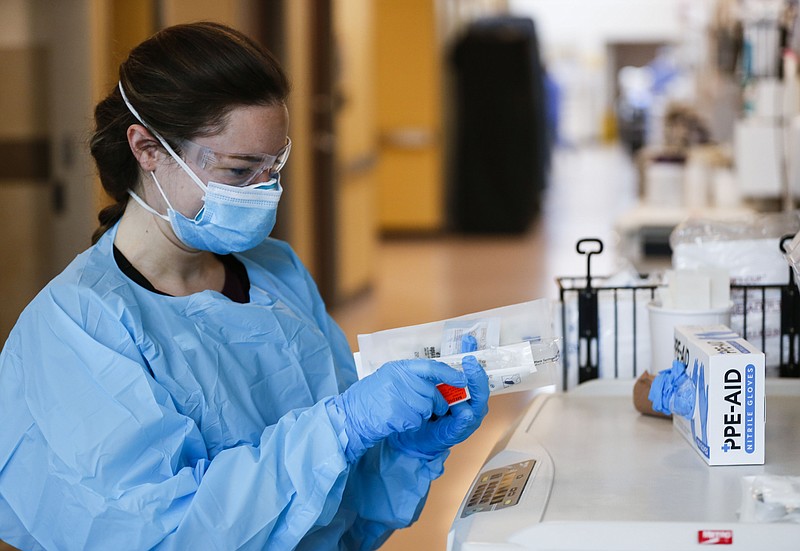 Nurses and doctors in the CoxHealth Emergency Department in Springfield, Mo., don personal protective equipment to treat patients with COVID-19, Friday, July 16, 2021. Southwest Missouri is seeing a surge in Delta variant cases, with hospitals nearing capacity and requesting help from the state for staffing and an alternative care site. (Nathan Papes/The Springfield News-Leader via AP)

As the United States faces down a viral surge based on the contagious delta virus and some medical experts warn of superspreader events, other doctors and nurses have shared false facts about covid-19, becoming misinformation superspreaders.

As the number of covid-19 cases in the county rose sharply, Scott Levy, chief medical officer at Doylestown Hospital in Bucks County, Pennsylvania, tried to warn the crowd at the Aug. 31 meeting of the Central Bucks School Board amid a debate over school mask mandates.

"We've gone from 10 cases a week diagnosed at Doylestown Hospital first week of July," he began.

Levy never was able to finish his statement over the crowd's hearty disapproval.

The person who spoke before him, Kayla Ottey, who identified herself as a pediatric nurse practitioner and a parent of a 7-year-old, received a warmer response. She warned of developmental delays, psychological and physiological harm, even suicide stemming from mandates requiring children to wear protective masks.

"Maybe I am wrong," said Ottey, 31, who works at Children's Hospital of Philadelphia and said in an interview later that mask mandates cause trauma to children. "And I will never say that I'm right, but with what facts that I have in front of me, and what I'm seeing, and what I experienced, and what I've gone through in the last 18 months, that's my truth."

In fact, scientific evidence indicates masks are preventing disease from spreading at no risk to wearers.

Ottey is among the trained medical professionals touting misinformation about covid-19 prevention and treatment that, many fear, are discouraging vaccination and even lengthening the pandemic.

"I think it's an evil thing to do," said Paul Offit, a pediatrician and director of the Vaccine Education Center at Children's Hospital of Philadelphia. "It causes people to make decisions that can kill themselves or others."

The American Academy of Pediatrics has issued guidance that face masks are safe for most children over 2 to wear, and that they protect both the wearer and those around them from covid-19 and other respiratory infections.

Experts fear that a deepening distrust of expertise among many Americans, the reach offered by social media, and national politicians who promote bogus covid-19 theories are creating a welcoming environment for doctors and nurses who traffic in dangerous falsehoods that can be both alluring and bewildering given how quickly knowledge of covid-19 has evolved.

"When are we talking about honest differences of opinion and when are we talking about a flagrant disregard of standards of care?" asked Richard Baron, a doctor and head of the Philadelphia-based American Board of Internal Medicine. "With respect to some of the behavior we're seeing it really is in contravention of pretty solid professional science."

Misinformation has fed wishful thinking -- like that covid-19 is no worse than the flu -- or hopes for a quick cure -- hydroxychloroquine -- since the first months of the pandemic in the U.S. This year, vaccines have been a focal point for disinformation, contributing to just 54% of the country being fully vaccinated, well below the number needed to curb the pandemic, Offit said.

"That only a little over half the American population has been vaccinated is remarkable to me," he said. "They think they're being lied to."

Governors of New Jersey and Pennsylvania declared mask mandates for students, but school board meetings continue to be a frequent scene of official-sounding misinformation. Parents have been showing up at school board meetings with CO2 meters that they hold under their masks, arguing they collect dangerous levels of the gas.

Ottey was one of at least three health-care workers that shared inaccurate or misleading information about masks at the Central Bucks School Board meeting. At the Pennsbury School Board meeting Aug. 19, dissenters to a school masking policy included Rashida Ghauri, a mother of three and a board-certified physician who, with Baber Ghauri, operates a holistic medicine practice in Newtown.

"Masks and face coverings do not work," Rashida Ghauri said at the meeting. "They don't work in preventing the spread of any viral illness"

Among the parents at that meeting was nurse practitioner Ashley Ritter, a founder of Dear Pandemic, a site devoted to sharing accurate information about covid-19. The anti-mask contingent at that meeting was organized, wearing matching shirts, she said, and she was dismayed they found a doctor who shared their agenda.

"All physicians hold respect in society that gives them power," Ritter said in an interview. "Someone with status or a title starts spreading misinformation, it's like a superspreader event."

Covid-19-related hospitalizations and deaths among children still are very rare nationally, less than 400 over the week ending Sept. 8, but they are becoming more common. As of Sept. 9, more than five times as many children were admitted to hospitals due to covid-19 as there were two months earlier, according to the CDC. And children, who are not eligible for vaccination if they're younger than 12, can transmit the virus to others, potentially leading to deadly results if they infect unvaccinated or medically vulnerable adults.

When contacted by a reporter, Baber Ghauri shared by email links to the CDC website, which includes 15 separate studies assessing masks' effectiveness at preventing covid-19 transmission. He also included a link to a video from a doctor and state senator in New Mexico pushing an incorrect interpretation of a masking study from Denmark.

He declined a request for an interview on behalf of Rashida Ghauri.

"Although there has been overwhelming support by the general community on her public comments," Baber Ghauri wrote in an email. "Dr. Ghauri does not enjoy being in the spotlight and has been forced to endure a lot of nonsense for exercising her first amendment rights."

Misinformation from health care workers is permeating society, from doctors' offices to social media. Some doctors have gained national followings peddling falsehoods online and profiting in the process. Locally, one Mullica Hill family physician, Craig Wax, has 15,000 Twitter followers and a radio audience to absorb his anti-vaccination message. He did not respond to a request for an interview made to his office.

Offit said there's really nothing new in trained health professionals pitching ideas contrary to evidence. The scientist responsible for the fraudulent "study" linking vaccines with autism had been respected in his field, as was Peter Duesberg, an acclaimed molecular biologist who insisted HIV did not cause AIDS.

Some are brilliant people who don't recognize the limits of their own expertise, Offit said.

The body of scientific literature is vast, and others may not be able to discern quality studies from junk.

"Certainly a lot of bad science gets published," Offit said. "You really have to work hard to get your paper retracted. It has to not only be wrong, it has to be fraudulent and wrong."

Some seek attention and fame, Baron said. Others are seduced by stories of doctors and scientists who opposed the conventional wisdom of their time, and were later vindicated. When it comes to covid-19 vaccines, though, Baron said, they won't be proven right.

"You've got 1,500 people a day dying from a disease, and you've got a vaccine that's been given to hundreds of millions of people and has a handful of bad outcomes associated with it," he said. "That's not a matter of scientific debate."

Ottey has been a pediatric clinician for 10 years, and said her opposition to masking mandates and vaccine requirements stems from her discomfort with anything that smacks to her of excessive control. Masking and vaccination, she said, must be a choice.

She described herself as deeply principled, and said she may lose her job because she refuses to be vaccinated, citing her faith as the reason.

"I believe where there is risk there has to be choice," she said. "It's very interesting that I am in this position, and I don't know why, but I know that this doesn't feel right."

Plenty of Americans share that passion for independence and free choice. But scientists say covid-19 is a matter of public safety, not rugged individualism.

"This isn't about curtailing people's freedom of speech," Baron said, "this is about saying to the public there are things we really do know."

In July, The Federation of State Medical Boards stated that physicians and other health care workers could risk their state licenses if they spread covid-19 misinformation. Baron's organization issued a statement this week saying physicians' certifications could be withdrawn over such activity.

"We were really wanted mostly to be supporting the people putting out the good information," Baron said. "We're a community of experts who share a brand and derive reputational authority from who we are together."

The Pennsylvania Board of Medicine spokesperson said the agency has received complaints about doctors spreading falsehoods, but would not confirm whether they are investigating. The Wolf administration said this week that it was aware of some physicians that had indicated they would offer blanket endorsements for students seeking exemptions from school mask requirements, and said it would be referring those medical professionals "to the appropriate licensing boards for possible disciplinary action."

Facing such widespread misinformation is a new challenge for the health care field, Baron said, and groups like his are still grappling with how best to respond.

"I think many of us in leadership positions are struggling with what we can do to limit that harm," he said.

Information for this article was contributed by Jonathan Lai of The Philadelphia Inquirer (TNS).