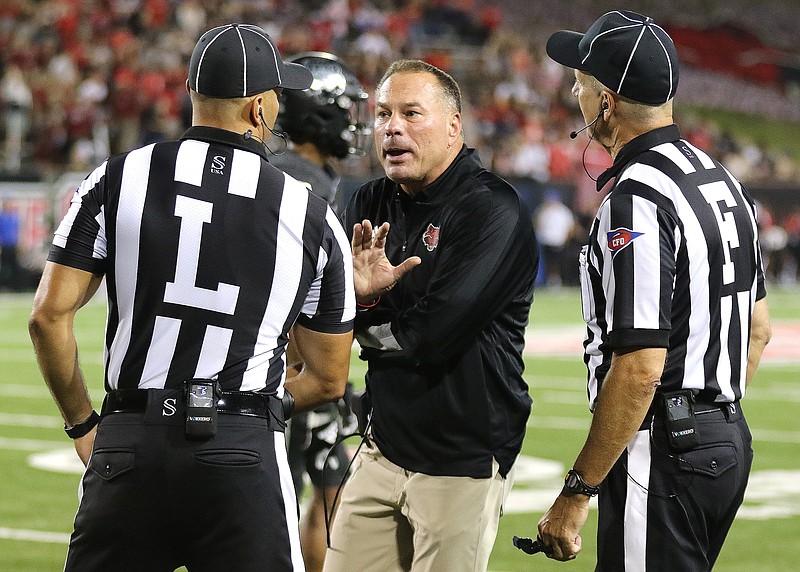 Yes, his hand was forced in a Week 1 victory over Central Arkansas when James Blackman's helmet popped off in the third quarter and Jones had no option but to send Layne Hatcher into the game at quarterback. But Jones then had the option to re-insert his starter and stuck with Hatcher after seeing his backup ignite the Red Wolves' offense.

Yet it was a scheme change he made at halftime that jump-started the Red Wolves this time.

"We knew that it was going to be a physical game and we knew that a 4-yard run would be a good run against this defense," Jones said. "I felt like we could throw the football, so [the second half] we started to throw the ball a little more. ... That's why there's really no such thing as balance because it really goes to what the defense is giving you and taking away from you."

There was no dramatic difference in the type of plays ASU ran during the second half -- 34 of the Red Wolves' 50 snaps were passes, similar to 32 of 48 in the first half. But when Blackman entered, ASU began to air the ball out, something that's worked consistently throughout its first two games.

His first pass traveled 46 yards, landing in Jeff Foreman's hands as he fell to the ground in front of the Memphis bench. The next play, Blackman rolled right, redirected Corey Rucker and hit him for a 23-yard touchdown -- although the ball went at least 30 yards in the air.

When Blackman and the Red Wolves offense came back out for their first series of the fourth quarter, the Florida State transfer linked up with Foreman again on a ball over the middle for 34 yards. Foreman then finished the job, sprinting away from the Memphis defense for an 89-yard score.

Hatcher's 53-yard score in the first quarter came on a long bomb to Te'Vailance Hunt. One of his three touchdowns to Rucker the week before was a 33-yarder into the far corner of the end zone.

By any metric, ASU's passing game has been far superior to its rushing attack, and the breadth of options makes it something Jones may want to lean into even more.

"Our group is so special," Foreman said of his fellow wideouts. "We had a big three my freshman year of Omar [Bayless], Kirk [Merritt] and Jay [Adams]. We just kept passing the torch on, and I feel like this group, we're right there with them or even better."

Combined, the Bayless-Merritt-Adams trio totaled 3,310 yards and 34 touchdowns in 2019. This year's group of Foreman, Hunt and Rucker already has 686 yards and seven scores.

Extrapolate those numbers over a 13-game season and it would come out to better than 4,500 yards and 46 touchdowns.

Now that doesn't factor in guys who could eventually be further integrated into the Red Wolves' passing game.

Akeem Hayes pulled down a late touchdown in the Memphis game and adds another speed threat in the slot along with Rucker. Adam Jones, Butch's son, caught a 21-yarder when ASU went more pass-heavy. Both Lincoln Pare and Alan Lamar have shown themselves to be willing receivers out of the backfield as well.

But when the Red Wolves do go deep, it's likely going to be for one of their main three targets, and both quarterbacks seem to be more comfortable with that kind of offense.

All four of Hatcher's touchdowns against Central Arkansas came on passes at least 10 yards downfield. Blackman completed 8 of his 12 passes longer than 10 yards Saturday night. Nearly all of them have gone to one of ASU's big three.

The recipe for an offense which is averaging the third-most yards in the nation is there.

"Their skill sets compliment one another, they're very, very competitive [and they're] very high-character individuals competing every day," Jones said of Foreman, Hunt and Rucker. "We design a lot of plays that fit their skill sets and we always talk about, 'Don't think plays, think players.' That's what we've been able to do."