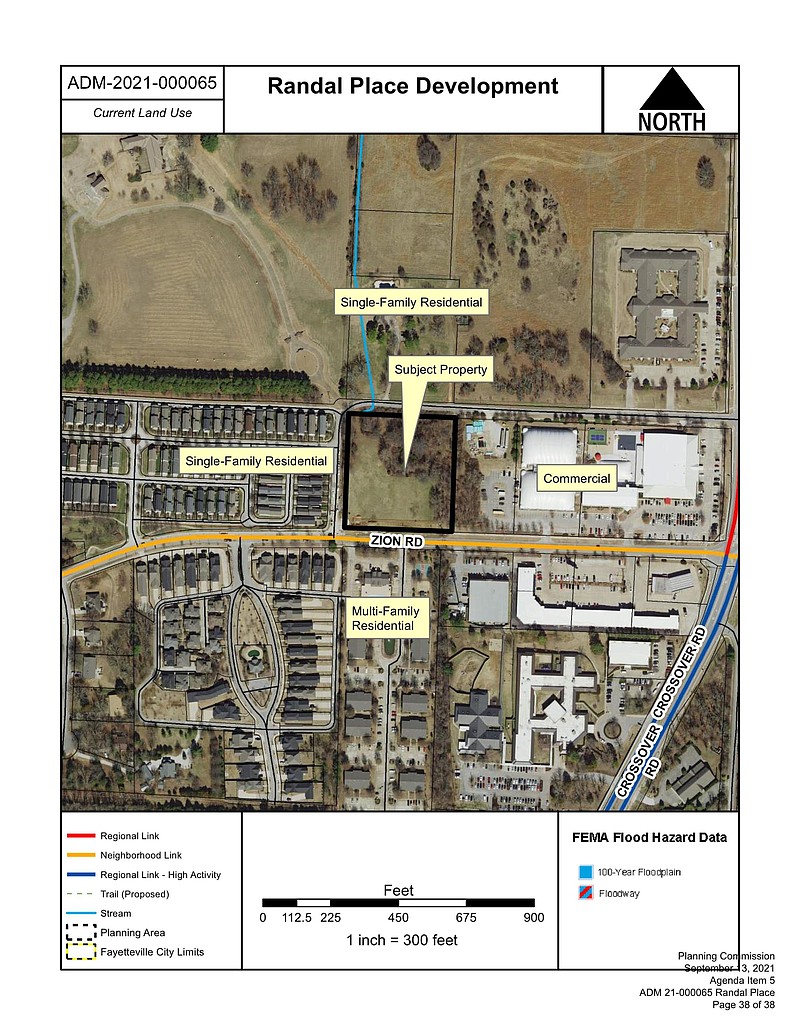 FAYETTEVILLE -- Planning commissioners on Monday upheld city planning staff's approval of a plan for a mixed-use project on the northeast side of town despite a resident appeal asking for revision or rejection of the plan.

The commission voted 8-0 in support of a large-site improvement plan for a development coming to Randal Place and Zion Road, just west of Crossover Road. The city's planning staff approved the plan under the conditions of the property's zoning. The Planning Commission previously approved two variances to city code related to the project.

The Lakewood subdivision homeowner's association appealed the planning staff's decision. The neighborhood lies west of the development. Property owners Donn and Paula Johnson appealed the plan's approval to the Planning Commission on behalf of about 75 other Lakewood residents.

Neighbors said the development would create or compound dangerous traffic conditions. Several residents pointed specifically to on-street parking planned along Zion Road facing the front of commercial buildings. They also said the site did not provide adequate parking for the intended residential and commercial uses. The scale of the project also was incompatible with the suburban nature of the neighborhood and would negatively affect the character of the area, they said.

The plan shows seven buildings. Two commercial buildings consisting of one commercial space and five other retail or office spaces are planned to face Zion Road. Four other residential buildings sit at the northern end of the total 3-acre property, according to the plan.

Much of the discussion centered around parking, especially the dozen or so spaces along Zion. Residents said the intended traffic-calming effect of the spaces ran counter to the idea of getting cars from College Avenue to Crossover Road, which Zion Road links. Additionally, on-street parking was not included in the designs of bond-funded plans voters approved in April 2019.

City Attorney Blake Pennington said the on-street spaces would encroach on the development's property, not the city right of way. Otherwise, using public right of way to serve a private development would be legally questionable. The city's plan to add a turning lane to Zion Road is still intact, said Jonathan Ely, the city's development and construction manager.

The development's plan met the city's minimum requirements for residential parking, Development Review Manager Jessie Masters said. The city only has a maximum parking requirement for commercial spaces. The maximum allowed for the project is 61 spaces, and the development has a proposed 41 commercial parking spaces, she said.

Residents contended that visitors to the development likely would end up parking on public streets in their neighborhood.

"There won't be on-site parking spots for them if the restaurant or whatever is open at the same time," Donn Johnson said. "It'll be kind of a first-come, first-parked situation."

With the Planning Commission upholding the planning staff's decision, it would take a City Council member to appeal the matter to the council on behalf of residents, Pennington said.

In other business, the commission held a preliminary plan for a separate project on the northeast side of town until Sept. 27.

Several residents spoke in opposition of the project during previous Planning Commission and City Council meetings dealing with zoning and annexation of the property. Residents who wrote or spoke to the commission Monday still voiced concern over the amount and quality of water that would flow through the site.