Additions give boost to offense 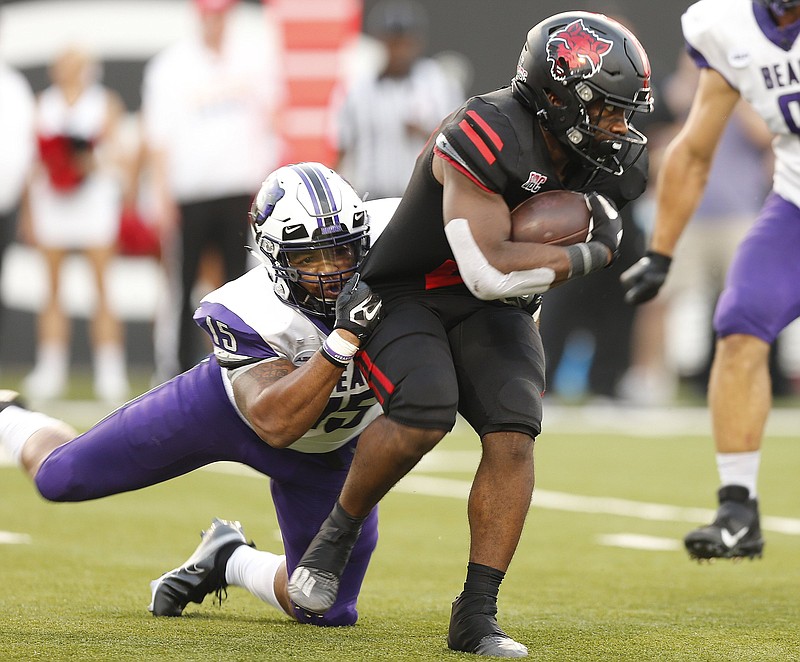 Alan Lamar, a transfer from Yale, has rushed for 90 yards and 1 touchdown in 2 games this year, helping to bolster Arkansas State’s running game. (Arkansas Democrat-Gazette/Thomas Metthe)

JONESBORO -- There were very few certainties with Arkansas State's depth chart heading into the start of the season, but everything pointed to Marcel Murray being a critical piece to the Red Wolf offense.

The 2018 Sun Belt Conference Freshman of the Year followed up his debut campaign with a 2019 season in which he led ASU in both rushing yards and touchdowns. And though 2020 was derailed by injuries, Murray declared himself "the best he's felt since high school" during fall camp.

With a Butch Jones offense committed to running the football, it would have been hard to envision a scenario in which Murray -- who entered Week 1 atop the Red Wolves' depth chart -- with just eight total touches through two games.

Instead, it's been a true running back committee, shouldered by the transfer tandem of Alan Lamar (Yale) and Johnnie Lang Jr. (Iowa State), who have combined for 41 of ASU's 71 rushes thus far. Murray didn't have a single carry Saturday against Memphis, with sophomore Lincoln Pare running six times and catching four passes as well.

Lamar has been the revelation of the group, getting the starting role in consecutive games after being out of football for nearly two years.

It wasn't by choice. The Olive Branch, Miss., native began his collegiate career at Yale, earning freshman All-America honors in 2016 before sitting out 2017 due to injury. Then after two more seasons with the Bulldogs, the Ivy League canceled its 2020 season rather than playing through covid-19.

That gave players like Lamar an extra year of eligibility, and he moved closer to home. Olive Branch, a suburb just south of Memphis, is less than a two-hour drive from Jonesboro.

But the time away from football made jumping back in -- and at the FBS level, no less -- not the most straightforward of tasks.

"The biggest challenge for me has been seeing everything again," Lamar said. "The speed of the game, how everything shakes out post-snap and seeing my keys pre-snap, stuff like that. ... It was all moving fast [at the start of fall camp] but not it's just slowing and I feel like I've grown and gotten back to doing what I'm doing now."

Jones does not comment on injuries and the Red Wolves have given no update on Murray since Week 1, but Lamar shared Tuesday that he suffered a torn right Achilles in February. He went on an accelerated recovery plan and has shown no signs of lingering pain to this point.

While he may take on an even larger brunt of the workload as the season progresses, the most likely outcome is a timeshare with Pare, who was ASU's leading rusher as a true freshman last fall, and Lang, who has shown nice burst when he's been on the field.

Depth doesn't necessarily translate to production, though. While the Red Wolves are third in the nation in total offense, they're just 78th in rushing offense at 150.0 yards per game.

There are still adjustments being made up front -- ASU had to insert Ernesto Ramirez at right guard against the Tigers with Justin Dutton sidelined by a nagging leg injury. But there's an understanding that the Red Wolves need an effective run game to set up the rest of their offense.

"It's not always a thing of the offensive line getting dominated," offensive tackle Andre Harris Jr. said. "Sometimes it's four of five guys doing the right thing and then one guy's off or [has] one bad fundamental or one bad step and then it can mess up the whole play. ... Everyone has to be on point in the run game."

For a third consecutive week, ASU's depth chart does not list a starter. James Blackman and Layne Hatcher remain as co-first-teamers, and during the open portion of practice Tuesday, the pair were evenly splitting reps with the top offensive unit.

"Both individuals have [come in during a game] and I think it speaks volumes to each of these individuals' preparation," Butch Jones said of his quarterbacks. "It's really a tribute to ... staying on task."

There's not much to separate the pair in terms of numbers. Blackman has more yards, throwing for 475 on 54 attempts, yet Hatcher has been the more efficient of the pair -- he's got five touchdowns while completing 70% of his passes.

Boston College transfer Denzel Blackwell was replaced as one of the Red Wolves' two starting outside cornerbacks against Memphis after a rough ASU debut against Central Arkansas. The Bears targeted Blackwell time and time again, attacking the right side of the Red Wolf defense with wideouts Tyler Hudson and Lujuan Winningham.

So Jones opted to slide Little Rock Catholic 's Samy Johnson into the spot opposite Jarius Reimonenq, and the results were somewhat better. Although the Tigers gashed ASU in the passing game, Pro Football Focus gave Johnson a 65.4 defensive grade, second among Red Wolves behind only slot corner Taylon Doss and eighth among all corners in the Sun Belt.

Blackwell, on the other hand, graded as the worst corner in the league and the fifth-worst in the nation through two weeks.

It wouldn't be Seattle without rain, would it?

Current forecasters suggest that there will be rain Friday through Sunday in the Emerald City, with a better than 60% chance of precipitation at the 3:15 p.m. Central kickoff. Temperatures will hover around 60 degrees throughout the game with humidity in the high 70s.

That could factor into ASU's gameplan, especially on the offensive side as the Red Wolves have been much more efficient passing the football. It's hard to say how the weather could impact Washington -- the Huskies have two offensive touchdowns through two games -- but they are clearly much more familiar with the conditions.