Study: Pentagon reliance on contractors hurt U.S. in wars after 9/11 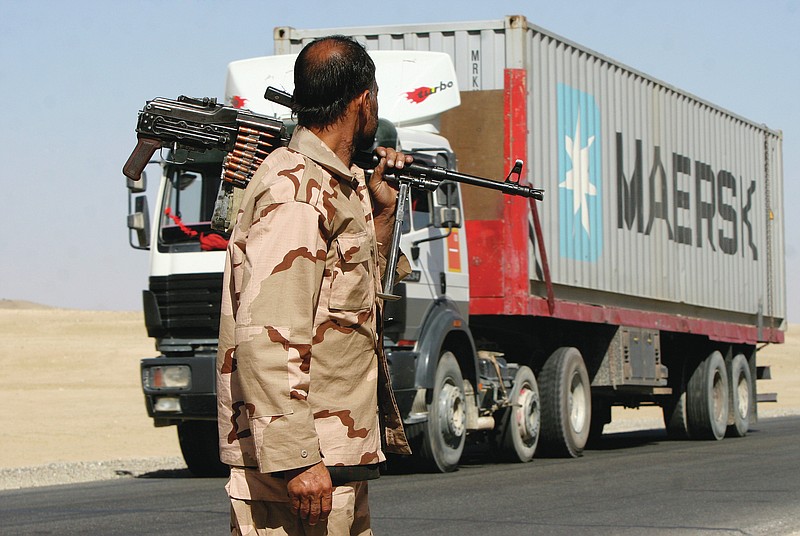 FILE - In this Oct. 27, 2010, file photo a private security contractor watches a NATO supply truck drive past in the province of Ghazni, south-west of Kabul, Afghanistan. Military contractors got up to half of the $14 trillion spent by the Pentagon since 9/11, a study by Brown University&#x2019;s Costs of War project and the Center for International Policy said Monday, Sept. 13, 2021. (AP Photo/Rahmatullah Naikzad, File)

Up to half of the $14 trillion spent by the Pentagon since 9/11 went to for-profit defense contractors, a study released Monday found. It's the latest work to argue the U.S. reliance on private corporations for war-zone duties that used to be done by troops contributed to mission failure in Afghanistan.

In the post-9/11 wars, U.S. corporations contracted by the Defense Department not only handled war-zone logistics like running fuel convoys and staffing chow lines but performed mission-crucial work like training and equipping Afghan security forces -- security forces that collapsed last month as the Taliban swept the country.

Within weeks, and before the U.S. military had even completed its withdrawal from Afghanistan, the Taliban easily routed an Afghan government and military that Americans had spent 20 years and billions of dollars to stand up. President Joe Biden placed blame squarely on the Afghans themselves. "We gave them every chance," he said last month. "What we could not provide them was the will to fight."

But William Hartung, the author of Monday's study by Brown University's Costs of War project and the Center for International Policy, and others say it's essential that Americans examine what role the reliance on private contractors played in the post-9/11 wars. In Afghanistan, that included contractors allegedly paying protection money to warlords and the Taliban themselves, and the Defense Department insisting on equipping the Afghan air force with complex Blackhawk helicopters and other aircraft that few but U.S. contractors knew how to maintain.

"If it were only the money, that would be outrageous enough," Hartung, the director of the arms and security program at the Center for International Policy, said of instances where the Pentagon's reliance on contractors backfired. "But the fact it undermined the mission and put troops at risk is even more outrageous."

At the start of this year, before Biden began the final American withdrawal from Afghanistan, there were far more contractors in Afghanistan and also in Iraq than U.S. troops.

The U.S. saw about 7,000 military members die in all post-9/11 conflicts, and nearly 8,000 contractors, another Costs of War study estimates.

The Professional Services Council, an organization representing businesses contracting with the government, cited a lower figure from the U.S. Department of Labor saying nearly 4,000 federal contractors have been killed since 2001.

A spokeswoman pointed to a statement last month from the organization's president, David J. Berteau: "For almost two decades, government contractors have provided broad and essential support for U.S. and allied forces, for the Afghan military and other elements of the Afghan government, and for humanitarian and economic development assistance."

U.S. officials after the Sept. 11, 2001, attacks embraced private contractors as an essential part of the U.S. military response.

It started with then-Vice President Dick Cheney, the former CEO of Halliburton. Halliburton received more than $30 billion to help set up and run bases, feed troops and carry out other work in Iraq and Afghanistan by 2008, the study says. Cheney and defense contractors argued that relying on private contractors for work that service members did in previous wars would allow for a trimmer U.S. military, and be more efficient and cost effective.

By 2010, Pentagon spending had surged by more than one-third, as the U.S. fought dual wars in Iraq and Afghanistan. In a post-9/11 America, politicians vied to show support for the military in a country grown far more security conscious.

"Any member of Congress who doesn't vote for the funds we need to defend this country will be looking for a new job after next November," the study notes Harry Stonecipher, then the vice president of Boeing, telling The Wall Street Journal the month after the attacks.

And up to a third of the Pentagon contracts went to just five weapons suppliers. Last fiscal year, for example, the money Lockheed Martin alone got from Pentagon contracts was one and a half times the entire budgets of the State Department and the U.S. Agency for International Development, according to the study.

The Pentagon pumped out more contracts than it could oversee, lawmakers and government special investigators said.

For example, a Florida Republican Party official made millions on what lawmakers charged were excess profits when the U.S. granted a one-of-a-kind contract for fuel convoys from Jordan to Iraq, the study notes. The electrocution of at least 18 service members by bad wiring in bases in Iraq, some of it blamed on major contractor Kellogg, Brown and Root, was another of many instances where government investigations pointed to shoddy logistics and reconstruction work.

The stunning Taliban victory last month in Afghanistan is drawing attention now to even graver consequences: the extent to which the U.S. reliance on contractors may have heightened the difficulties of the Afghan security forces.

Jodi Vittori, a former Air Force lieutenant colonel and scholar of corruption and fragile states at the Carnegie Endowment for International Peace who was not involved in the study, points to the U.S. insistence that the Afghan air force use U.S.-made helicopters. Afghans preferred Russian helicopters, which were easier to fly, could be maintained by Afghans and were suited to rugged Afghanistan.

When U.S. contractors pulled out with U.S. troops this spring and summer, taking their knowledge of how to maintain U.S.-provided aircraft with them, top Afghan leaders bitterly complained to the U.S. that it had deprived them of one essential advantage over the Taliban.

Hartung, like others, also points to the corruption engendered by the billions of loosely monitored dollars that the U.S. poured into Afghanistan as one central reason that Afghanistan's U.S.-backed government lost popular support, and Afghan fighters lost morale.

Hillary Clinton, while secretary of state under President Barack Obama, accused defense contractors at risk in war zones of resorting to payoffs to armed groups, making protection money one of the biggest sources of funding for the Taliban.

The United States also relied, in part, on defense contractors to carry out one of the tasks most central to its hopes of success in Afghanistan -- helping to set up and train an Afghan military and other security forces that could stand up to extremist groups and to insurgents, including the Taliban.

Tellingly, Vittori said, it was Afghan commandos who had consistent training by U.S. special operations forces and others who did most of the fighting against the Taliban last month.

Relying less on private contractors, and more on the U.S. military as in past wars, might have given the U.S. better chances of victory in Afghanistan, Vittori noted. She said that would have meant U.S. presidents accepting the political risks of sending more U.S. troops to Afghanistan, and getting more body bags of U.S. troops back.

"Using contractors allowed America to fight a war that a lot of Americans forgot we were fighting," Vittori said. 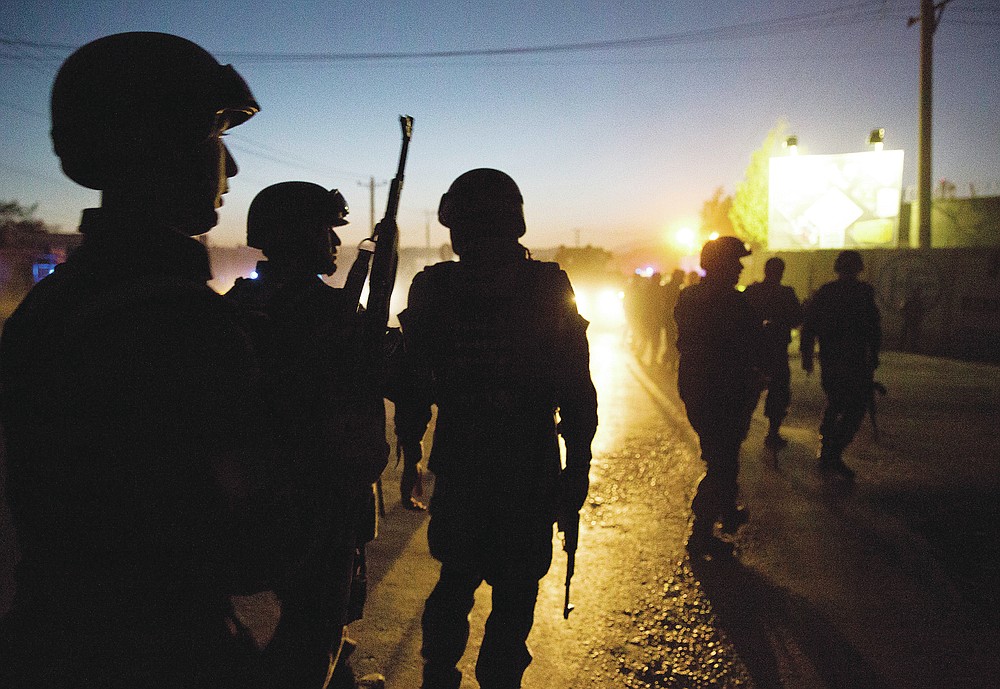 FILE - In this Oct. 18, 2013, file photo Afghan police arrive to secure the area after a car bomb detonated outside an ISAF civilian personnel compound in Kabul, Afghanistan. Police said the assault started at dusk when a car exploded near the gate of a compound, housing contractors from various countries, European diplomatic personnel and United Nations employees. Military contractors got up to half of the $14 trillion spent by the Pentagon since 9/11, a study by Brown University&#x2019;s Costs of War project and the Center for International Policy said Monday, Sept. 13, 2021. The U.S. saw about 7,000 military members die in all post-9/11 conflicts, but nearly 8,000 contractors, another Costs of War study estimates. (AP Photo/Anja Niedringhaus, File)