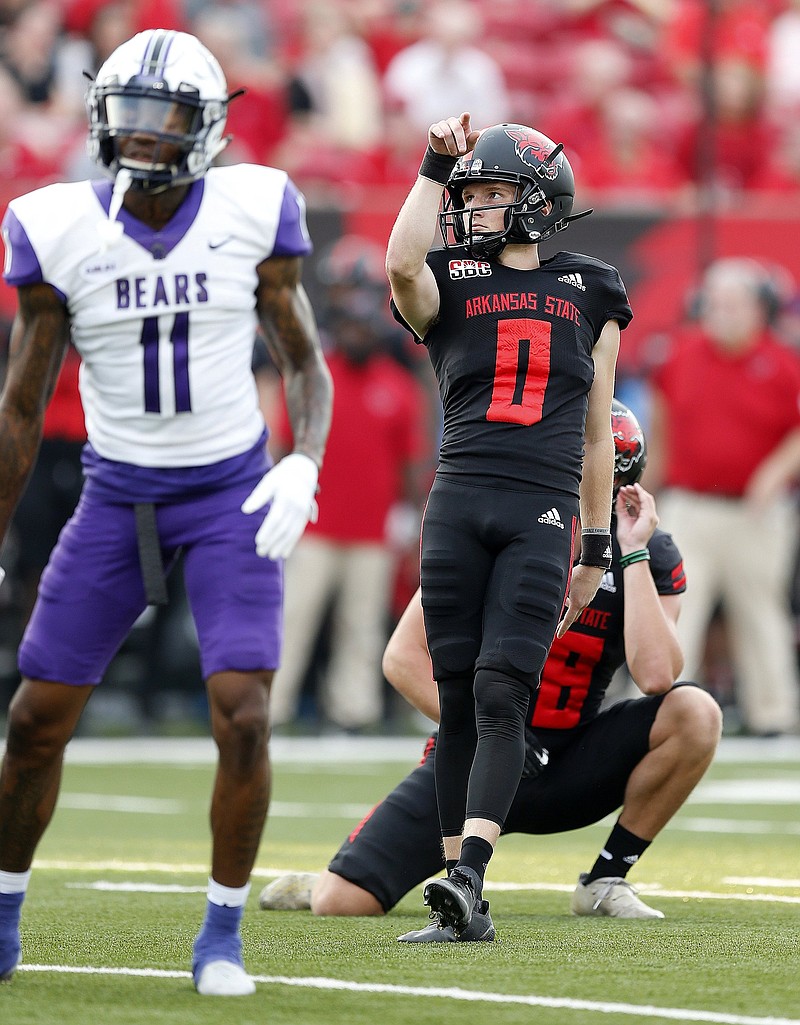 JONESBORO -- Brad Grupe had a particular request when he took his family to Disney World many years ago. The Grupes were staying at Disney's All-Star Village, a sports-themed hotel, and he wanted their room to be near the goalposts that stood outside.

Grupe, a former college kicker at Southeast Missouri State, says kicking "was always the backup plan" for his son, Blake. But if he could nudge Blake just a little bit, he figured it was worth it.

Grupe doesn't hesitate when acknowledging his son has far surpassed him in the kicking game -- the Sedalia, Mo., native entered the 2021 season fourth on Arkansas State's career points list, and after two weeks, Blake has added 24 more to his ledger, putting him 32 points from the all-time Red Wolves' record.

"If you had told me I'd have some of those opportunities to do those things the day I got here, I probably would've called you a liar," Grupe said earlier this week.

What doesn't lie, however, are the numbers that Grupe has been able to post in 37 games.

He's well aware of the accomplishments he could achieve this season -- Grupe has a piece of paper taped in his locker, counting down as he closes in on another spot in ASU history. Yet it's the redshirt senior's belief in his work, along with the progress that's followed, that continues to drive him each time he lines up another kick.

Grupe's path to Jonesboro wasn't all that different from most specialists.

He won a kicking competition at the University of Missouri entering his senior year of high school and the Tigers' staff offered him a preferred walk-on spot. But Missouri had just signed a scholarship kicker, and neither Blake nor Brad thought the younger Grupe would get an opportunity to see the field in Columbia.

They identified the Red Wolves as a landing spot with a kicker set to exhaust his eligibility following Grupe's redshirt season in 201. He spent that year learning behind Sawyer Williams.

Grupe entered the 2018 season without a scholarship but looked to be on track to gain one after he cemented himself as ASU's starter by Week 3.

A hamstring injury, however, resulted in an inconsistent campaign in which Grupe made 14 of 21 field goals. Then-Coach Blake Anderson decided to bring in Tristan Mattson as competition for fall 2019.

It didn't last long. Grupe won the job for a second straight season, breaking the school's single-season points record with 110 and ranking 13th in the nation on his way to earning first-team All-Sun Belt honors.

Coincidentally, both Grupe and Mattson trained with kicking coach Adam Tanalski who identified something in Grupe as soon as they started working together prior to the 2018 season.

Grupe didn't lack for athleticism -- his mom, Sarah, was a college gymnast and his brother Brett currently plays baseball at Central Missouri. Blake had also played several different sports all the way through high school.

At 5-8 and less than 150 pounds, though, Grupe needed confidence. And it's only grown stronger as Grupe and Tanalski have continued to work together, something they do about 15 days a year.

"What we talk about is just being consistent with his plant foot, making sure that he's striking the ball clean, trusting his leg, realizing that he's no longer a freshman ... [but a] muscular, developed college senior who has proven how great he is," Tanalski said. "Blake wants every field goal. He's running out on fourth down, they've got to tell him not to take it.

It took Coach Butch Jones little time to see what he had in his kicker. Entering his fifth season with the Red Wolves, Grupe asserted himself as a leader, not just among ASU's specialists but also the entire team.

"Usually most kickers don't want to have anything to do with any of the combative drills, the running of the hills," Jones said. "Blake's leading the group [in conditioning], challenging guys, so right there. I'm like, 'You know what, this young man's pretty special.'"

Grupe hasn't necessarily changed his body during his ASU career -- his dad says he's tried to put on weight but has never gotten above 153 pounds -- yet he's got more range this season, a product of both his skill work with Tanalski and his strength work with newly hired performance coach Jeff Jones.

He set a career-long last week against Memphis, drilling a 48-yard field goal that would have likely been good from at least 55 yards.

Just as range comes with confidence, the converse is equally true. Jones trusts his kicker from as deep as 52 yards, and Grupe believes he'll be able to make it because of the body of work he's established over two-plus seasons.

"Every kick is a new kick," Grupe said. "Whether it's an extra point or a 48-yarder to win the game, they all feel the same if you prepare [like it's the biggest of your career]."

In December, Grupe will earn his master's in business administration, his second ASU degree after finishing his undergraduate work in three years. He has another season of eligibility due to a bonus year given because of the covid-19 season, but whether Grupe decides to try the pro season after this season or next, Tanalski expects Grupe to get an NFL tryout.

For now, Grupe is bearing down on numerous records. He's on track to break the program's single-season marks for points (126) and made field goals (21), and if the ASU offense's torrid pace continues, Grupe could surpass his own made PAT record (53), not to mention several career marks.

Brad Grupe keeps track of exactly where his son stands -- he's got a similar countdown on his desk back home in Missouri. For Blake, Saturday's game at Washington is another chance to inch toward the top of the ASU record books and show why kicking is certainly no backup plan.

"I told Blake, 'You've got to walk that line between cocky and confident because you can never show weakness,' " Grupe said. "That's probably one of the most things I'm most proud of him, is that he is able to prove people wrong and walk that line for many years."