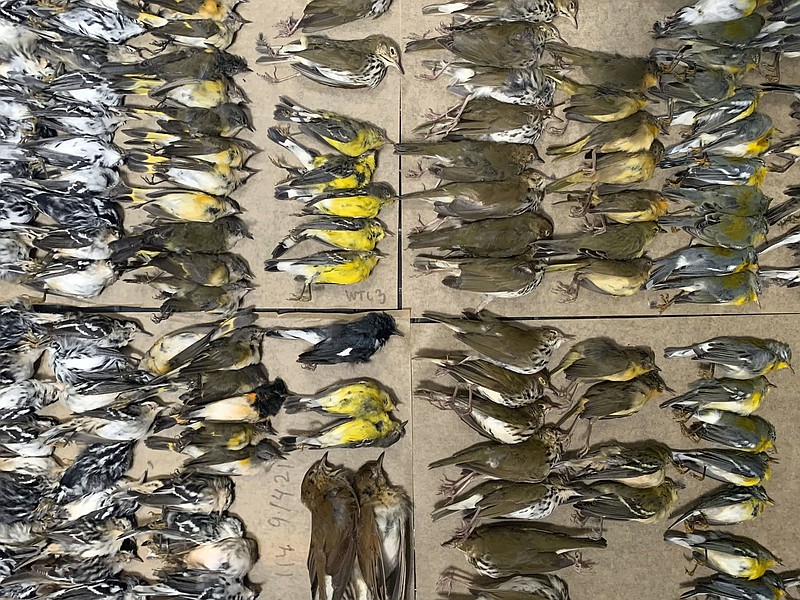 This toll was particularly high, but bird strikes on Manhattan skyscrapers are a problem that NYC Audubon has documented for years, said Kaitlyn Parkins, the group’s associate director of conservation and science.

Stormy weather Monday night into Tuesday contributed to the deaths, she said.

“We had a big storm and sort of weird weather and lots of birds, and that’s sort of the perfect combination that can lead to bird-window collisions,” Parkins said.

“It seems that the storm might have brought the birds in lower than they would have otherwise have been, or just disoriented them,” she said. “The effects of nocturnal light on birds is also quite strong, especially when it’s a cloudy night.” Melissa Breyer, the volunteer who tweeted about finding nearly 300 birds on sidewalks surrounding the new World Trade Center towers, said the experience was “overwhelming.” “As soon as I got to the buildings, the birds were everywhere on the sidewalk,” she said. “Looking north, covered, south, covered, west, covered — the sidewalks were literally covered with birds.”

MINNEAPOLIS — The former Minneapolis police officer convicted of murder in the death of George Floyd pleaded innocent Thursday to violating the civil rights of a teenager in a separate case that involved a restraint similar to the one used on Floyd.

Derek Chauvin was convicted earlier this year on state charges of second-degree unintentional murder, third-degree murder and second-degree manslaughter in Floyd’s 2020 death. He was sentenced to 22½ years in prison. He’s also charged in federal court with violating Floyd’s civil rights when he knelt on the Black man’s neck for about 9½ minutes as Floyd was facedown on the pavement, not resisting and pleading for air.

But another indictment against Chauvin alleges he carried out a similar act against a then-14-year-old boy in 2017. This indictment alleges Chauvin deprived the teenager, who is Black, of his right to be free of unreasonable force when he held the teen by the throat, hit him in the head with a flashlight, and held his knee on the boy’s neck and upper back while he was prone, handcuffed and not resisting.

Thursday’s hearing was held via videoconference, with Chauvin appearing from the state’s maximum-security prison.

According to a police report from the 2017 encounter, Chauvin wrote that the teen resisted arrest and after the teen, whom he described as 6-foot-2 and about 240 pounds, was handcuffed, Chauvin “used body weight to pin” him to the floor. The boy was bleeding from his ear and needed two stitches.

AUSTIN, Texas — Republican Matt Krause, a longtime ally of embattled Texas Attorney General Ken Paxton, said Thursday that he is joining the growing ranks of candidates who will challenge him for his job in 2022.

Paxton is seeking a third term under the cloud of an FBI investigation, set off by a revolt by his top deputes last year, and is still awaiting trial on felony securities fraud charges.

Krause is a Texas state representative who has previously supported Paxton. A member of the conservative House Freedom Caucus, Krause said he saw an opening in the field and said the upheaval in Paxton’s office raises questions about his ability to focus on the job.

“I’ve been a supporter in the past, but new information, new developments have caused me to even consider getting into this race,” Krause said.

ORLANDO, Fla. — More than 20 cats were killed when a fire broke out at an Orlando, Fla., animal shelter, officials said.

Orange County Fire Rescue firefighters found flames “through the roof” when they arrived at the shelter Wednesday night, the agency said on Twitter.

Steve Bardy, executive director of the Pet Alliance of Greater Orlando, called the fire his “worst nightmare.” He told news outlets that rescue crews were able to evacuate all 25 dogs at the shelter. They were farther away from the fire’s point of origin, he said.

“It appears the fire started in the front building by the clinic, which made it more difficult for fire rescue to go into the adjacent cat room,” Bardy told news outlets at the scene. His voice broke as he talked about the fire.

“If you run a shelter, this is literally your worst nightmare — to see your building on fire and know that there are animals in there that you’re charged to care for, and you can’t go in,” he said.