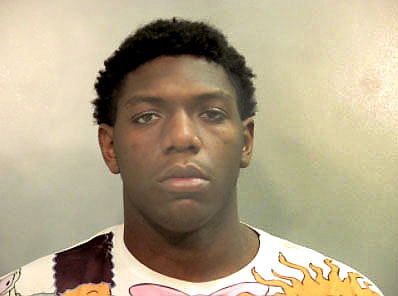 BENTONVILLE -- A local judge set a $500,000 cash bond for a man who failed to report to jail in February after his bond was revoked.

Judge Robin Green presided Thursday over a bond hearing for Jarren Brown, who was arrested in December 2019 in connection with an armed robbery.

Brown, 21, of Springdale is charged with aggravated robbery and theft of property. He has pleaded not guilty to the charges.

A teenager reported Brown, who was at a party, pointed a gun at another person's head and took a backpack, according to the probable cause affidavit.

Brown was later released from the Benton County Jail on $100,000 bond.

Brown was arrested again Jan. 16 in Fayetteville in connection with engaging in violent criminal activity, aggravated assault and terroristic act. He was released the next day on $15,000 bond.

Fayetteville police were called to a home on Bradstreet Lane on a report of shots being fired into the home, according to an affidavit for a warrant of arrest. Officers found Austin Garrett in the street outside the home with gunshot wounds to his buttocks, according to the affidavit.

Occupants of the house reported Brown sent a message with a picture of a gun while also threatening to kill them, according to the affidavit.

Brown started shooting into the home, and some shots fired from the street hit a vehicle parked in front of the home, according to the affidavit. No one in the house was injured, but a man inside, identified in the affidavit only as J.P., picked up an AR-15 and fired at the men outside.

Police said Garrett, 19, of Springdale was Brown's accomplice in the shooting. Garrett was arrested Sept. 5 in connection with accomplice to aggravated assault, terroristic act and engaging in violent criminal group activity.

Green held a hearing in February and revoked Brown's $100,000 bond. She ordered him to report to the Benton County Jail since Brown was not present in the courtroom. The hearing was held via video conferencing.

She set a $250,000 cash only bond for Brown. He didn't report to the jail, and a warrant for his arrest was issued.

Joshua Robinson, deputy prosecuting attorney, recommended at Thursday's hearing that Brown's current bond be revoked and set at $500,000 cash only, which Green agreed to do. Kimberly Weber, Brown's attorney, asked the judge to let the bond remain at $250,000.

Green scheduled Brown's jury trial for March 15. He faces 10 to 40 years or life imprisonment if convicted of the robbery charge.