State taking up to 98 Afghans 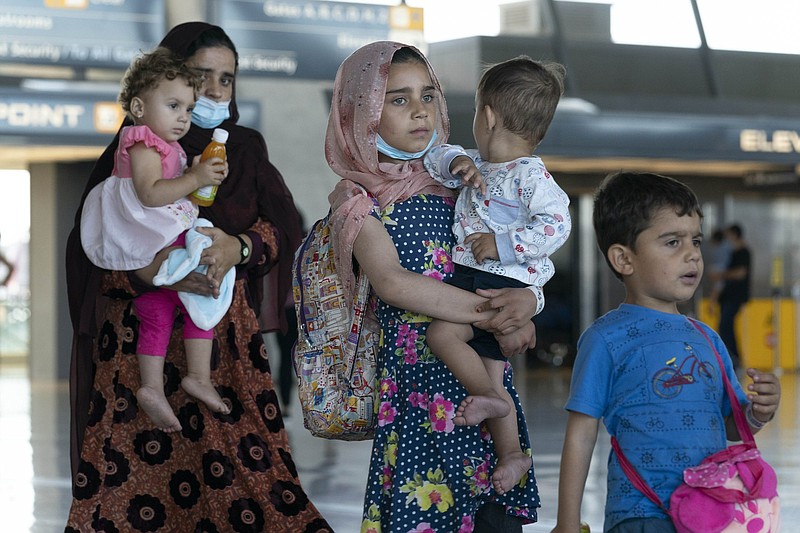 Families evacuated from Kabul, Afghanistan, walk through the terminal before boarding a bus after they arrived Thursday at Washington Dulles International Airport in Chantilly, Va. (AP/Jose Luis Magana)

Arkansas is expected to receive more than 90 Afghan evacuees in the coming weeks and at least one Northwest Arkansas organization will assist in the relocation.

The White House on Wednesday began notifying governors and state refugee coordinators across the country about how many Afghan evacuees from among the first group of nearly 37,000 arrivals are scheduled to be resettled in their states.

Shealyn Sowers, director of communications and spokeswoman for Gov. Asa Hutchinson's office, said Arkansas will receive up to 98 refugees.

Hutchinson said in a news release that his office is still waiting on specific information, but "I have been briefed on the heightened security vetting and comprehensive health screenings, intake, and vaccinations that are being implemented by our federal partners. We are expecting Afghan refugees in the near future with more coming as they are assigned to the resettlement agencies in the state by their national parent organizations."

Hutchinson said refugee relocation is being assisted by faith-based organizations and local sponsors. He said this is being done so refugees can be integrated into life in Arkansas.

[RESETTLING EVACUEES: Map of the United States not appearing above? Click here » arkansasonline.com/coronavirus/916evacuees/]

"These refugees have supported the United States over the past 20 years. We want to help relocate these allies for their protection and the protection of their families from the sure peril they will face if they remain in Afghanistan," he said.

Canopy Northwest Arkansas, a refugee resettlement agency in Fayetteville, confirmed that it will be assisting refugee families over the coming weeks.

Hannah Lee, a spokeswoman for Canopy, said the organization expects to help resettle around 50 Afghans.

"Relocation efforts are extremely robust," she said in an email. "Afghan nationals will go through extensive vetting before ever stepping foot in the (United States). This includes rigorous vetting in select countries, including Italy and Kuwait, before coming to the US. Once here, all Afghan refugees will go to a designated processing site near Dulles Airport, managed by the Department of State 24/7, with 200-250 Department of State/USAID staff working shifts to welcome new arrivals and process them for onward travel to military installations. From there, refugees will be flown to 1 of 8 bases in the United States where they will receive medical screenings and other services. They are then referred to a resettlement site like Canopy."

"There are a multitude of open jobs in Arkansas and the NWA community is overwhelmingly excited to welcome these new neighbors," she said.

Canopy Northwest Arkansas has resettled more than 220 people since its founding in December 2016.

"Refugees undergo the most thorough vetting process of any individual in the US, which takes up to 2 years on average," she said. "Once they are in the US, they are here legally and begin the process of rebuilding their lives. Canopy works with refugees for up to three to five years to help with integration. Ninety-eight percent of Canopy households are financially self-sufficient by Day 180 in the US."

Among neighboring states, Texas is expecting 4,481 refugees; Oklahoma, 1,800; Missouri, 1,200; Tennessee, 415; Louisiana, 59; and Mississippi, 10, according to White House figures released to The Associated Press.

Hawaii, South Dakota, West Virginia, Wyoming and the District of Columbia are not expected to receive any from the first group of evacuees from Afghanistan.

California is projected to receive the most refugees at 5,255, according to the AP.

The Afghan evacuees go through a Department of Homeland Security-coordinated process of security vetting before being admitted. And every evacuee who comes into the United States also goes through health screening. Evacuees who are 12 and older are required to get the coronavirus vaccination as a term of their humanitarian parolee status after entering the country.

Afghan evacuees won't be eligible for food stamps, cash assistance through the Temporary Assistance for Needy Families program, Medicaid or other traditional refugee services that are funded through the U.S. Department of Health and Human Services.

Currently, each Afghan evacuee is to receive $1,225 to help with rent, furniture and food and provide a small amount of pocket money, according to the AP.