What bugged Napoleon recounted in Arkansans' look at insect history 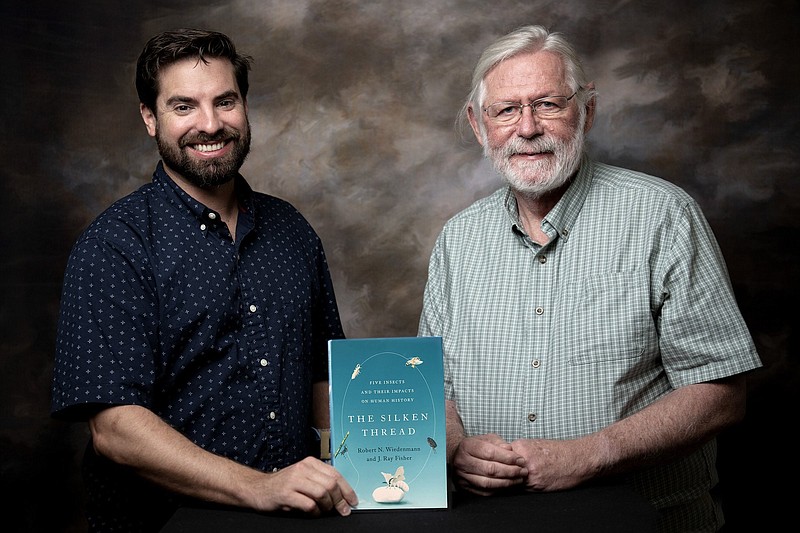 Ray Fisher (left) and Rob Wiedenmann wrote “The Silken Thread, Five Insects and Their Impacts on Human History.” Fisher is a research scientist in entomology. Wiedenmann is a professor emeritus and former entomology department head. (Special to The Commercial/UA System Division of Agriculture/Fred Miller)

If you're happy about reading this story in English instead of French, thank a mosquito.

In 1802, Napoleon Bonaparte was trying to expand his holdings in the Americas when he was stopped short in Haiti. At least 30,000 troops fell to yellow fever and malaria, but mostly yellow fever, delivered by mosquitos. Faced with such devastating loss, the French decided to get out of the New World.

Napoleon and the French sold the Louisiana Purchase, which included Arkansas, to then-President Thomas Jefferson to recoup their investment. The rest is history, according to entomologists Rob Wiedenmann and Ray Fisher.

Wiedenmann is a professor emeritus of entomology and a former entomology department head for the University of Arkansas System Division of Agriculture and the Dale Bumpers College of Agricultural, Food and Life Sciences at the university.

Fisher is a post-doctoral research scientist in entomology for the Arkansas Agricultural Experiment Station, the research arm of the Division of Agriculture.

The pair authored "The Silken Thread: Five Insects and Their Impacts on Human History," published this month by Oxford University Press.

The idea for a book was born from a class Wiedenmann taught called "Insects, Science and History." Originally, an undergraduate course that introduced students from other majors to entomology, he revised the class to include insects' impacts on human life and culture.

After Wiedenmann retired in 2019, he and Fisher, friends since Fisher was working on his Ph.D. at the University of Arkansas, met for lunch regularly, usually at Hammontree's. The Fayetteville restaurant gets a shout-out in the book's acknowledgments. Their conversation frequently turned to stories about the impacts of insects on human history.

"Ray said, 'You should write a book,'" Wiedenmann said.

They decided it was a two-person undertaking. Wiedenmann had what he refers to in the book as "zillions" of stories about the intersection of insect and human history. It was Fisher's idea to trim those zillions down to five.

"He had way too many stories to fit in a book anyone would want to read," Fisher said. "I had to rein him in."

"We began with, 'Can we write a cool history with these five insects?'" Fisher said. "Many insects have had diffuse impacts on history. But these five drove huge leaps in history. They have a very narrative story where they made these right-angle changes in the trajectory of human history."

Just as they began working in earnest, the covid-19 pandemic changed the course of human history in its own way. Wiedenmann and Fisher collaborated mostly by Zoom.

Wiedenmann had the essential elements of history, but they knew they had to find clear historical records and biological evidence to support their narratives. Fisher proved to be the Indiana Jones of historical and entomological research.

"Ray would find these arcane references," Wiedenmann said, adding that those were driving him crazy -- until they didn't anymore.

"The amoeba reference pushed me over the edge," he said. "But it was perfect."

Amoebae eat bacteria, but the bacteria that causes plague has a trick that keeps it from being digested. Instead, uses amoebae to survive under conditions it otherwise could not endure. The full story is in chapter six. You'll love it.

As Wiedenmann and Fisher dug deeper into the stories they wanted to tell, they discovered that much of what they thought they knew about history was wrong.

"Everyone knows that fleas carried on rats caused the Black Death plagues in Europe," Fisher said. "Except they didn't."

Fisher said the oriental rat fleas took the plague bacteria out of Asia, but they didn't cause the rapid spread, turning the plague into the Black Death. Another pest -- human body lice are thought to be the culprits that rapidly spread the first two plagues.

"When we think about the Black Death, everything we thought we knew was wrong," Fisher said.

Wiedenmann said, "I kept asking [my wife] Luann, 'Did you know this?' Almost daily, we were learning that the history we thought we knew was wrong."

Their book is also full of little stories that connected their insect subjects to big historical moments, like the plot to kill Abraham Lincoln with what may have been the first attempt at biological warfare. Before anyone knew that Aedes aegypti mosquitos spread yellow fever, many people believed that clothes worn by the sick could spread the disease.

Dr. Luke Pryor Blackburn, a fervent supporter of the Confederacy and hater of anything northern, collected clothing from yellow fever victims, packaged them up and shipped them to auction houses in northern cities, hoping to infect as many Yankees as possible.

Blackburn even sent one load he claimed could kill at 60 yards to an auction house on Pennsylvania Avenue, a stone's throw from the White House. He hoped Lincoln would pass by and die.

Wiedenmann and Fisher also show how IBM owes a debt of thanks to domestic silkworms for their role in inventing computers. Check out chapter three for that story.

The common thread running through each of these insects' stories is the web of ancient routes collectively called the Silk Roads, by which Chinese marketed silk to the world.

Silk became a major commodity that eventually bound eastern and western civilizations over the Silk Roads.

Those Silk Roads became major routes for many purposes, from trade to war. And the insect subjects of The Silken Thread found their way along those roads -- both coming and going with the caravans that traveled them.

The human body louse and oriental rat flea, both carriers of the Black Death in their times, found their way to Europe, carried by the caravans that traveled the Silk Roads. Aedes aegypti came to the Americas by a different and notorious route but was bound to the Silk Roads by external ties.

Fisher said the connection was sugarcane, which originated in tropical regions of Asia and found its way to Europe over the Silk Roads. But Europeans, wanting to grow the crop for themselves found that the heat-loving plant thrived in the tropics of the New World. But they required a labor force.

The authors relate how the African slave trade originated on the Atlantic island of Madeira and eventually made its way to the Americas.

Yellow fever originated on islands near Madagascar and spread to and across the African continent. When slave traders began raiding western Africa to enslave the peoples there, Aedes aegypti and their deadly hitchhiker were waiting for them.

The mosquitos and yellow fever were transported to the Caribbean on slave ships and eventually spread to the rest of the Americas.

Western honeybees, also known as European honeybees, traveled the Silk Roads in the opposite direction from the other four insects in the book. Honeybees provided a bountiful agricultural product -- honey -- sought in the east. Not to mention the bees' gift of pollination for fruit and vegetable crops.

Poor Napoleon's bad luck didn't begin or end with his disastrous encounter with Aedes aegypti and yellow fever. He was defeated three times by the disease-carrying characters of Wiedenmann's and Fisher's book.

Before he ran out of luck in the New World, Bonaparte's Egypt and Syria campaign was brought up short by oriental rat fleas. He set out with 13,000 troops on that mission.

After losing some 2,000 of them to flea-borne plague, and being hampered by many more sick, Napoleon bailed out of that operation. Finally, his Russian invasion was lost in 1812 when his Grand Armée of 650,000 French and allied troops was reduced to 20,000 who returned home healthy.

Historians mostly attribute that defeat to the fighting spirit of the Russians and the intense cold of the Russian winter, and they're not entirely wrong. But Wiedenmann said many died from typhus, spread when the shivering survivors put on the lice-infested coats of those who died from the disease.

Wiedenmann and Fisher concede that modern historians may not entirely share their perspectives on history. "We're not historians," Wiedenmann said. "We're just entomologists who have a love for history."

Wiedenmann and Fisher say the book was a delightful journey of discovery for its authors.

"The wonderful things we learned along the way had everything to do with how much we enjoyed writing this book," Wiedenmann said.

Wiedenmann and Fisher will hold book signings from 11 a.m. to 1 p.m. Oct 5 at the University of Arkansas Bookstore and from noon to 1 p.m. Nov. 9 at Pearl's Books in downtown Fayetteville.

To learn more about Division of Agriculture research, visit https://aaes.uada.edu/. Follow the agency on Twitter at @ArkAgResearch.