Golden Lions to take on Bears 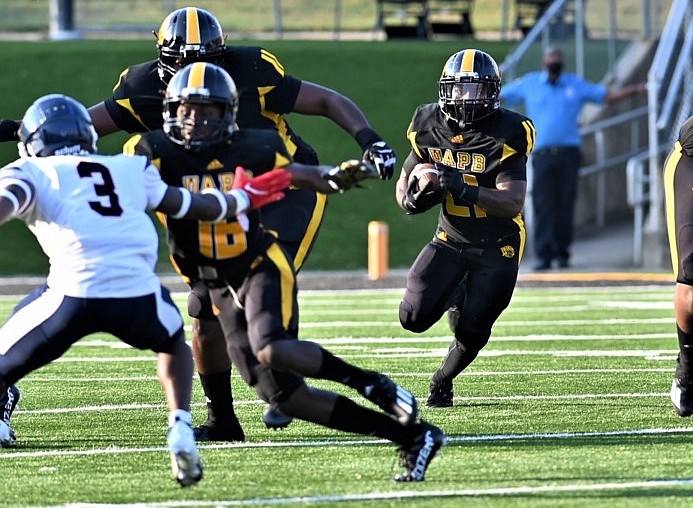 Kierre Crossley built a solid football resume at the University of Central Arkansas.

After redshirting in 2016, Crossley won the Southland Conference Freshman of the Year award in 2017 and was twice named All-Southland honorable mention. He wrapped up a four-year career in Conway with 2,274 career yards (4.93 yards per carry) and 10 touchdowns in 45 games.

But, in Crossley's own words without offering specifics, a lot has changed during his time on "The Stripes," a reference to UCA's purple and gray-striped field.

He'll be back there tonight, likely leading the University of Arkansas at Pine Bluff Golden Lions' (1-0) rushing attack against the Bears (0-2), ranked 25th in the STATS Perform Championship Subdivision poll. Kickoff is set for 6 p.m. at First Security Field at Estes Stadium, with ESPN+ streaming it live and radio coverage on KPBA-FM 99.3 "The Beat".

Crossley, who arrived in Pine Bluff this past summer after graduating from UCA last December with a degree in journalism, said it was a tough decision to leave Conway.

"I didn't know I would get an extra year with covid and everything going on, but the direction of the program was just going a different way from when I got there in 2016," Crossley said. "It's still an excellent program, but there were some things I thought that could be better for me. That's what led to me transferring."

The move has been good for Crossley, so far. Now the elder statesmen in a loaded Golden Lions backfield, the 5-foot-9, 180-pounder scored the team's first touchdown of the season from 2 yards in a 34-16 win over Lane College on Sept. 4. Crossley finished that game with 52 yards on 11 carries, behind quarterback Skyler Perry's 79 yards and freshman Kayvon Britten's 58.

UAPB running backs coach Larry Warner recruited Crossley to UCA and coached him from 2016-17. The two reconnected through the NCAA transfer portal.

"For us, it was a chance to finish what we had started," Warner said. "We have a chance to reunite and do it all over again. We had a nice run game at Central Arkansas, and we seek to do the same at Arkansas-Pine Bluff."

Crossley said his familiarity with Warner drew him to the Lions.

"It was a good opportunity to get back to a familiar type of system and a coaching style," Crossley said. "I just took that opportunity, but both programs are very good programs, and I'm proud to be a part of both of them."

Once Crossley steps foot on "The Stripes" for the first time since UCA's most recent home game last Nov. 14, what his emotions will be is anyone's guess.

Tonight marks the 13th all-time meeting between the Golden Lions and Bears, who were members of the old Arkansas Intercollegiate Conference of the National Association of Intercollegiate Athletics, but the first since UCA's 41-17 victory in Little Rock on Sept. 13, 2008, when Bears great Monte Coleman, a Pine Bluff native, was in his first year leading the Lions.

Under second-year Coach Doc Gamble, UAPB has a chance to write a different chapter in the series and beat UCA for the first time since taking the first two meetings in 1970-71. (UCA leads the all-time series 10-2.)

"The good thing about it for us, we don't know too much about the past history because it's been a long time since we played," Gamble said. "We're always excited about the next opponent, no matter who it is. We're looking forward to going out and playing some football. It doesn't matter who it is. We've got a game at the end of the week, and we're looking forward to going to play them."

Nathan Brown, who was the Bears' quarterback in 2008, is in his fourth season as head coach at his alma mater. The Bears lost 40-21 to Group of Five power Arkansas State University and 43-34 to Missouri State University, now ranked No. 17 by STATS Perform.

Brown has reason to feel that way, given that his Bears led Arkansas State 7-6 at halftime and hung tough with Missouri State's Bears in a top-25 showdown.

Gamble didn't need much convincing how capable the Bears are.

Gamble also highlighted the matchup between UCA's standout receivers, including sophomore Tyler Hudson (235 yards and a touchdown on 10 receptions) and junior Lujuan Willingham (228 yards and two touchdowns on 16 receptions), and UAPB's secondary, which will see Jalon Thigpen make his season debut after sitting out because of injury and freshman Marcus Askew II, who broke up three passes. Sophomore Tyquan Fleming intercepted a pass against Lane.

"It's going to be a good matchup," Gamble said. "It's going to be a sight to see. We've got good players. We've got good DBs. I don't shy away from telling anybody that. You have to be around us to see what we have every day. We've got some depth now, but they're going to have a challenge. But those two guys [Hudson and Willingham], you may get to see them play on Sundays, both of them. They go up and track the football as well as any wideout I've seen in a long time. They're long. They've got great hand-eye coordination. Both of the guys are some really good football players, but we've got some good players, too. We look forward to going and challenging them."

Alcorn State Coach Fred McNair confirmed on an iHeart podcast that the Braves will play at the University of South Alabama tonight despite reports of not being able to conduct practices Monday or Tuesday without a certified athletic trainer on staff, which put the status of upcoming games in limbo. Neither McNair nor Alcorn State has addressed the status of the trainer position.

"It's been very tough for this coaching staff to get in the work we needed in preparation for a really good South Alabama football team," McNair said on the podcast. "They're doing a great job, 2-0. ... It's been a very intriguing week for this program the whole week. As I always say, we're not going to make excuses. We're going to find solutions. The guys are up for the challenge."