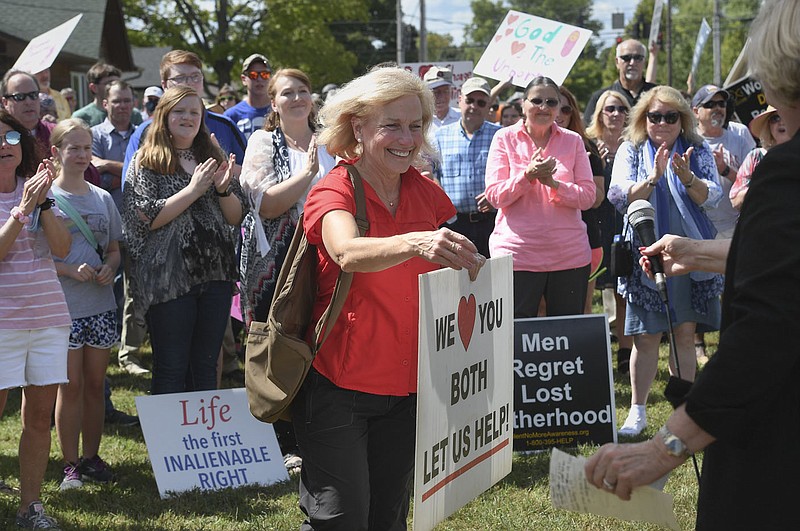 District 91 Rep. Delia Haak prepares to speak, Sunday, September 19, 2021 during an anti-abortion march that started at the parking lot at Locke Supply Co. in Rogers. Lawmakers, state anti-abortion leaders and abortion foes held a march to protest the opening of a Planned Parenthood clinic in Rogers. The clinic is not offering abortions yet, but Planned Parenthood hopes to offer the procedure in the future. Check out nwaonline.com/210920Daily/ for today's photo gallery. (NWA Democrat-Gazette/Charlie Kaijo)

ROGERS -- At least 300 people joined a peaceful protest opposing a Planned Parenthood clinic's opening in Rogers, a march that organizers said was the first steps in a campaign.

Planned Parenthood is not planning to give up either, the company said in response.

Planned Parenthood Great Plains of Kansas City, Mo., returned to Northwest Arkansas when the Rogers Health Center, 1222 W. Poplar St., opened Tuesday. The center offers services including birth control, treatment for sexually transmitted infections and HIV testing and treatment along with gender-affirming care, primary care and more, according to Planned Parenthood. The group announced plans to include abortion options in the future. The Fayetteville clinic was seeing 2,000 patients a year for different services at the time it closed in July 2019, according to the group.

Northwest Arkansas' annual 40 Days for Life prayer vigil will begin Wednesday at the new clinic, Sheila Pursell of the Northwest Arkansas Respect Life Council announced at the 2 p.m. rally held next door to the just-opened clinic. The vigil will last until Oct. 31 for 12 hours a day each day. Participants can make use of a house next door to the new clinic owned by philanthropists Rick and Patty Brunner of Rogers, Pursell said.

Loving Choices, a pregnancy counseling group that favors abortion alternatives, plans to open an office on the other side of the street from the clinic, area director Dana Schwiethale also announced at the rally.

Abortion opponents must do more to support expectant mothers and sustain efforts to provide them with health care, emotional support and basic needs, Sen. Cecile Bledsoe, R-Rogers, and other organizers of Sunday's protest told the crowd.

"We have a cause," Pastor James Longmate of the New Hope Assembly of God told the crowd before protesters walked the three-tenths of a mile from the intersection of Walnut Street and 13th Street to the front lawn of the Brunners' house, which the couple made available to the St. Vincent de Paul Catholic Church in 2011.

At least eight members of Benton County's legislative delegation and one from Sebastian County spoke to the crowd at the hour-long rally next to the clinic, along with Washington County Judge Joseph Wood, state surgeon general Greg Bledsoe and at least three members of the Benton County Quorum Court. At least 11 counterprotesters held signs, shouted and played recorded music from across Poplar Street.

"This means a lot to us to see you here, because in Little Rock crowds like this are on the opposite side," said Sen. Bart Hester, R-Cave Springs. The Legislature meets at the state Capitol in Little Rock, more than 200 miles from Rogers and far away from the base of support of those Northwest Arkansas delegation members who oppose abortion.

Efforts to enact more anti-abortion legislation will not ease, lawmakers told the crowd. Jerry Cox, president of the conservative Family Council, assured the crowd the lawmakers' efforts in that regard would continue.

"I would put our Legislature up against any in the nation" in their opposition to abortion, Cox told the crowd. "This is the most pro-life Legislature that's ever been."

Planned Parenthood's clinic offers nothing except abortion and gender-related treatment that is not already available locally, Pursell said in an interview after the rally.

The Rogers clinic would be the only abortion clinic in Northwest Arkansas. The closest such clinics are in Tulsa, Okla., and Little Rock. The Tulsa Women's Clinic is the closest, according to maps, at 115 miles by road from the new Rogers clinic's location.

Brandon Hill was chief executive officer of Planned Parenthood Great Plains at the time the Fayetteville clinic closed. He cited unspecified "increasing problems with our landlord" as reasons for deciding against renewing its lease. He also said prominent and frequent protests at the site could have led to security issues. Hill also cited an arson earlier that year at a Planned Parenthood clinic in Missouri. The search for a new location started then, Hill said at the time of the 2019 closing. The Fayetteville clinic had opened in 2011.

Pursell told the protest crowd Sunday the problem with the Fayetteville clinic's property owner was that the landlord had a change of heart on the abortion issue and that the security issues claim was not credible.

Sunday's march was at least the second display of public opposition to the Rogers clinic within a week. Several attendees of Tuesday's Rogers City Council urged the council to help close the clinic. The council cannot legally do that, Mayor Greg Hines said at the meeting.

The clinic's opening was not an issue that the city council, planning commission, him or any city entity had the authority to stop, Hines said. It is not something that will come up as matter of a voter decisions or consideration of permitting, he said.

"These are the consequences of what's called the First Amendment of which I have challenged in many ways including beggars on street corners approaching cars in traffic," Hines said. "I took that all the way through and was sued by the ACLU and had to pay settlement fees to try to keep people in our city from being accosted by people."

Council meeting attendee Cassie Fenton said she is a teacher at St. Vincent de Paul Catholic School which she said is about 450 feet from the center and her children also plays at a park across the street from the center.

Fenton said she concerned about the safety of her elementary students and the children playing in the park. She said there are protests at facilities along with increased police presence and threats of violence. She said Planned Parenthood left their facility in Fayetteville out of safety concerns for their patients and staff.

"Fayetteville Planned Parenthood felt it was unsafe for the adults walking in and out of their facility and now we have children playing at that park, the Rogers public park across the street," Fenton said.

Michael Fakutt of Rogers told the council he was angry that the center was located "in a neighborhood of color. "I feel that this organization is unfairly targeting people who live in that neighborhood," he said.

City council member April Legere agreed with Hines that the clinic's operation is not a local government matter.

"How, where, when and with who people seek their personal medical care in not under the purview of local government," she said at the meeting. "It's not about race. It is not about color.

"It's not about disrespect. It's not about an income stream nor is it about the anger of those who chose to speak this evening," she said. "It's simply about health care. I would like to remind us to remember that. We are representing a community for all to have access to the freedoms are privileged to have as citizens of this nation." 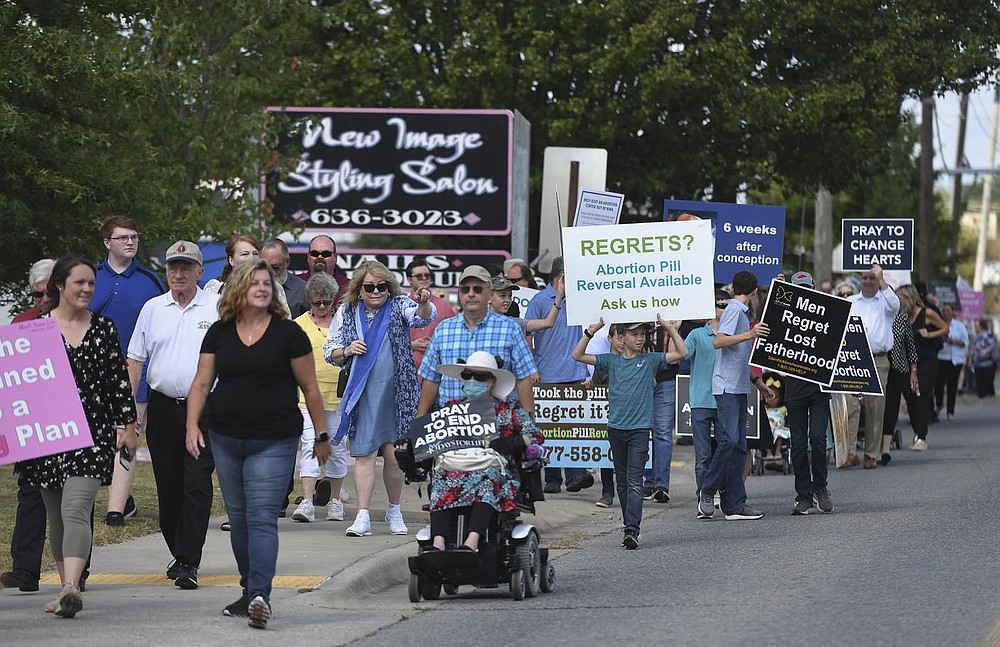 Attendees march, Sunday, September 19, 2021 during an anti-abortion march that started at the parking lot at Locke Supply Co. in Rogers. Lawmakers, state anti-abortion leaders and abortion foes held a march to protest the opening of a Planned Parenthood clinic in Rogers. The clinic is not offering abortions yet, but Planned Parenthood hopes to offer the procedure in the future. Check out nwaonline.com/210920Daily/ for today's photo gallery. (NWA Democrat-Gazette/Charlie Kaijo) 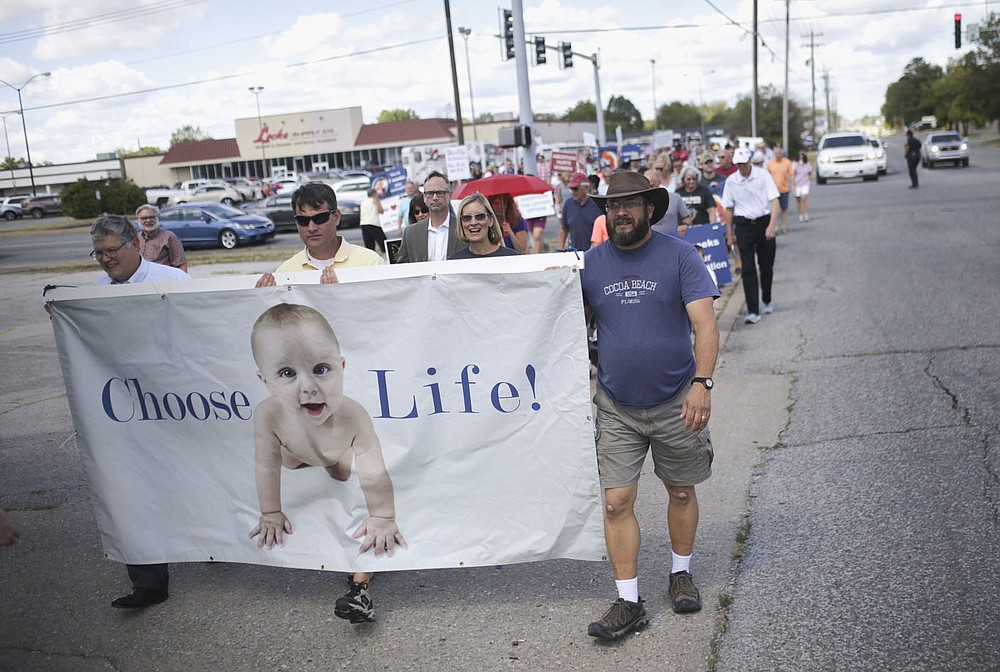 Attendees march, Sunday, September 19, 2021 during an anti-abortion march that started at the parking lot at Locke Supply Co. in Rogers. Lawmakers, state anti-abortion leaders and abortion foes held a march to protest the opening of a Planned Parenthood clinic in Rogers. The clinic is not offering abortions yet, but Planned Parenthood hopes to offer the procedure in the future. Check out nwaonline.com/210920Daily/ for today's photo gallery. (NWA Democrat-Gazette/Charlie Kaijo)
More News